Press review about the invention of Jean Chambrin.

This process was invented by Jean-Pierre Chambrin in the early 1970s, that is to say in the midst of the oil crisis. Mr Chambrin is an engineer and mechanic in Rouen. His process allowed, according to the inventor, to consume a water-alcohol mixture with a certain proportion of water (up to 60%).

Anyway, if the first tests were promising, this invention was never put on the market and Chambrin never revealed the "secret" of its "black box" (the heat exchanger).

This article, published in July 1974, is included in the .pdf press review of the time (available for download below). He is intitulated : “Staggering: I saw the first 'water engine'. "

“An engine runs with 60% water and 40% alcohol”. The news has crossed every newsroom since the start of the year. Here at the "Automobile", the information did not stand up to two discussions. Since the oil crisis [1973] we have been wary of inventors. But this time things are more serious. In the streets of Rouen, a Citroën equipped with a water engine was seen to move like any other car and to undertake a 100 km walk in the surrounding countryside without the slightest boredom. The event goes beyond the narrow limits of the news item; no doubt, the ride turns into a feat.

The meeting point is a garage that displays a provincial mine. The craftsmanship still lives on, and the proper diagnosis of a running out of steam can be done without a computer. The workshop accommodates around ten cars. We are far from the laboratory. 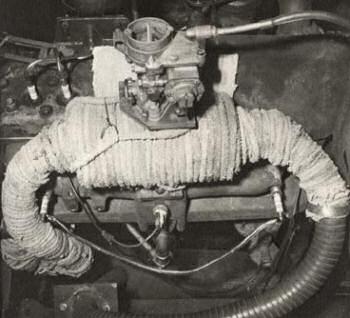 Jean Chambrin and Jack Jojon welcome us. Two good French people, like you and me; in your eyes the joy of explaining to you; in the eyes no pretension, the logic and the formulas we immediately feel it is elsewhere: in the hands, in the head!

The bench is close to the office. It hosts a Dodge engine. Sneering the large water tank tends to feed its plastic pipe while to the right a can of alcohol throws another challenge. 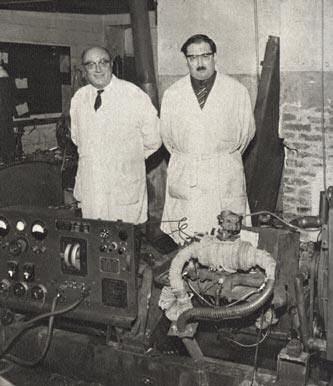 The apprentice fills up with big watering cans that come straight from the tap. We turn two valves, we launch a starter: it turns. "You see it is not more complicated than that". Malice has just lit up Jack Jojon's face for a short time. 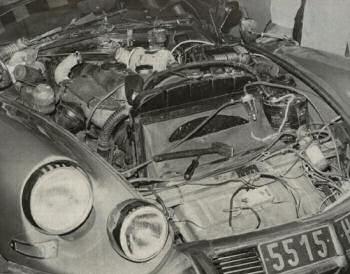 Extracts from an interview with Jean Pierre Chambrin

The water engine, if we can call it that, remains in the current context, a sweet madness. Do you really believe in its industrial development?

Jean Chambrin: “You know the fact that people, and even eminent mathematicians, take us for fools does not change our conviction. We are no longer at the dream stage, we are driving, we are questioning habits in the form of monuments and it is undoubtedly here that the shoe pinches. But rest assured, scientifically we are adults. For us, the main thing is to continue. You had to believe it.

It has been done for fifteen years. What we need now: to convey to the minds of those who make us consume that practical experience and scientific maturity can be the first supporters of great upheavals. "

This engine, do you think give it a quick baptism in a formal way?

“I told you, we are lucid. Our obsession is the proof by 9, it is not the panache of any evening in a ministry or a prefecture. We only work with our own means. Our experiment we carried out on a sedan that was eight years old and on a salvaged Dodge.

The latter made 1500 km but we are very aware that the weakness of its means delayed our time of development. Then there is the future with an engine whose power supply essentially comes from water, from sewage.

For us, anything that a big city rejects that takes a lot of money to get rid of is sensational fuel. A fuel whose calorie value is certainly higher than what we have today. The sewers are dirty, they are expensive. We talk about purification but we always shrink from a problem of big money. We have a proposal: build generators that will drive alternators that will absorb this water to make it very pure for nature; since, on the exhaust, we only come out of the water and water at very high temperature. We could with our exhaust heat tanks or boilers or even generate electricity. It's very simple, I had fun doing a little calculation: what is conveyed in the sewers of Paris in one day would produce the electricity necessary for the life of the capital for three or four days.

Political sentiment aside, the essential oil for the production of energy in the world is a sweet joke. Be careful, don't make me say that another source of energy is capable of generating such monumental profits in its place as simply and so quickly. It does not exist and it is both the drama and the privilege of oil. For us it's not about turning the world upside down, it's none of our business. From our experience we know that in the medium term a car can run on 5% gasoline and 95% water. Let this conviction destroy an entire economic system, I repeat, is no longer our business. "

The upheaval of your invention destroyed a myth, a system. In terms of morality is friendly but economically it can not run huge risks?

“This is nothing new. Any invention destroys something. We know perfectly well that the characteristic of the scientist is to avoid that his discovery succeeds in completely destroying his own civilization. But the oil civilization is a false civilization. It is over fifty years old, it is an easy civilization because it is inexpensive and immediately profitable. She installed laziness and voluntarily avoided the notion of research which clung to the discovery of other sources of energy, and I'm not just talking about water.

The myth of petroleum has installed a real complex, it has built a wall to hide a childish secret because this energy extracted from the bottom of the earth is nothing more than fermentation from water. "...Read more in .pdf

The latter information comes from various sources, the reliability of which is not certain.

In the 70s, when there was talk of reselling the liner France due, among other things, to the excessively high cost of its fuel consumption, Mr Chambrin said he could equip this ship with his invention. For him, sea water was even superior to fresh water in terms of yield. This shows the immense economic interest of this discovery, not to mention that it reduced the country's energy dependence but also pollution!

At start-up, this engine required ordinary fuel (fuel oil or other), then the hydrogen dissociated from water thanks to a separator, called "black box", took over. The water vapor coming out of the exhaust made it possible to supply an individual or collective central heating installation, depending on the power of the engine installed, while driving all kinds of machines. This invention, which required a simple adaptation of car engines, never experienced industrial development, for lack of government authorization which never came ...

From 1974 to 1979 he lived in Brazil where he fitted cars with his engine, which was powered in equal parts with sugar cane alcohol and water.
Mr Chambrin died of a heart attack at the age of 54 in Brazil.

So myth or reality?

3 these articles and reading the patent allow you to form your own opinion.
Excuse us in advance for the poor visual quality of these articles, but their age and numerous photocopies and readings have degraded their appearance ...

Downloading these files is restricted to members ( How to be a member? Click here )

1 comment on “Water injection in engines by Jean-Pierre Chambrin”