Introduction: operation and definition of a gasifier

Gasifier is a process for running any engine with wood or solid fuel containing carbon.

It is based on an incomplete pre-combustion fuel resulting in a gas rich in carbon monoxide CO can be burned in an internal combustion engine.

The main advantage is to be able to use a fuel, which is solid, more easily available than conventional fuels (this is also why it was invented in a period of shortage in liquid hydrocarbons) and, moreover, which can be renewable (wood).

The main drawback comes from its fairly low machine efficiency and less than 15% (a diesel engine has an efficiency that can exceed 40% today) on modern gasification units (we no longer speak of gasifier but of gasification, wood for example). Such a low yield resulted in the consumption of a truck powered by a gasifier consumed about 100kg of wood per 100km.

Nevertheless, the overall efficiency (from “well to wheel”) of wood gasification presents an interesting efficiency in cogeneration. But gasification units are rarely profitable without the use of wood waste (sawmill and joinery residues, scraps, sawdust, bark, etc.)

Control the gasification process is quite complex and requires fairly heavy investments.

But let us return more precisely to the history of the gasifier and its technology.

History of the gasifier for cars and trucks

The first gasifiers saw the light of day at the start of the 1801th century. In 1810, the French LEBON filed a patent for an engine based on the expansion of a mixture of air and ignited gas. In XNUMX, the Spaniard De RIVAZ designed a vehicle with a gas engine.
The men of this century have all seen the steam engines of which the inventor is Denis PAPIN.
In 1839, BISCHOF built a gas generator.

At the same time industrial applications are produced in France and England. In a first furnace, coke is burned incompletely, subsequently, by reduction, is obtained from the fuel gas. 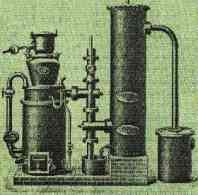 One of 1ere gasification unitIn 1856, the SIEMENS brothers invented gasification. That year, in Paris, trams were operated by gas lighting. Town gas is the oldest known fuel for fueling internal combustion engines.
Read also:  Eubionet 3, European network for the development of energy biomass

In the second half of the nineteenth century, invented the internal combustion engine:
- In 1860, Lenoir presented the first gas engine.
- In 1862, Beau de Rochas, perfected the 4-stroke cycle.
- In 1886, Daimler and Benz made the first 3-wheel car with a 4-stroke engine.
- In 1893, Diesel produced an engine running on heavy oil.

Here is a historical correction from a site visitor:

The first automobile car was Cugnot's dumpster in the 18th century, it was driven by steam, it is exhibited at the Museum of Arts and Crafts in Paris. (…) I do not know the patent numbers but I know that the DELAMARRE-DEBOUTTEVILE patent was filed on February 12, 1884 and that BENZ did not file his on January 12, 1886. DELAMARRE-DEBOUTEVILLE's vehicle was in circulation for the first time in the Rouen region on the Route from Fontaine-le-Bourg to Cailly, a souvenir plaque of this first is affixed to the buildings of the former ROUEN LES ESSARTS racing circuit. In 1984, to celebrate this event, the magazine L'AUTOMOBILE published a book entitled 100 ANS D'AUTOMOBILE FRANÇAISE. All automotive historians agree on the primacy of DELAMMARRE-DEBOUTTEVILLE over BENZ, it is the Nazi propaganda of Hitler's time which tried to make believe that the first car was that of Karl BENZ just as it tried , with some success, moreover, to make believe that the 4-stroke cycle had been imagined by Nikolaus OTTO in 1876, while BAU DE ROCHAS had filed the patent 14 years earlier, in 1862. A lawsuit brought by BAU DE ROCHAS against OTTO, both before the French and German courts, found the latter wrong. It should be noted, however, that even today, in Germany and in a number of countries the 4-stroke cycle is called the OTTO cycle and that it is still claimed that the first car powered by a 4-stroke engine was that of BENZ. More than 60 years later you are the victim of this Nazi propaganda. " 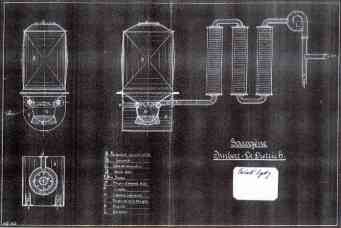 Diagram of a gasifier
It was not until the beginning of the XNUMXth century that we can see concrete results on gas vehicles.

- Around 1900, Riché succeeds, through the gasification of mineral fuels, in producing a lean gas that can truly fuel an internal combustion engine.
- In 1901, Benz built the “Ideal” car with a gas engine.
- In 1901, Parker recommended a poly-fuel gasifier capable of burning both coke and charcoal.
- In 1904, Gaillot and Brunet experimented with a barge whose engine was powered by a gasifier and Cesbron fitted it with an “Alcyon” car.
- In 1905, John Smith traveled the roads of Scotland aboard a gasifier truck.
- In 1907, Garuffo and Clérici each submitted a project for a gasifier with two generators placed symmetrically on either side of the vehicle.
- In 1909, Deutz succeeded in building a gasifier combined with an engine developing 550 HP. 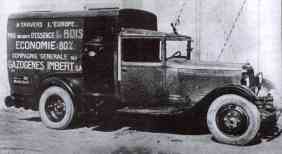 A car driven by a gasifier Imbert
In 1910, Cazès traveled 10 km in the streets of Paris at the wheel of his omnibus running on a charcoal gasifier. From the beginning of the century, faced with the rapid development of the automobile and the fear of running out of petroleum, manufacturers researched to create vehicles running on fuel produced on national soil.

We first think of using alcohol, which is produced in excess in Languedoc, and that obtained from sugar beet.

Acetylene is also used in some cases. In others, mothballs, methane or ethylene. 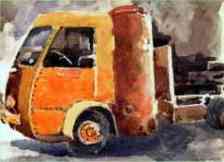 Gasifier truck, extract from an artist's painting
The problem in the development of gasifiers, is the storage for transport of gaseous fuels. 1914 1918 the war to stop the search.

In 1919, the first service stations appeared. In Diemeringen, in 1920, Georges Imbert began to develop the wood gasifier. In 1921, sixty vehicles equipped with a gasifier circulated in England.

France fell behind in basic research, which is why in 1922 a competition for gasifiers was organized. A few years later, our country will be at the forefront of techniques in the construction of gasifiers, and this thanks in large part to the inventor of Sarre-Union, Georges Imbert. 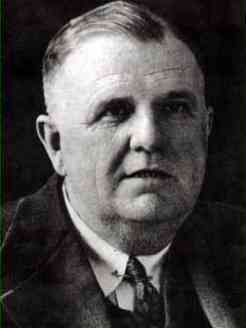 In the IMBERT installation, the engine vacuum draws in the necessary quantity of gas and gives rise to the air intake essential for the operation of the gasifier.
The air is distributed by the nozzles around the hearth where the charcoal is placed and on top, there is the wood. 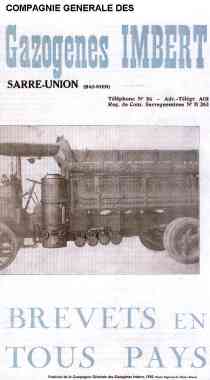 Notice of Imbert gasifier of Sarre-Union
Ignited charcoal gasifies and produces by combining with air, CO (combustible) and CO2 (non-combustible). The latter is then reduced during its passage over the incandescent coal and transformed into CO. All the other components (tar, vapors, etc.) are transformed into fuel. 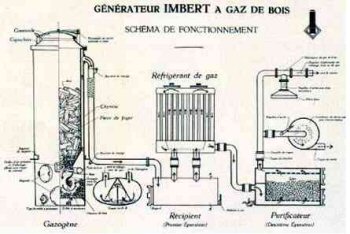 operating diagram of a gasifier
The "wood gas" thus obtained is freed from its water vapor and dust, cooled and purified to come out in perfect condition of use.

Conclusion; abandonment of the gasifier after the war

In 1950, Georges Imbert died disinterested in everything, like many inventors in the field of energy.

It is the beginning of the end for his invention, abandoned for an abundant and cheap oil. We will have to wait for the oil crises to bring up to date the principle of the gasifier, now called “wood gasifier”.

The depletion of fossil fuels and the environmental problems associated with their combustion nevertheless seem to promise gasifiers with a bright future in heat and electricity cogeneration. 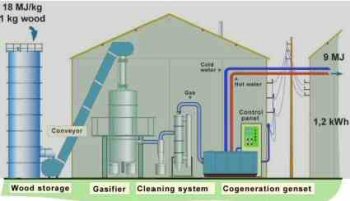 6 comments on “The gasifier”