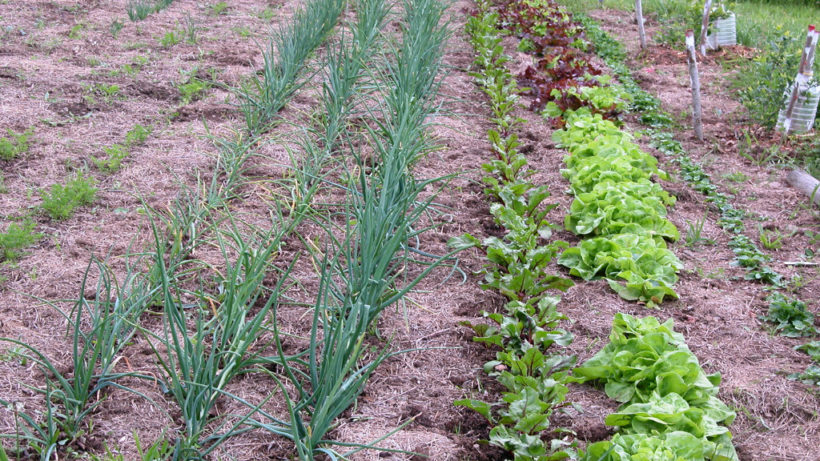 Le kitchen garden lazy by Didier Helmstetter. How to garden effortlessly with hay, a “4 in 1” super-material

Photos: Didier Helmstetter. Introductory photo: vegetables grown in soil that has never been worked - no spade, no pickaxe, no hoe, no grelinette ... And of course, without using a tiller!

The use of hay, instead of other materials (straw, compost, bark, dead leaves, etc.), is the key to the system. It plays 4 essential roles, which allows the gardener to laze around. First, like any opaque cover (if the thickness is sufficient), it blocks annual weeds, which no longer germinate. No need to hoe or draw. Then, it maintains an intense biological life in the soil, in particular with earthworms (particularly those of the group of "anecic worms", which dig vertical galleries). They will be numerous and very active because they are well fed. In reality, it is a whole armada of organisms which set to work to "work" and build the soil. This activity results in the secretion of glus. It sets in motion a process of “deterioration” of the soil (the opposite of “degradation”). So naturally, without any work, this leads, in a few months, to a soil “which looks like couscous”. No need to dig or pass the grelinette. “And above all, do not use a rototiller, which massacres the worms by shredding them! "

In addition, the cover provides protection for the soil and its organisms against attack: the “lumps” (aggregates) that form are not degraded by the impact of raindrops; even under violent thunderstorms, and despite the slope, it has no trace of erosion, no fine particles washed away; fertility remains. Protected from the wind and the sun, the soil is kept moist, which promotes the activity of organisms and the growth of plants. No need to weed to keep the soil loose and airy.

Read also:  Extension of the authorization of Roundup (Glyphosate) for 5 years in Europe ... We say thank you who?

Finally, the decomposition of the hay provides the soil, and thus the plants, with all the nutrients essential for their growth. And not just the few “major” elements (the famous NPKs) that we add with the fertilizers. These elements were taken from the meadow, during the growth of the grass, which absorbed everything a plant needs. Hay is therefore also a "very complete organic fertilizer", slow release since it must first be broken down, which is done naturally according to the rate of plant growth (the soil organisms that take care of this follow. also the rhythm of the seasons). No need to fertilize! Even the manure, "which is only what remains of the hay when it has passed through the digestive tract of the animals, which have taken their nutrients there, mixed with straw, even poorer", is of no interest!

These, in a nutshell, are the “natural springs” on which this approach is based… And that explains why the results are so spectacular.

It should be noted that the straw (except when using "organic" straw) contains residues of the various treatments undergone by the cereal, including fungicides often sprayed only a few weeks before harvest, shorteners, herbicides, while the hay from natural meadows has generally not been treated. “All the more reason to favor hay instead of straw! "...

Bonus: Didier video that presents the Sillon'net, small tool of its conception (with the help of members of forums of the Econology website) To cut hay on the ground

Last surprise: "It should also be noted that this way of doing things works much better and faster by installing your vegetable garden in a meadow or a lawn or even a wasteland". In a "classic" garden, the soil will have been clubbed and partly poisoned, the population of anecic worms will be low or even non-existent in the event of intensive use of the rototiller, mineral fertilizers and certain pesticides, even "organic" (copper , commonly used in "organic", is a poison for the soil, worms, fungi, mycorrhizae; it binds to it). In the case of such a soil, it will sometimes be necessary to persevere for half a dozen years before the natural mechanisms take over! In a meadow, 6 months or 1 year will be enough for everything to be “top”!

Monitoring work on the garden of Didier H. from 2014

Introduction to the Kitchen Garden Sloth

51 comments on “Le Potager du Paresseux by Didier Helmstetter (Did67), an effortless vegetable garden with hay”