I found a few free hours to advance on my two-seater mountain bike on an electric Viper FS 3.0 base.

This is a used 2006 model ATV at a good price (the price of the new rear shock absorber! 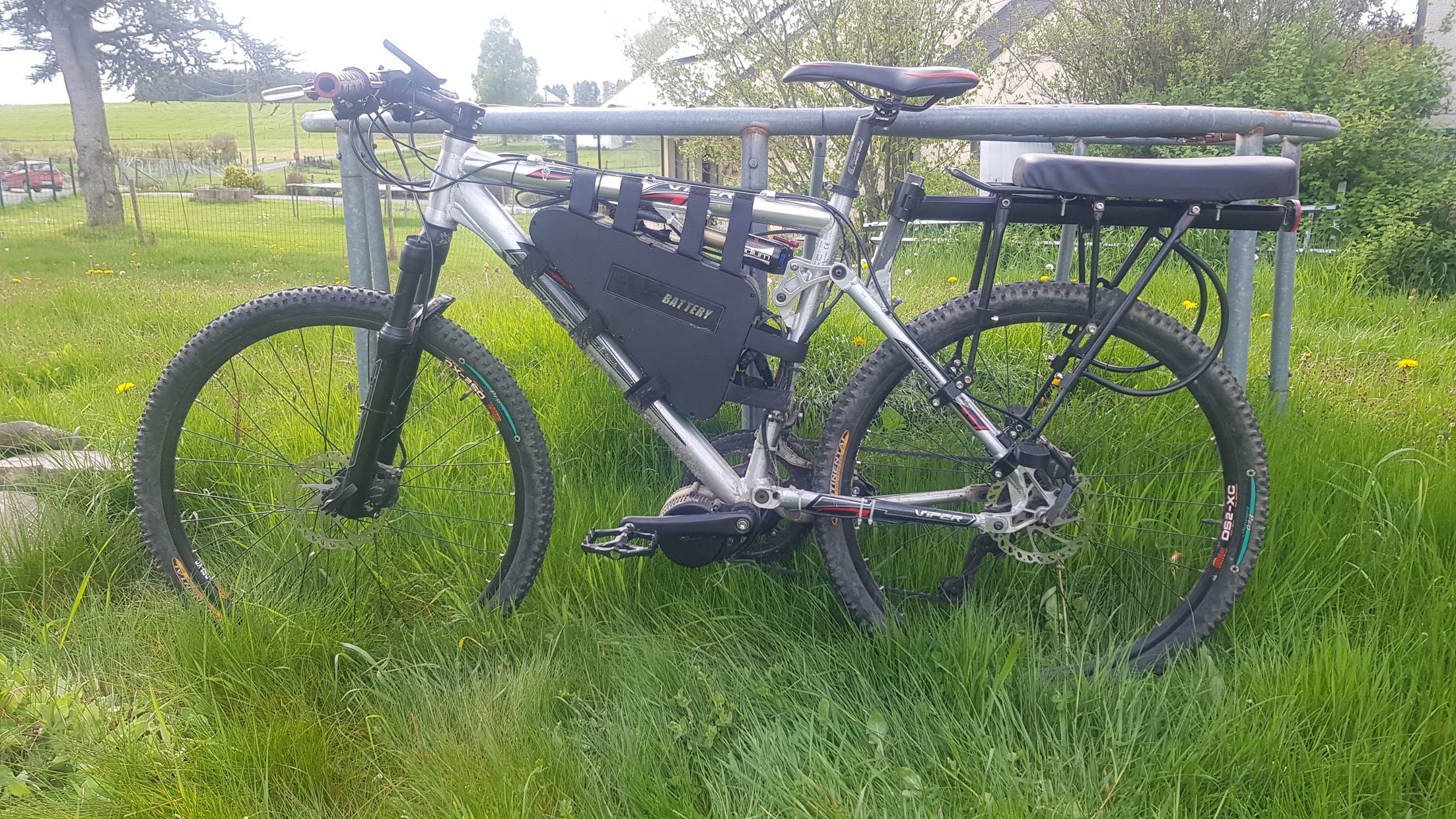 Finding a rear suspension MTB luggage rack is already complicated because the models are rare but the few existing models on the market do not withstand more than 10 or 15 kg ...There is therefore nothing on the market strong enough for an AR suspended mountain bike to transport a child weighing over 15 kg (and with the safety step certainly no more than 10 kg!)

The viper FR 3.0 is a 7005 aluminum frame (US standard apparently: 7020 here): I am not equipped to weld aluminum and anyway from what I have just read the 7005 welds rather badly! So impossible to weld here unlike my Rockrider in good steel that I was able to weld and resolder (and not just a little) in all corners! See electric-transport / reinforce-the-fork-of-a-rockrider-6-0-convert-to-electric-and-discs-t16170.html

I adapted a static luggage rack given for a resistance of 140 kg on Amazon (so 60-70 kg in real life I presume) via the following modification in photos. 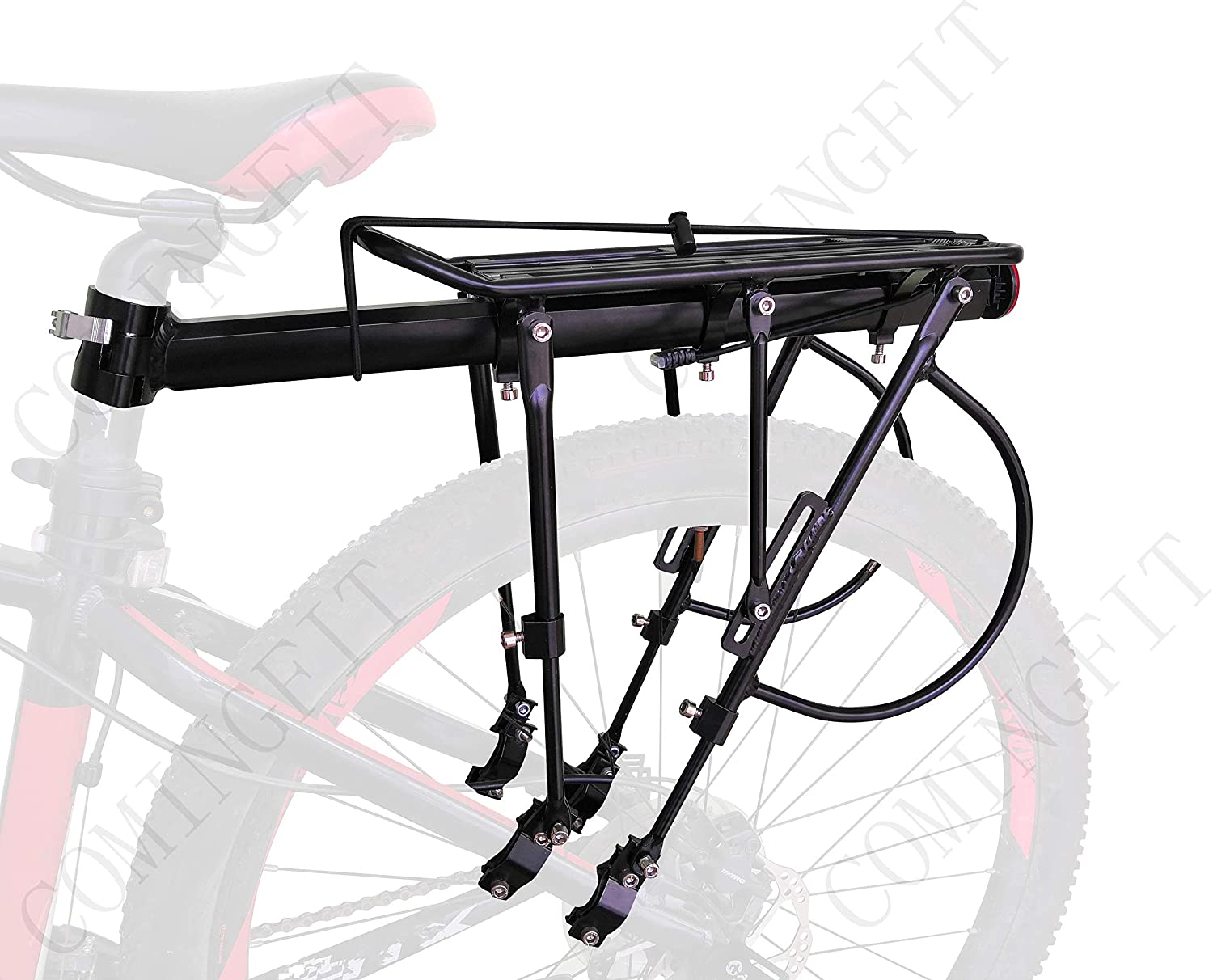 As this luggage rack (like all slightly beefy luggage racks) attaches to the seat post ... well, I mounted a second one on the swingarm. So much for the principle.

I went on a square tube for strength and pivot reasons. It is a profile of 25 * 20 therefore with a good thickness. 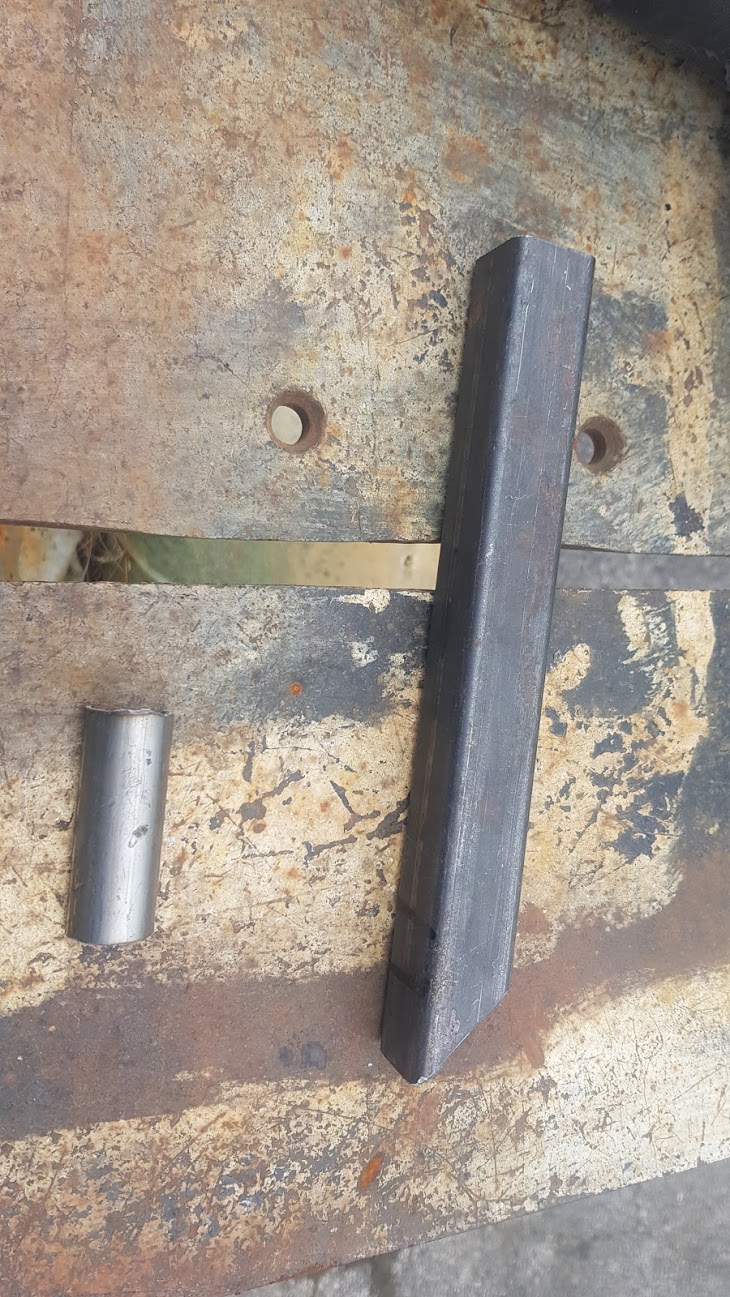 Pointing and checking of dimensions: 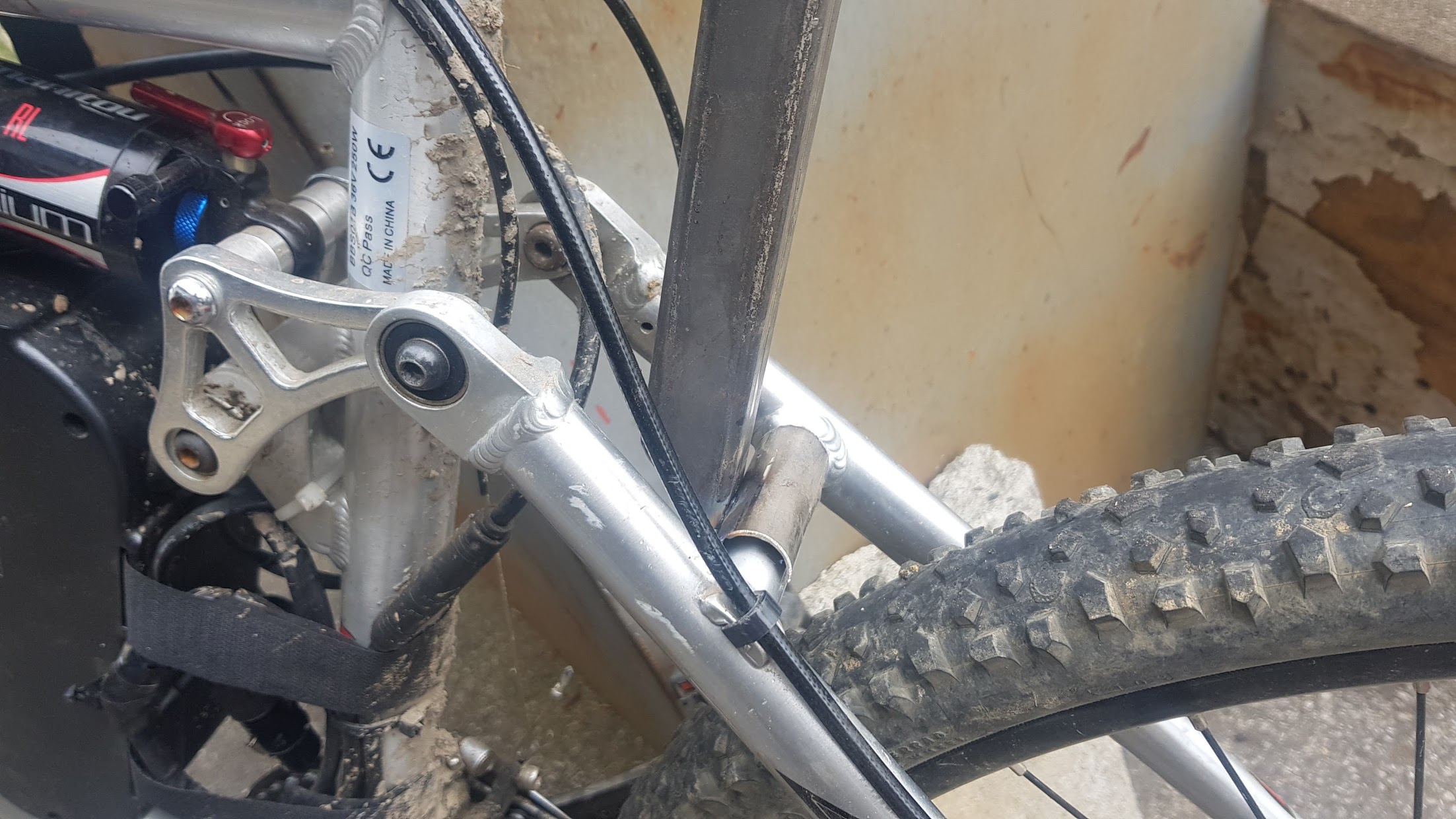 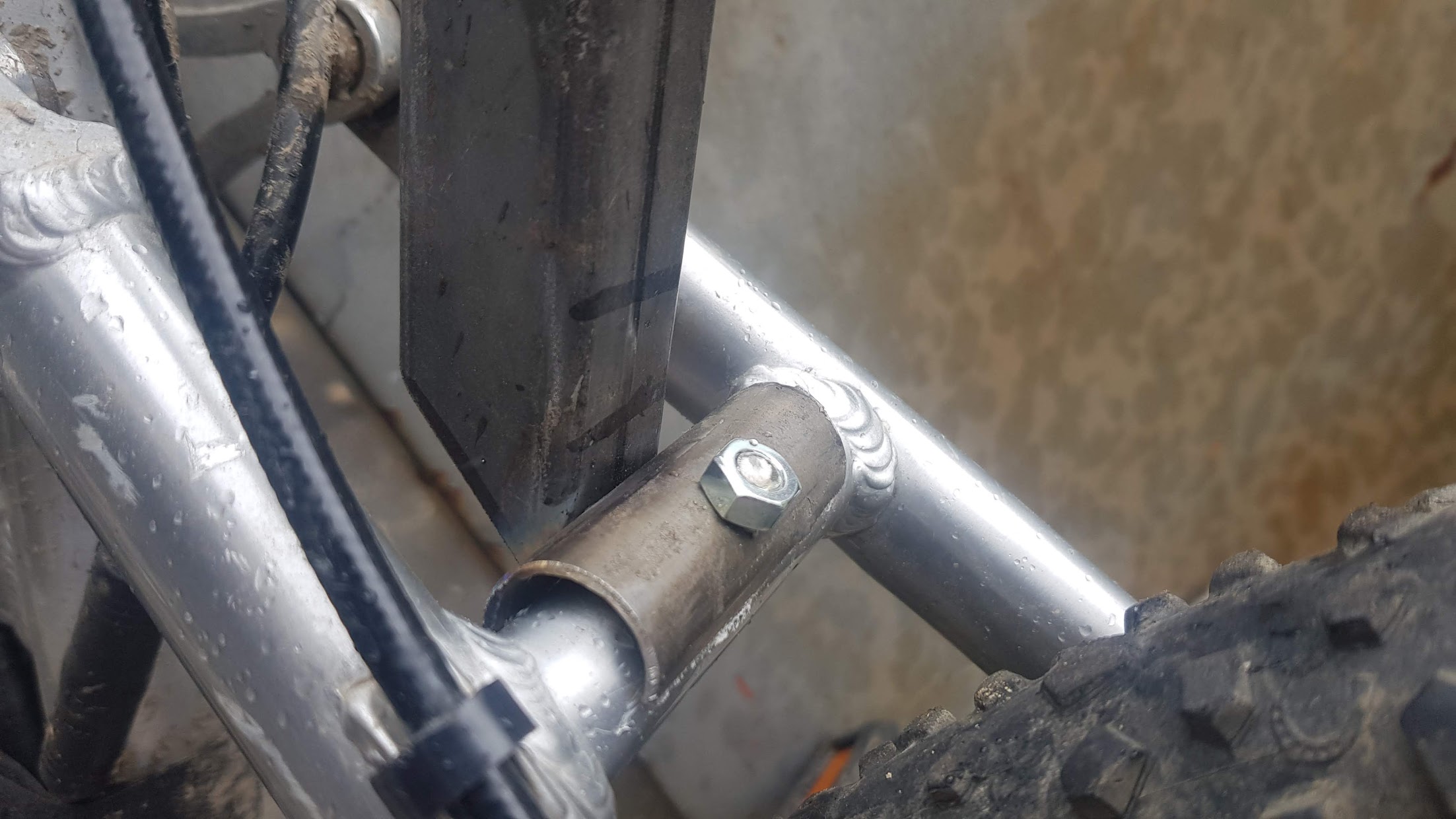 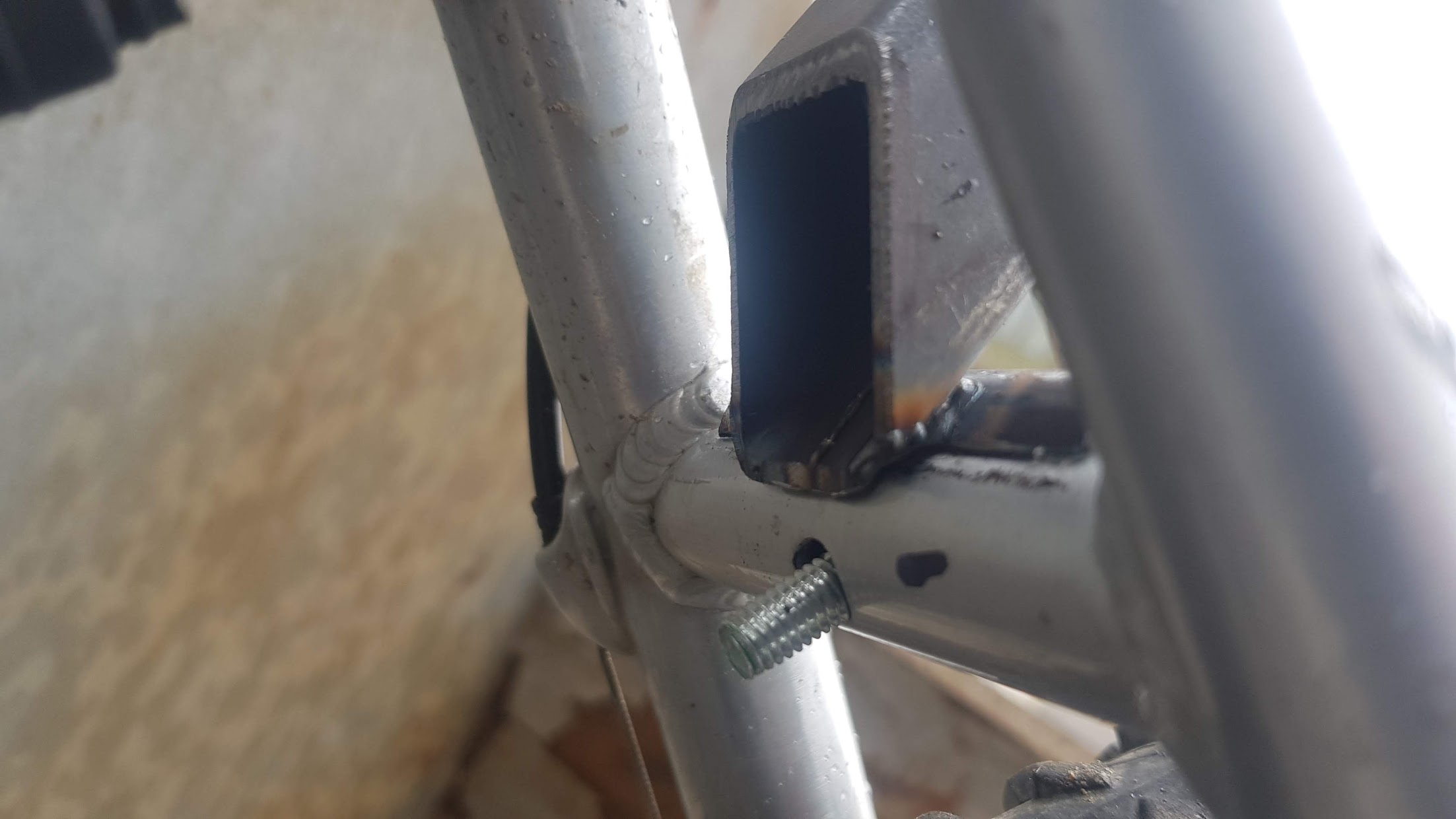 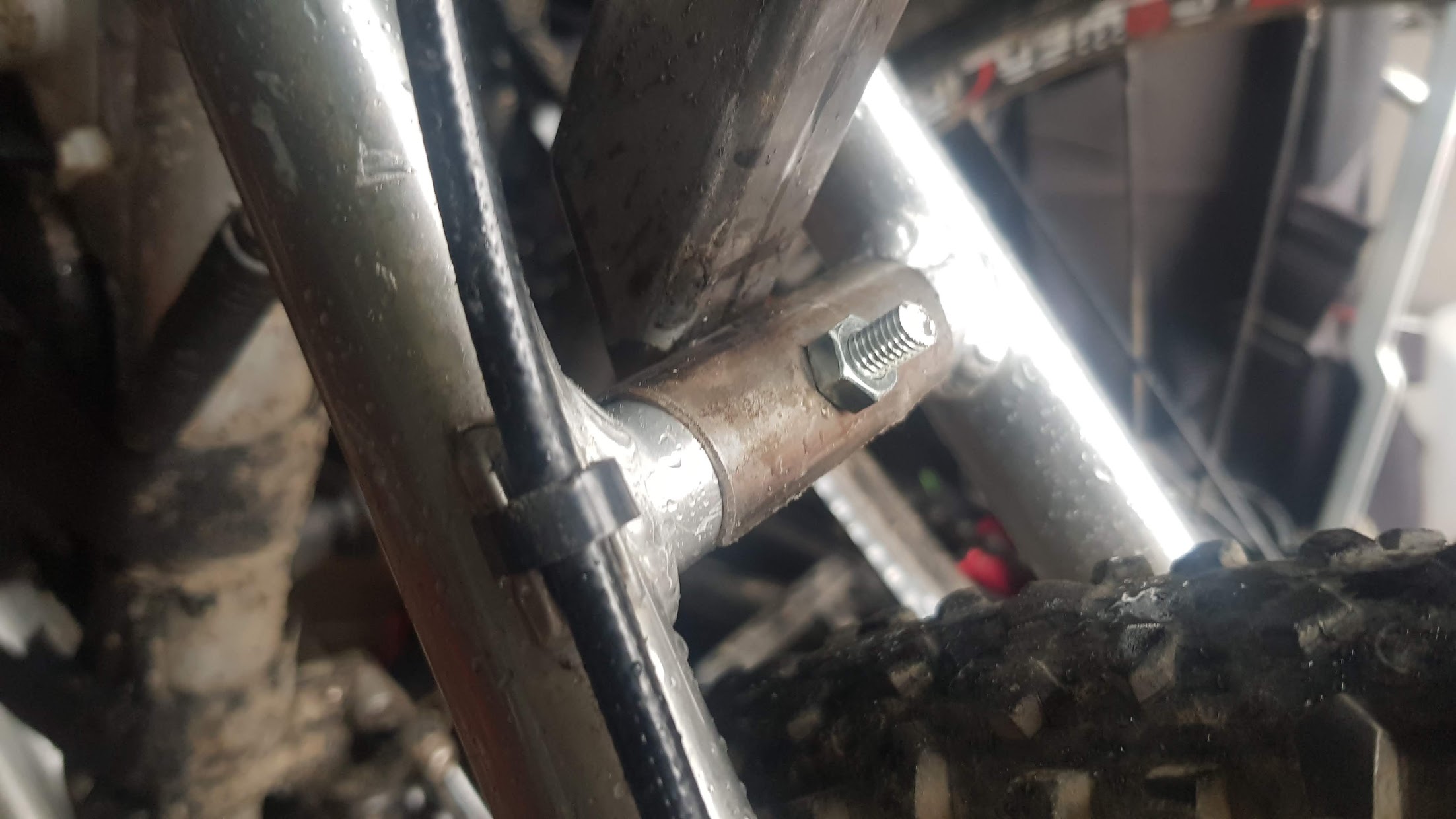 Pointing of the reinforcement triangle: 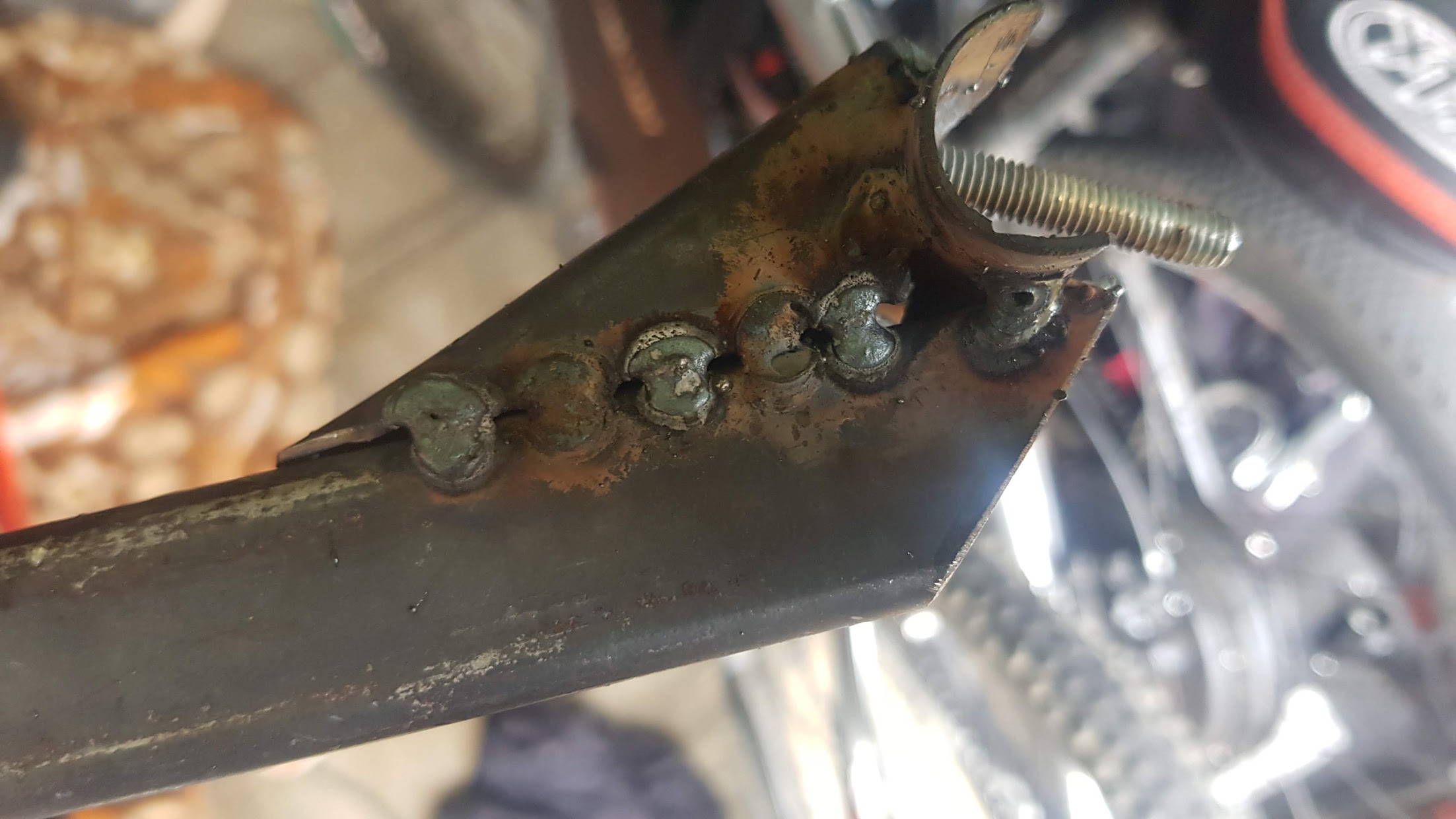 The 6mm bolt was too light, I switch to 8mm: 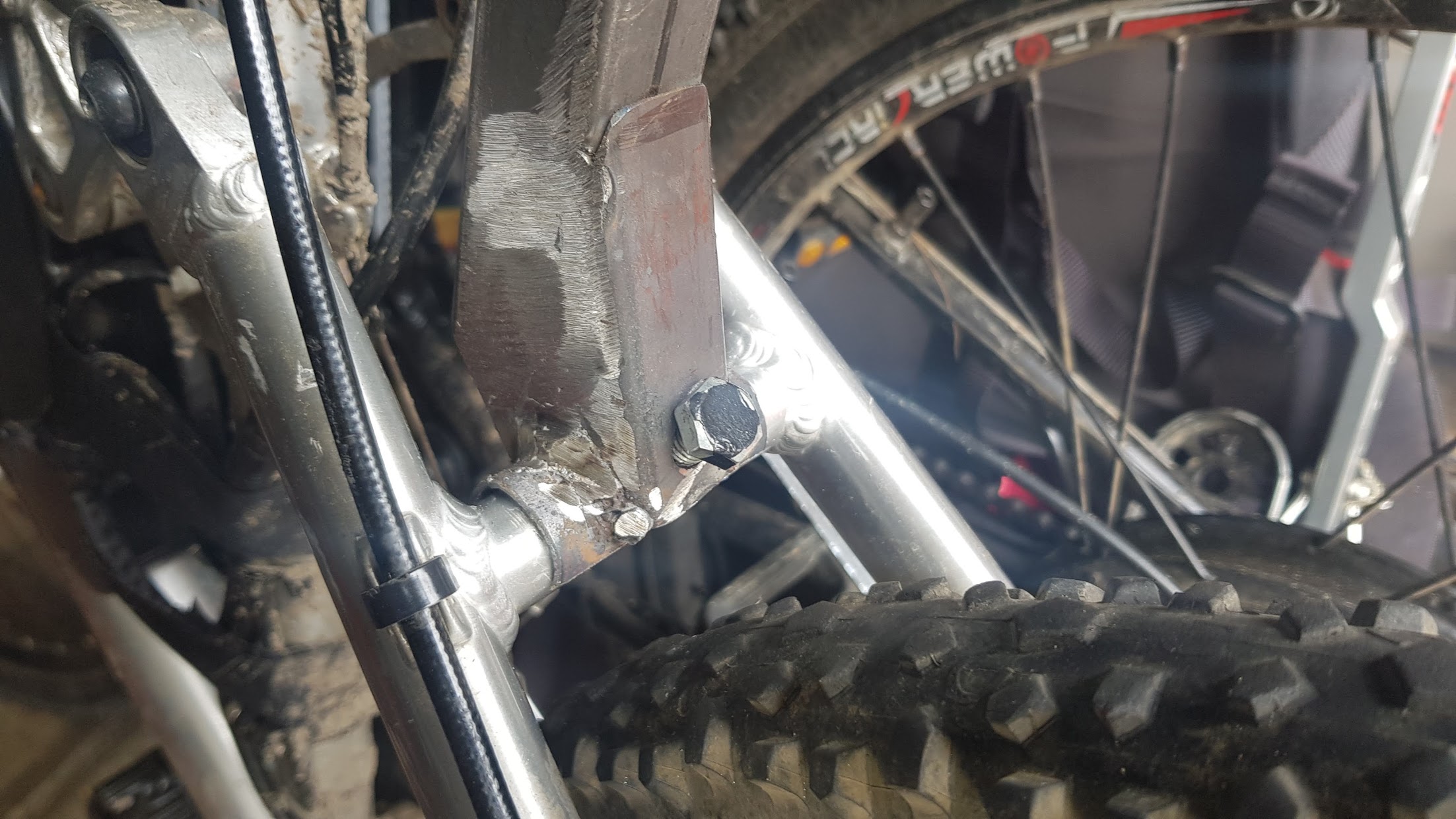 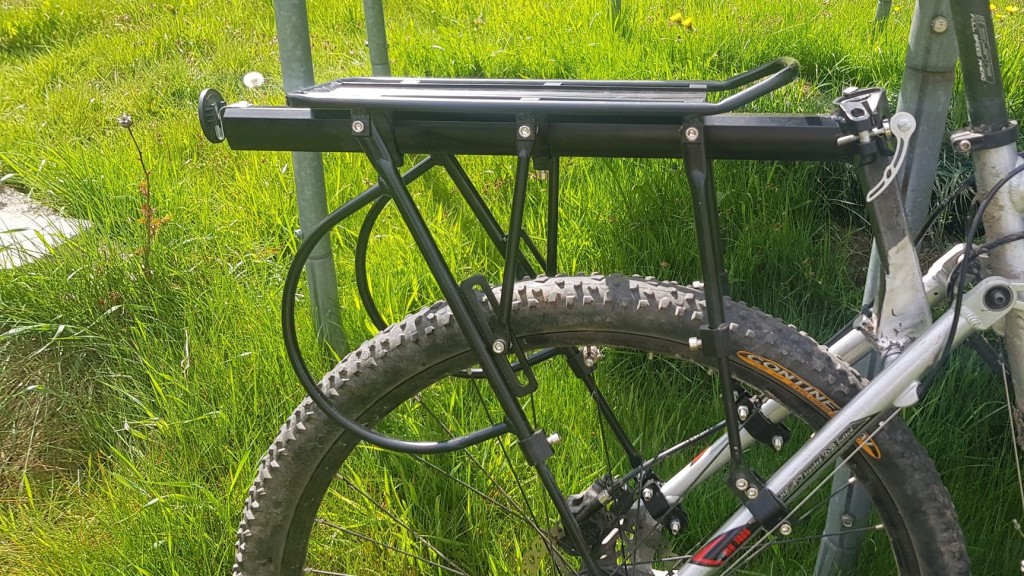 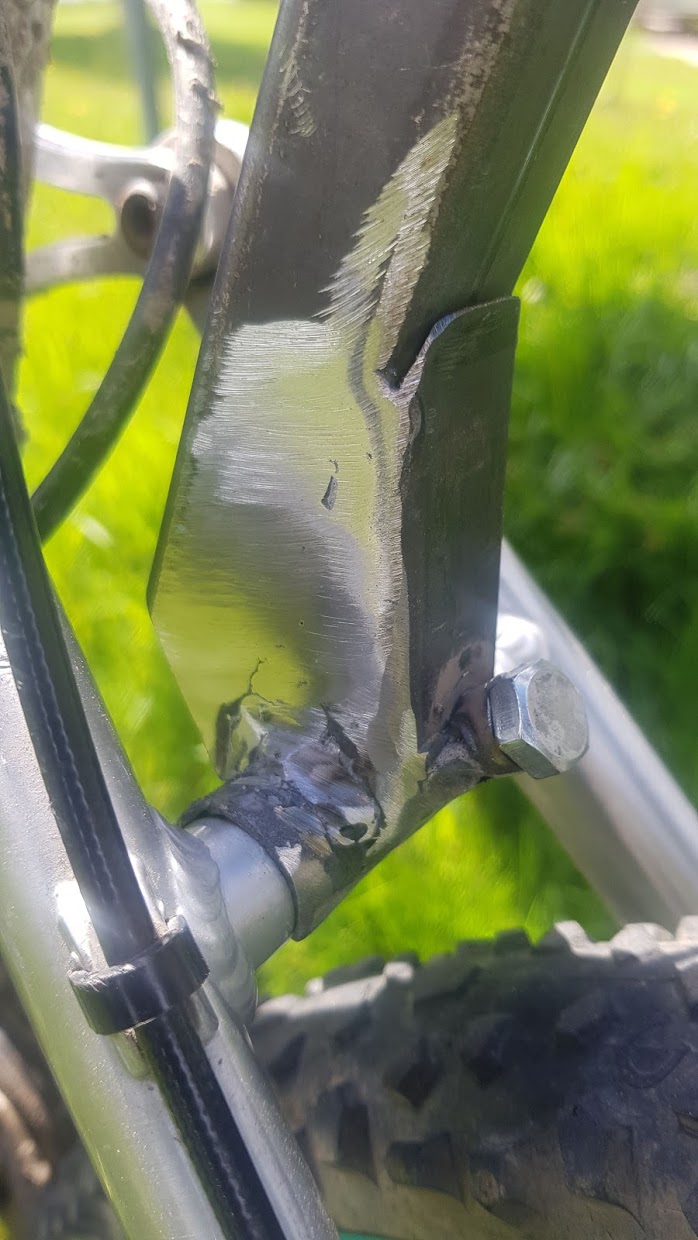 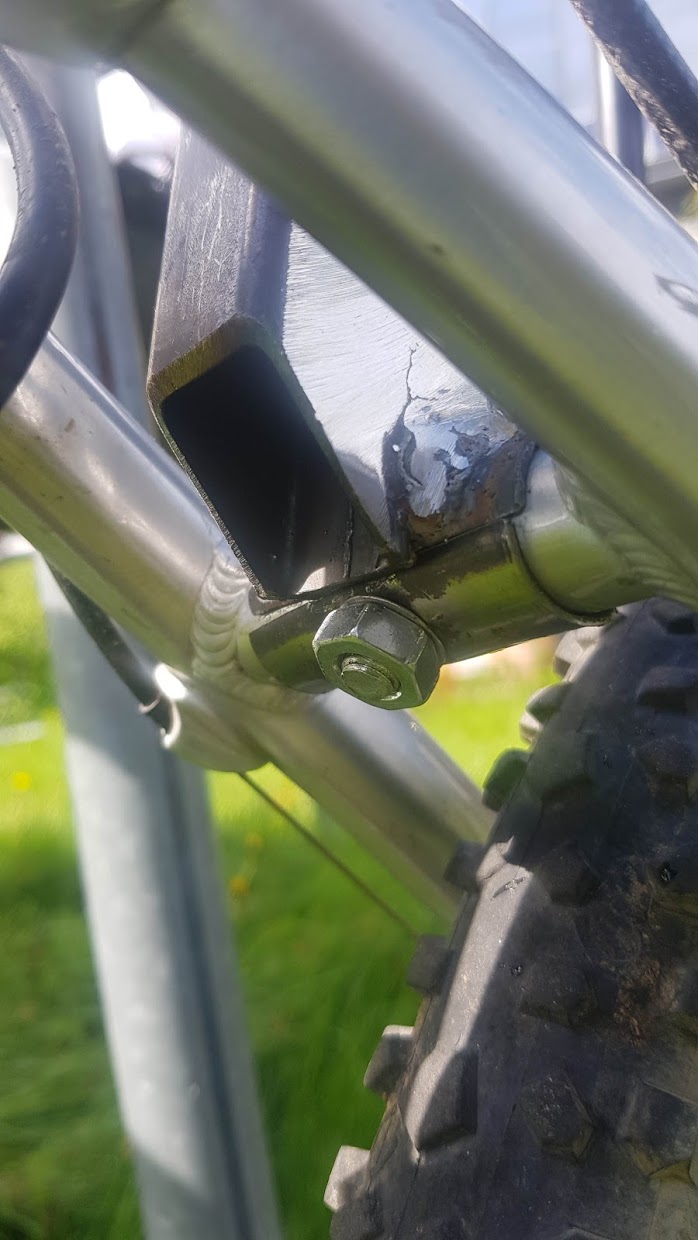 The small 3D printed cap (there is one for the bottom too): 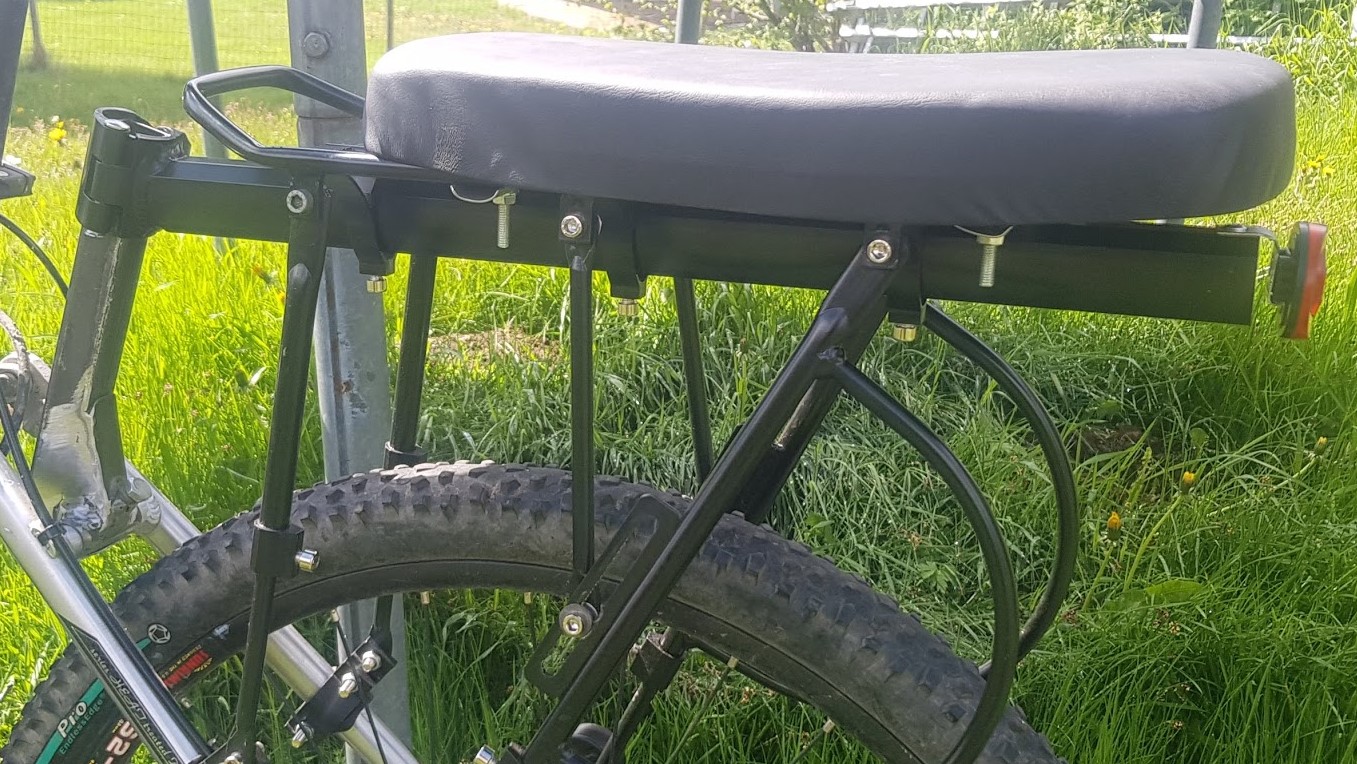 My only fear is at the level of the resistance of the aluminum frame since where I set myself it is not at all a part which must undergo such an effort. I compensated by bolting "cylinder on cylinder" ... to see.

I also have a fear about the 4 aluminum tubes of the height adjustment luggage rack which are tightened with 1 single point of compression (steel on aluminum) ...

I would probably make a video for lazy people who don't want to read a forum after a few weeks of use ... if nothing has broken by then (and even if it has broken!)!
2 x
Do a image search or a text search - Netiquette of forum - Support him forum and his ideas, make Useful shopping ! - My new project: a twin-engine electric paramotor
Top

Christophe..You will have to go to a better welding process for this kind of work ... Certainly it does the job ... But with TIG welded parts you could make finer, more beautiful and just as strong. ..

And why two-seater? Is it that Minichristophe is not able to pedal himself?
0 x
The only thing safe in the future. It is that there may chance that it conforms to our expectations ...
Top

What is not beautiful? It's too big ? Do you want a slap?

I would apply a coat of paint and do some finishing or reinforcement if necessary after a few weeks of testing to validate the tests under load.

I have already thought of TIG but it costs an arm ... in gas (obviously all have gone to monthly subscription!)! I don't weld enough to make it interesting. Maybe one day I will equip myself when there will be no gas TIG ... like the cored wire. I don't know why it doesn't exist yet?

Because the flux-cored wire suits me very well: I weld 1 mm with it (the bolting tube is 1 mm)

This piece must weigh around 300 gr ... not enough to make a cheese out of it.

It's my emergency bike to bring MiniChris to school (14 km round trip) and take a few walks in the woods in "eco-friendly motocross" mode ... I haven't yet mounted his own electric bike. (I'm thinking about it) !

0 x
Do a image search or a text search - Netiquette of forum - Support him forum and his ideas, make Useful shopping ! - My new project: a twin-engine electric paramotor
Top 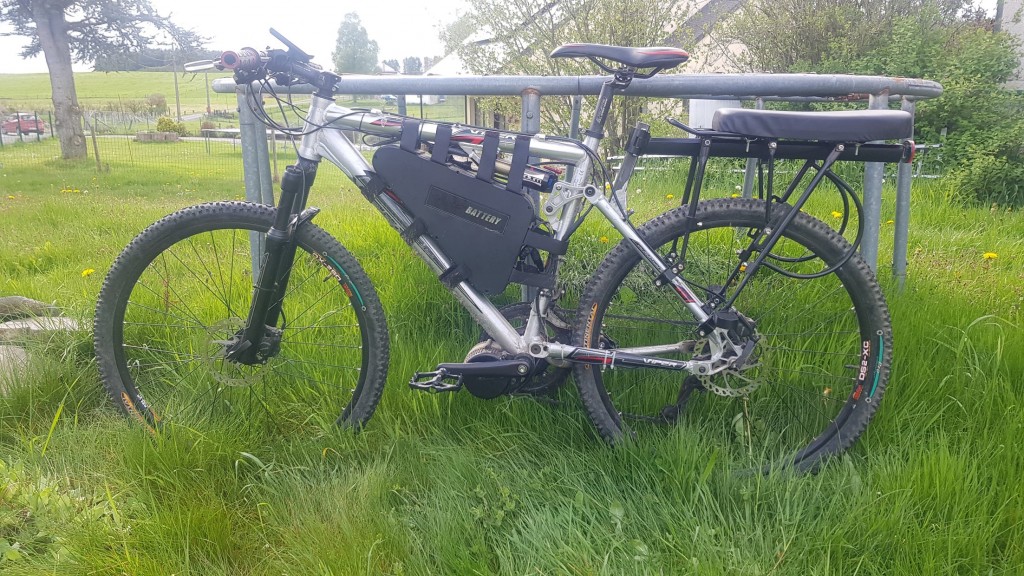 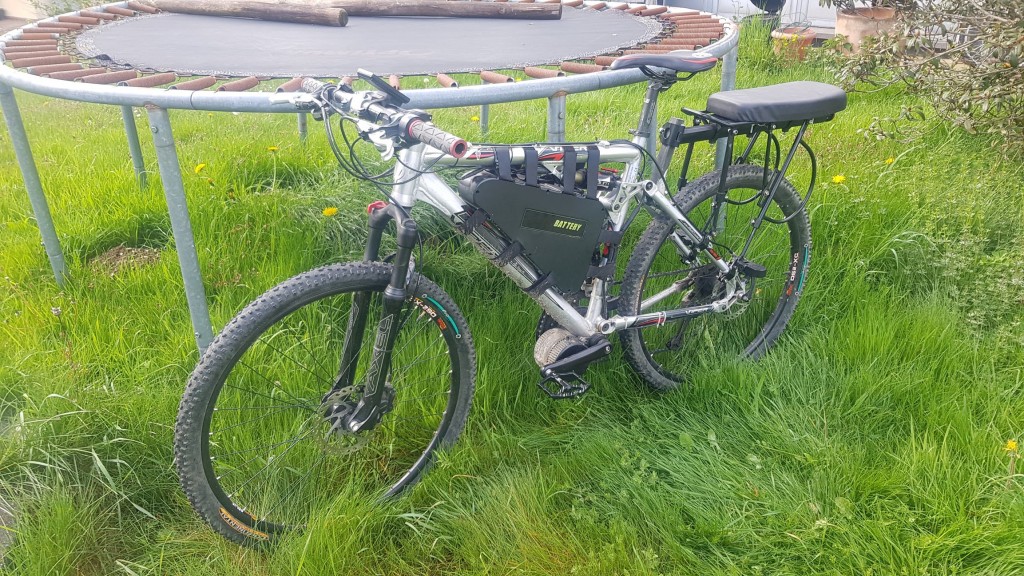 Videos soon ...
0 x
Do a image search or a text search - Netiquette of forum - Support him forum and his ideas, make Useful shopping ! - My new project: a twin-engine electric paramotor
Top

Yes you have interest !!!

Because if this mountain bike exists it's a bit of your fault considering how you said that my rockrider 6.0 decathlon was daube (and it was justified but only before my modifications madmaxtestques

)!
0 x
Do a image search or a text search - Netiquette of forum - Support him forum and his ideas, make Useful shopping ! - My new project: a twin-engine electric paramotor
Top

You are right
0 x
Do a image search or a text search - Netiquette of forum - Support him forum and his ideas, make Useful shopping ! - My new project: a twin-engine electric paramotor
Top

Bah what, will there be someone on the bike or will he be radio guided ???

Maybe your sister will be there?

0 x
Do a image search or a text search - Netiquette of forum - Support him forum and his ideas, make Useful shopping ! - My new project: a twin-engine electric paramotor
Top
New topic Reply
20 messages