Christophe wrote:But 6 weeks ... Damn it's long when you're at war!

You're right, the Chinese and the Koreans did not wait and applied the results of a single clinical study to act (2 now with that of Dr. Raoult) and it gave results, perhaps more by screening systematic, we will know afterwards.
I guess this visionary "paper" has already been cited here http://jdmichel.blog.tdg.ch/archive/202 ... 05096.html
0 x
Top

I had not seen it cited elsewhere anyway, thank you
0 x
"Enter only with your heart, bring nothing from the world.
And don't tell what people say "
Edmond Rostand
Top

So I just received a CHECKNEWS ALERT after sharing this video on Facebook!

It's cool, it's the first time I have received this kind of thing: 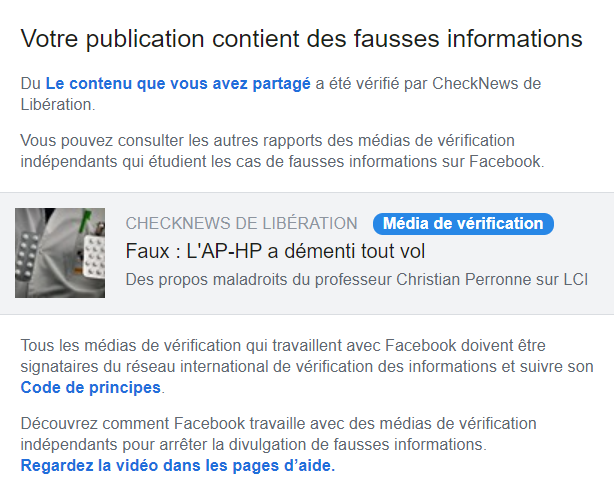 Again, note the excellent WORK OF JOURNALISTS: Professor PERRONNE NEVER TALKED ABOUT THEFT, any more than AP-HP. PR PERREONNE simply said MISSING and the STOCK IS EMPTY! That's all!

It is the youtube video which indicates the term VOL but like the journalists they are too strong bin they all mixed mentally!

Clumsy remarks by Professor Christian Perronne on LCI suggested that the central pharmacy of Paris hospitals had been the victim of a pillaging of drugs that could be used to fight against the coronavirus. The AP-HP denied any theft.

Many of you asked us about the comments made on Friday March 20, 2020, on LCI by Professor Christian Perronne, who heads the infectious diseases department of the Raymond-Poincaré University Hospital (AP-HP) in Garches. In an extract very shared on social networks, we can hear Christian Perronne report about chloroquine, an antimalarial drug which presents first positive results to treat Covid-19: “It is the only drug available today for the sick. Unfortunately the central hospital pharmacy announced today that it was completely out of stock. That the stocks had been looted. It's a shame. The cabinets have been robbed. These are the emails we received today. ” The journalist asked her where the drugs were stolen. He answers: "I don't know, in the different stocks of hospital pharmacies." (sorry???)

Joined by CheckNews, Professor Christian Perronne recognizes a form of awkwardness in his remarks made on LCI. Contrary to what many viewers may have understood, the doctor meant that the stocks of chloroquine are currently empty and not that they have been robbed. The doctor sent us the email he received Friday afternoon, which reports the absence of these drugs in the stocks of the central pharmacy of Paris hospitals.

A pharmacist from the General Agency for Health Equipment and Products answered a pharmacist from Garches hospital who asked her to deliver Plaquenil (a drug containing hydroxychloroquine): "Since this morning we have ordered to manage in shortage this product before the explosion of orders barely received stock. We are therefore awaiting instructions in order to distribute the stock between the different establishments. This decision to follow the lack of "good citizenship" of certain establishments which have clearly given instructions to their interns on duty to "empty our stocks" during the guards. We therefore deplore the lack of solidarity between establishments and this only increases our workload… ” This message therefore makes it possible to realize that certain Parisian hospitals no longer had Plaquenil, not because stocks have been robbed, but because other establishments have taken too much.

Following this shortage of chloroquine, the AP-HP tells CheckNews that new distribution rules are in place: “From this Sunday, these drugs continue to be delivered to patients who usually take it as part of chronic pathologies. Within the framework of Covid-19, they will be delivered only within the framework of supervised therapeutic trials and intended to test its effectiveness. ”

Not so fake news as that then !! Bravo Mr PERRONNE for denouncing these practices!
0 x
Do a image search or an text search - Netiquette of forum - Support the forum doing Useful shopping
Top

Our Brazilian friends (my wife worked there for 3 years) received a box of chloroquine donated by the government.

Distribution seems to be done state by state.
They started with Belo Horizonte

In their message it was said that each Brazilian would receive his box.

But also, which seems curious to me that we could take preventive ... 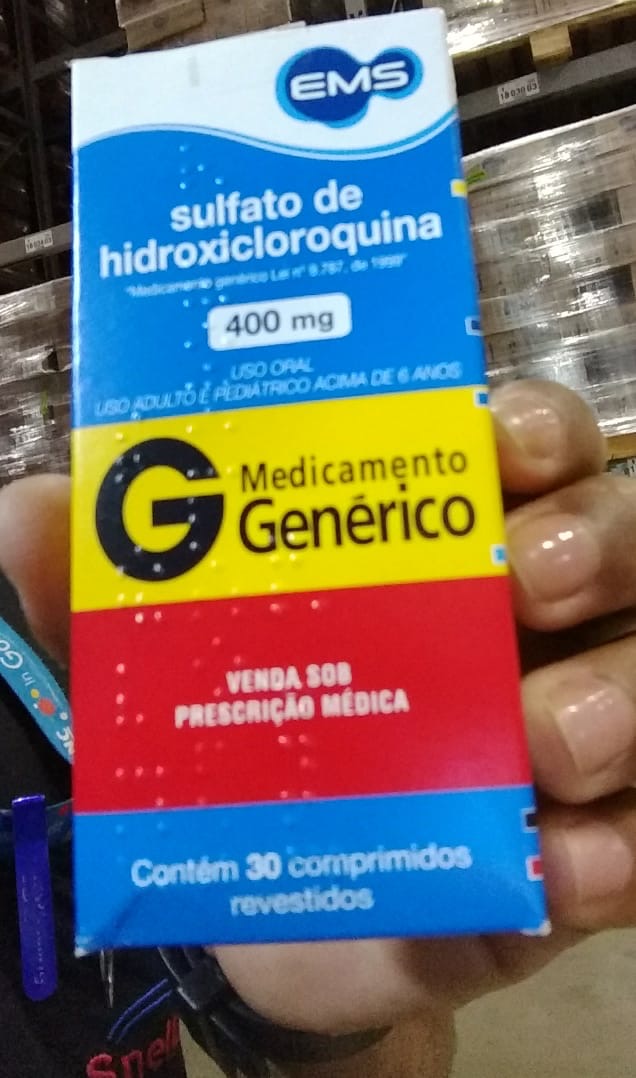 the box of chloroquine received by our Brazilian friends.JPG (116.9 KB) Viewed 3639 times

The point this morning by my brother-in-law (Doctor in Chembiology at the CNRS of Strasbourg ... for those who have not followed everything):

About the very low mortality in Germany

The difference between death rates and between Germany and the rest of the world is well explained by the level of screening, but that does not explain everything. South Korea, which does a general test on the whole population, falls to 1,15% of mortality rate. The rest of the difference with Germany can be explained by the efficiency of the respective healthcare systems. We are missing important data: the age as well as the chronic pathologies of hospital patients alive and deceased.

A point of reflection. The Chinese have developed an AI capable of making medical diagnoses and predictions of pathological attacks, they could experience this AI in the face of the situation. Why is it not done? Ethical issues, lobbies, equals, conspiracies, politics, geopolitics?

On the February 4 publication of Nature: https://www.econologie.com/coronavirus- ... rier-2020/

I finalize my comment: it's a letter to the editor, so there is no specialist scientist review process. The editorial board decides. This article in the state would not be accepted for publication by peers.

Data must be presented, mean + - standard error of mean, number is not given, EC50 is not reliable, nor is the therapeutic index. It's a trend. Then on the histogram we classically do a statistical test to show that the differences are stat. (It should be a star, and since the histogram has error bars the manipulations have been done several times (but how many?), It is not indicated).
The histogram data sticks with the mode of action of the molecules.

Data on clinical trials is available to everyone on https://clinicaltrials.gov/

A clinical trial is used to assess the effect of a therapeutic molecule, among other things, against a placebo. If the difference is not significant, there is no therapeutic benefit and therefore the drug will not be prescribed for this therapeutic indication. To be in stat conditions you need a large workforce. So for a cohort of 24 we are far from the mark. But that testifies to the dramatic state of French research, it is impossible for us to mobilize a lot of money as we want, the labs do not have millions of euros available. (We are not banks, if a team shuts down that worries who?) We do with what we have and the money given to the public labs must be used for what it was asked for. It is the guarantee that we do not do anything with the money of the taxpayer who finances 65% of public R&D activity (for the curious, the remaining 35% are generated by own income, patents, services ...).

Chloroquine was approved as an antimalarial treatment in 1947, at that time we made fun of knowing the mode of action. But this is no longer the case in 2020.

So if we understand my brother-in-law well, Dr. Raoult also took a financial risk! Either he self-financed tonight he did not respect the official protocol (but that we already suspected ...)
0 x
Do a image search or an text search - Netiquette of forum - Support the forum doing Useful shopping
Top

Adrien (ex-nico239) wrote:Our Brazilian friends (my wife worked there for 3 years) received a box of chloroquine donated by the government.

Distribution seems to be done state by state.
They started with Belo Horizonte

Very good information thank you, there is no need for a clinical trial which will make us lose at least 6 weeks !!

And even less "we received orders to create the shortage" ... I can't believe the rate of tocards in France ... 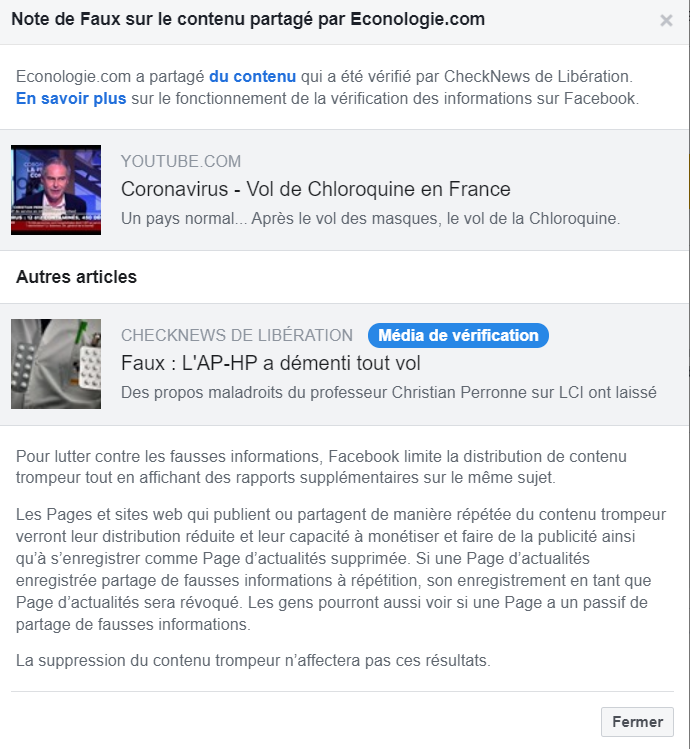 I wonder if "facebook has not received an order " to make these denials! Because it is really the first time that I receive one!

We'll see if your info is censored too ...

Christophe wrote:So if we understand my brother-in-law well, Dr. Raoult also took a financial risk! Either he self-financed tonight he did not respect the official protocol (but that we already suspected ...)

I do not think so. Firstly because he is really in the field of competence of his laboratory, then because for what I know, in public research funding there is indeed a part strictly allocated to approved, budgeted projects. .., but a (small) hand in the lab to do what it thinks right to move forward on this or that subject.
0 x
Top

sicetaitsimple wrote:..., but a (small) hand leaves the lab to do what it thinks right to move forward on this or that subject.

Okay!
0 x
Do a image search or an text search - Netiquette of forum - Support the forum doing Useful shopping
Top

Christophe wrote:So if we understand my brother-in-law well, Dr. Raoult also took a financial risk! Either he self-financed tonight he did not respect the official protocol (but that we already suspected ...)

What I understand is that your brother-in-law would have liked Dr Raoult to have more resources, to test more people (24, it's really a small sample).

Dr. Peronne's words were really very clumsy. I think everyone understood that there had been theft (the word theft, used by the journalist, had not been denied). In this case, there was only a movement of stock from the central pharmacy to the hospital pharmacies. There is nothing to make a dish of it. The problem is the lack of stocks; but the manufacturers are in action.

In short, this confirms to me in my idea that by being so suspicious of chloroquine, the government mainly wants to give itself time to rebuild sufficient stocks (and by taking the opportunity to do additional tests).

Next, the question that arises is chloroquine for all patients, or only for severe cases? For my part, I think it is better to reserve it for serious cases (except to pass to the systematic test).

Finally, even if it is effective, chloroquine will not necessarily treat everyone, it will be difficult to treat elderly patients and weakened by different pathologies.
0 x
Top
New topic Reply
1097 messages

Back to "Health and Prevention. Pollution, causes and effects of environmental risks "