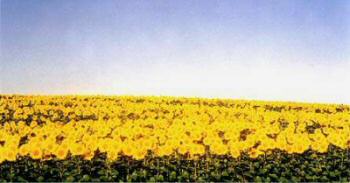 Contrary to what the defenders of the Diester subsidiary claim (econologically negative: more energy is spent, generally in the form of oil, to "manufacture" it than the energy it contains), diesel engines (with a few small modifications). ) are capable of burning raw vegetable oil (first pressing)

“The automobile which runs on oil, it is as old as the world of Rudolf DIESEL, the inventor, who designed and checked the proper functioning of his vegetable oil engine, in 1892, 110 years ago .

110 years of drilling, wars, money, blood, kilometers traveled, cancer, exhaust fumes, oil spills, liters sucked from the depths of the earth, digging huge holes in the memory of those who had lost that idea. And yet, they turn ...
Whether it is sunflower, rapeseed, peanuts, palm, copra, purghère, flax… Vegetable oil burns in Diesel engines, it is a bio fuel…. "

Here is the beginning of the introduction to the report on Crude Vegetable Oil as a fuel titled: "Running on Sunflower Oil: Why and How to Put Flowers in Your Engine?" "

We would like to thank the authors of this report (mainly the company Valenergol and Alain Juste) for their work.

Read also:  The LOA on HVP

2) Some reminders about Biofuels: 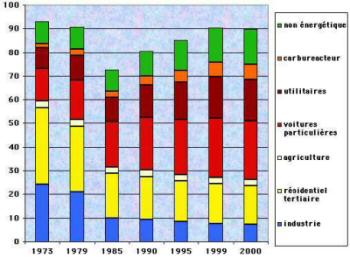 Petroleum consumption by end use in France, in 1973 2000, in millions of tonnes. the very significant decrease is noted, since the oil shock of the industrial consumption in absolute terms, and transport growth.
“Non-energy” corresponds to uses as a raw material in industry.
Source: Energy Observatory, 2002.

Perhaps this information could be usefully supplemented by the order of magnitude calculation I had made on the potential of biofuels, which may “shower” the optimism of some, but honesty does not consist it not to inform in the most objective way possible? Indeed, there is unfortunately not much to expect from biofuels (including ethanol), and a fortiori from hydrogen derived from biofuels ... Calculations on this page.
Sincerely "

Our analysis: It emerges that if biofuels cannot (in the current state of affairs) entirely replace our consumption of oil. Is there a reason not to do anything in this direction? According to Ademe, at the origin of the figures in this report, it seems so!

We believe that a more rational use of resources (increase in engine efficiency via water injection for example) combined with new agricultural production techniques (semi under cover) and organized production
(Semi-industrial) pouraient very well change all that!

3) Some tips for rolling in oil:

Use of vegetable oil in diesel engines

All 1st cold pressed oils, industrial vegetable oils and used frying oils provided they are filtered to 5 microns. (with a coffee filter, for example)

Proportion of vegetable oil that can be mixed with diesel, without risk for the engine:

Indirect injection diesel engines those that need preheating):
- up to 30% oil without engine modification.
- up to 50% oil with an in-line injection pump, type BOSCH. Rotary pumps (Luca, Cav, Roto, Delphi) are less resistant.
up to 100% oil by increasing the setting of the injectors to 180 bar, by adding an electrical resistance at the outlet of the tank (to thin the oil when it is too cold), and a pre-wash pump upstream of the pump injection to "relieve" it.

Read also:  The EconoTour, a tour of France in non-taxed biofuel!

- up to 30% oil without engine modification.
- up to 100% oil with a dual-fuel system: a second, small capacity tank is added, which allows you to start with diesel. When the engine is warm, switch to the oil tank. Before stopping the engine, we go back to the diesel tank to “rinse” the injectors, which will facilitate starting once the engine has cooled down. If it is very cold, an electric resistance may be necessary for the oil tank.

The only problems with vegetable oil are due to its viscosity greater than that of diesel. When the oil is heated, its viscosity decreases. It is therefore sufficient to heat the oil sufficiently so that it behaves like diesel. This is why a system like the one from Biodrive.ch - dual fuel with oil heating - can be installed on all types of diesel engines, without any modification of the engine itself. German companies (Elsbett) also offer adaptation kits for dual fuel.

The system is "reversible": it is always possible to ride 100% of diesel each with the changes set out above!