A new front is opening in the battle for renewable energies: the use of underwater currents.

Suspended in the air and anchored to the ground by its chains, the creature looks like a kind of seaplane deprived of its wings. In the workshop of SMD Hydrovision, a small British company in Newcastle upon Tyne, the turbines spin slowly, less than fifteen rotations per minute, in opposite directions from each other. The beast can move, roll over on itself, like an insect that wants to fly on its back. This prototype, at the 10th of the real scale, is not intended to face the air but the underwater depths. More than 25 meters below sea level but less than 50 meters. The actual size of each propeller would be 15 meters in diameter. It is one of the innovations on which the British Department of Industry is counting to open a new front in the battle for renewable energies, that of the use of underwater currents and tides. On his computer, Ralph Manchester, the young coordinator of the project, shows the machine working in the water: ebb or flow, the beast, connected to pivots on each side, turns around; the propellers stop momentarily, then start again. “We are not here to save humanity, but to prove that it is economically efficient. Now is the time to invest in ocean energy, ”says Ralph. 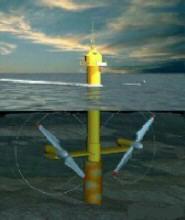 In the statistics of renewable energy sources, we find hydroelectricity (dams), biomass (from wood to waste), wind energy (wind) or solar energy. The percentage of energy supplied by underwater currents is still close to zero. If this prospect is examined today with a little more interest by the big electricity producers, it is all the same with caution. The Rance tidal power plant, between Saint-Malo and Dinard, a fixed, expensive installation, whose work lasted seven years, remains unique in the world on this scale. The rising cost of fossil fuels, climate change and global warming, the urgency to find new projects have pushed the British, faster than others, to coordinate their efforts to test and verify all projects, still unfinished, aimed at harnessing the fantastic oceanic energy. It can be destructive, monstrous, when a tsunami hits the shores of South Asia. But it is a source of hope for researchers. Its most enthusiastic promoters believe that the energy potential of waves and tides could ensure the global consumption of electricity. The tidal power has been more rigorously evaluated at 2,6 terawatts (1). Only a small percentage could be turned into energy.

If, during the last fifteen years, no one has bet a kopeck on the development of underwater turbines, companies are now pointing their noses on this market of underwater wind turbines, or rather tidal turbines. “Windmills” are rapidly flourishing in Europe. But this is not without arousing the discontent of local associations for the protection of the environment and complaints from the neighborhood about noise or visual nuisance. Eole wakes up without warning and the energy of the wind cannot be anticipated. While, if Poseidon has his rages, the attraction of the Moon on the oceans guarantees the tides, more or less strong according to the relative position of the Earth, the Moon and the Sun and the geography of the coasts. “This predictable aspect is the main advantage of tidal turbines, even if it can only produce energy 45% of the time. Tides are also more predictable than waves, which are also subject to wind. In addition, the turbines are underwater. It is less aggressive for the environment than wind turbines, but very comparable in technology. They move and can withstand the worst conditions, ”says Ralph Manchester. 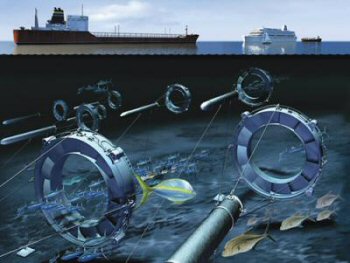 SMD does not have the most advanced project but probably the most flexible and, the company hopes, the least expensive. It has just been tested at NaREC, a British research center, and subjected to the worst conditions, to verify its mobility and resistance. At full size, the "Tidel" (name of the system) could provide 1 megawatt (MW). “I estimate that 900 homes could be powered from one unit,” says Ralph. The ambition would be to be able to set up turbines capable of producing up to 5 MW, 100 kilometers from the coast. The system advocated by Marine Current Turbines (MCT), a British competitor to SMD based in Bristol, is less astonishing and closer to the spirit of wind turbines. Large pylons are stowed in the seabed, on which the turbines slide. It all works like a kind of elevator. For maintenance and repair needs, it is therefore sufficient to raise the propellers in the air. “Ten years ago, it was still unthinkable to be able to develop this kind of technology. Now, we can estimate that this could one day provide 10 to 30% of the world's energy. Don't take me for a fanatic, but it is urgent. I am 60 years old. During my lifetime, CO2 emissions have increased by 10%. During that of my children, if we continue, they will increase by 20%. Now, we are ready to start in this sector. The question now is political and economic. We should be able to change our mental models and calculate profitability over a long period. Moreover, political power and governments do not move fast enough, ”said Peter Frankel, one of the leaders of the MCT project, which is supported by EDF Energy. A little more advanced than their competitor, MCT has set up around ten of its columns a kilometer from the coast of Lyndon, a pretty village in Devon. The heads of the masts, a sort of big yellow buoys, can be seen offshore. "People reacted very well and the only protest is that of a resident who asserts herself in principle against electric light", notes Peter. The electricity produced was not returned to the network. MCT has chosen a location where the weather can be appalling, making access to the columns impossible and maintenance of the turbines infeasible. The company is therefore planning a new installation in the south-west of Belfast. “You cannot build such parks in a passage that is too narrow like between the Isle of Wight and Portsmouth, for example, because there is a risk that the current will be diverted; you need sufficiently strong tides and weather that allows sufficient accessibility, ”continues Peter.

The two companies assure that there is no risk for maritime traffic. Either because the turbines are located far below the draft of the largest boats. Either because the masts are identifiable, like lighthouses. As for the aquatic fauna, the slow rotation of the turbines would prevent any massacre of schools of fish. But all the projects plan to deepen the environmental impact study by dint of testing. Another problem is obviously money. Without public funds, small businesses cannot afford the £ 5-10million (€ 7-14,5million) needed to research and produce prototypes. For Tom Murley, who oversees this sector within a large investment fund, HG Capital, "the technology is not yet ripe to invest." Same point of view for Jonathan Johns, head of the "renewable" sector at Ernst & Young: "The system is still immature, we have to wait at least five years." The time it takes for the most efficient technology to take hold. 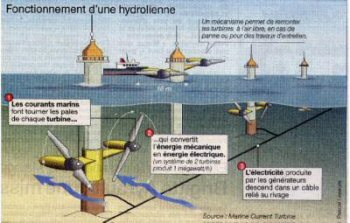 Private investors come but to see, nothing more. Without public funding, therefore, little hope of success. In France too, Hydrohelix, a Breton company, is trying to launch a project similar to those of the British. The basic principle is the same: use the sea currents linked to the tides, knowing that the density of the water is much greater than that of the wind, thus guaranteeing higher energy. The Breton project has the appearance of a “necklace of the seas”, a chain of rings fixed to the bottom, with a turbine in their center. In Norway, the installation of underwater columns supplies some houses in the village of Hammerfesten. “We know that only one or two of the competing technologies will survive, the most efficient, the least expensive. And, eventually, we will have, as in the wind turbine sector, large groups that will dominate the market, ”recognizes Ralph Manchester. Until then, we must hold on.

One of the goals at the next G8 summit, chaired by Tony Blair, is to achieve a concerted response to support these new technologies. We saw in Davos that Blair and Chirac seemed well on their way to raising the bar very high. Until proposing common financing?

(1) Encyclopedia of Energy, Volume 4, 2004. A terawatt is equivalent to one billion kilowatts.

More:
- The opinion of a CNRS research director
- The site of a tidal turbine manufacturer: www.marineturbines.com
- Wikipedia page on Hydroliennes