THEThermal Energy Seas is a renewable energy with considerable potential (which far exceeds the current needs of humanity) but which is largely unknown. Reunion Island could therefore be a pioneer in this technology within a few years? 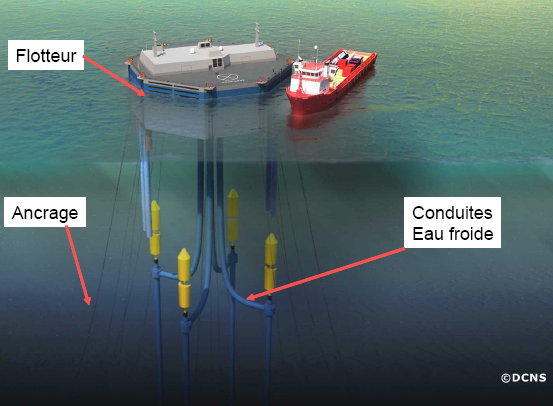 DCNS and the Reunion Region signed a Research and Development partnership agreement today, the challenge of which is to verify the feasibility of setting up a marine thermal energy (ETM) demonstrator for Reunion Island.

The Reunion Region wishes to achieve its autonomy in electrical energy by 2025. In this perspective, since 2001, in particular via the ARER, it has carried out a very active process of monitoring and strategic thinking on the technological sectors of Marine Energy. .

Among these, the Thermal Energy of the Seas appears to be a perfectly suited and 100% renewable solution for the future that could eventually wipe out the island's coal production. Indeed, the location of the island on the tropical belt makes it possible to exploit the temperature difference which naturally exists between the surface and the depths of the ocean and to produce electricity but also by-products (fresh water, air conditioning, improvement of aquaculture and algae culture, etc.).

The major advantage of ETM is its consistency, allowing energy production 24 hours a day.
In fact, the DCNS group has put its experience and know-how in the design and maintenance of complex naval systems at the service of the development of marine thermal energy. DCNS thus started in 2008 a self-funded pre-feasibility study on ETM. DCNS can in fact rely on quality naval engineering, with more than 1000 people, on proven technologies and on its scientific capabilities extended with the Sea poles.

The first results of this study will make it possible to determine the characteristics and the costing of an ETM demonstrator in Réunion, and will be presented around mid-2009.

More: Thermal Energy of the Seas

Download file (a newsletter subscription may be required): ETM in Réunion, demonstrator of thermal energy from the seas