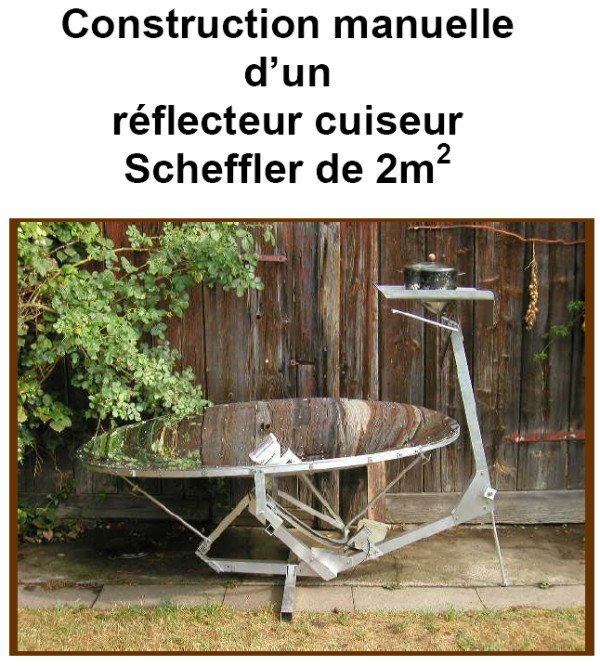 Manual construction of a 2m2 Scheffler solar cooker reflector. Cooking with the sun will give you pleasure!

This document 56 pages explains step by step how to build a solar cooker with parabolic concentration of high quality. 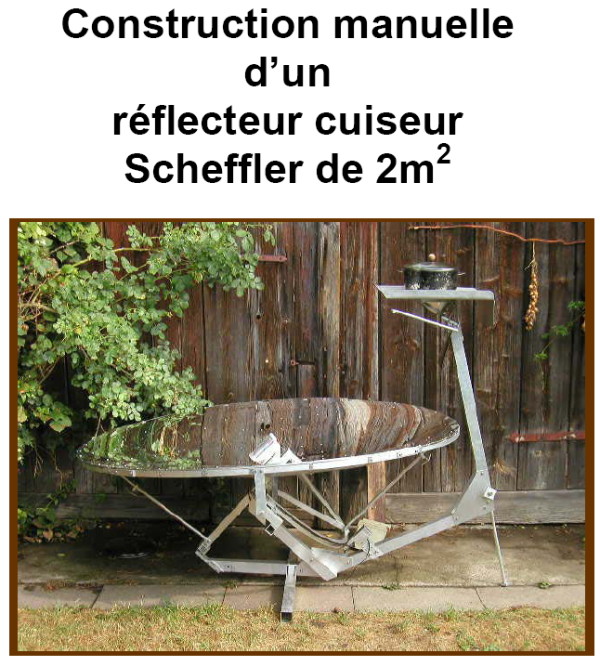 Security:
- Within a perimeter of approximately 1m around the entrance to the box location (focal ring),
flammable material must be present.
- Do not look at places where the light is concentrated, for example on the steel control valve. Use sunglasses!
- Close the valve before removing the pan from the casing place in order to protect your eyes.

Positioning:
- Install the cooker in a north-south direction with the help of a compass. The cooking area should be north and the reflector should be south.
- Lay the solar cooker flat, which means that the cooking area is leveled by adjusting the telescopic foot and the second foot.
- It is advisable to fix the solar cooker on the ground, so that it is not knocked down by the wind.

Setting:
- Move the reflector around its axis of rotation towards the sun, the tracking system will align it exactly.
- Seasonal adjustment: Loosen the two telescopic adjustment tubes and change
inclination of the reflector around the lateral axis until the light rays
reach the closed control valve. Now tighten a telescopic tube for fixing one end of the reflector.
1) Make move up reflector down through the second telescopic tube.
Get the focal point as small as possible, then tighten the screw, thereby blocking the second telescopic tube.
2) Then loosen the first blocked tube, and made the move up reflector
low to obtain the focal point as specific as possible. then tighten the second screw.
Repeat these two steps as many times as necessary until you no longer get
improvement.

To cook:
- Place the saucepan on the cooking place then open the flap.
- The use of a pan made of a very conductive material (ie aluminum) and with a thick base prevents the food from burning in the center, where the heat is strongest.
- The outer base of the pan must be black in order to absorb the solar rays.

Maintenance:
- The friction coupler on the reducer may change in its ability to resist. The
spring contact pressure on the pinion can be adjusted with the M12 nut and the
M12 against nut (use two keys 19mm).
Caution: Do not exert force on the reducer shaft when tightening or loosening the
against nut.
- The spring on the valve can be adjusted in the same way.
- To clean the reflective surface, washing-up liquid and a sponge or cloth can be used. Rinse the surface with a drop of dishwashing liquid (so no drop of water remains on the reflective surface).