Presentation of a prototype solar Striling motor project: the STHELIO

This project was carried out by the Engineering Physics department of the University of Clermont-Ferrand. 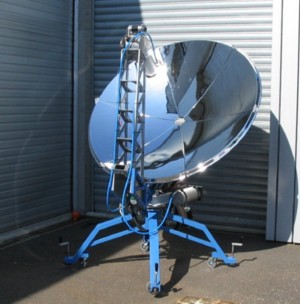 Objective of the project

The goal of this project is to realize a converter of solar energy into electrical energy by means of a Stirling type engine.

Main characteristics of the solar motor are:

Robert Stirling (1790-1878) imagined an engine using a liquid or gaseous fluid, contained in a closed chamber, heated by a heat source outside the chamber, and subjected to high pressures: the “Stirling engine”.

The Stirling engine is a thermal machine that converts thermal energy into mechanical energy and which theoretically operates according to the thermodynamic Stirling cycle.

The engine has a "hot spot" and a "cold spot". A gas circulates between these two points and thus undergoes alternately compression and expansion. This gas pulsation is used to drive a piston which recovers mechanical energy. Theoretical transformations of the Stirling cycle impose discontinuous movements of the displacer and the driving piston.

The concentrator and the architecture of the building.

The concentrator, of parabolic geometry, concentrates the sun's rays in a focal spot five centimeters in diameter located at the focus of the parabola. In order to reflect the maximum of rays mainly in the visible range, the surface of the concentrator is covered with a layer of vacuum deposited aluminum protected by a varnish. 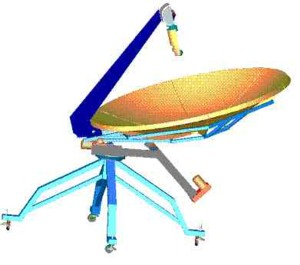 The parable on its support

The hub of the concentrator is azimuthal type, driven by two stepper motors. Mechanically, the azimuthal movement is provided by a gear motor, that of elevation by an electric cylinder.

The gas pulsation is recovered by a piston coupled, via a double linkage (mechanical coupling), to a generator which thus produces electrical energy. 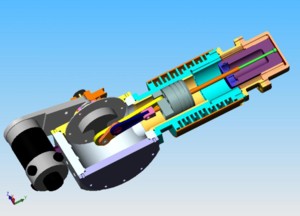 The collector (hot source) made of refractory steel is located at the focus of the parabola while the main cylinder (cold source) is cooled by circulating water.

In addition to the Beta type engine, we have studied a linear type stirling engine with electromagnetic coupling. The reciprocating linear motion of the displacer is achieved by a linear stepping motor. The gas pulsation is recovered by a piston which sets in motion a linear alternator producing electric current. This engine is therefore completely devoid of mechanical coupling except for the spring of the linear alternator. 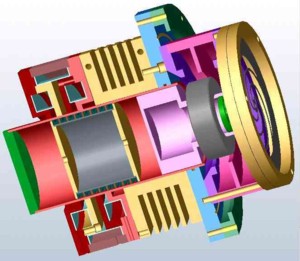 The system operates autonomously using a program developed in Labview (r) which takes into account the data supplied by the various sensors (temperature, position and solar flux, pressure, etc.). This program manages the automation of solar monitoring. 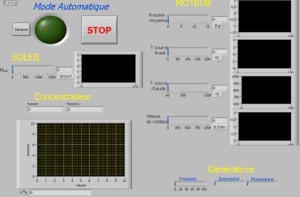