An interesting innovation in the field of electric propulsion: the fuel cell powered by a “drainable” electrolytic fluid ...

It remains to be seen: the real price of the electrolyte solution, overall balance sheet… and in any case, it will take years to find electrolyte pumps!

Learn more and technological debate about forums: As for Nano Redox Flowcell, the 2014 innovation in electric propulsion?

When I saw the technology and performance of Quant's experimental car from NanoFLOWCELL ( http://www.nanoflowcell.com/ ), which was presented today at the Geneva Motor Show, my eyes widened as ever and my amazement was complete! And yet I have seen models of electric cars. Here are two photos taken on the NanoFLOWCELL website 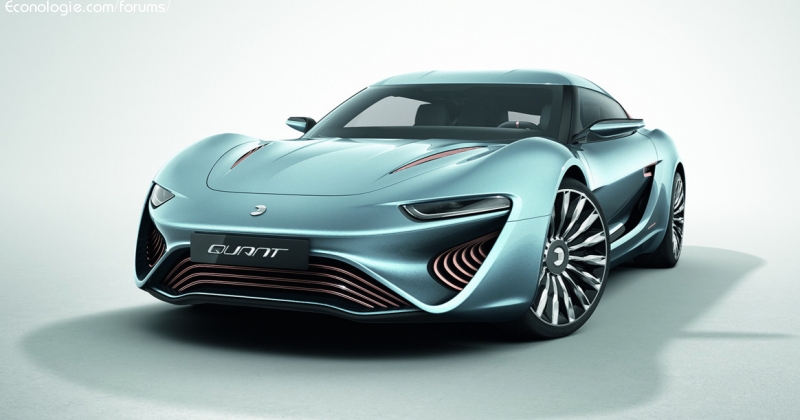 Without making you languish longer, it is a sport limousine equipped with 4 engines-wheels (170 kw peak power each) up to 380 km / h, while accelerating from 0 to 100 km / h in 2,8 seconds which would leave the Tesla Model S far behind (the Tesla Model S makes the 0-100 km / h in 4,2 seconds). And, oh surprise, we do not plug it in to recharge it. It is simply filled with 400 liters of electrolyte ("salt" water), after draining the electrolyte "used" by the chemical reaction that occurs in what is called a Redox Flowcell, a mixture of battery and Fuel cell. In principle, the electrolyte can be recycled and reused. The tank is still less bulky and lighter than the battery of 85 kwh Tesla. The result is an autonomy between the full 400 km to 600 km according to driving habits (speed).

Why have you never used Redox Flowcell until now? Well, because they are too heavy and not efficient enough. Now this is the major innovation that NanoFLOWCELL brings, they have significantly improved the performance of the current commercial Redox Flowcell, to the point that it is now possible to integrate into a car. Here is what is on the site 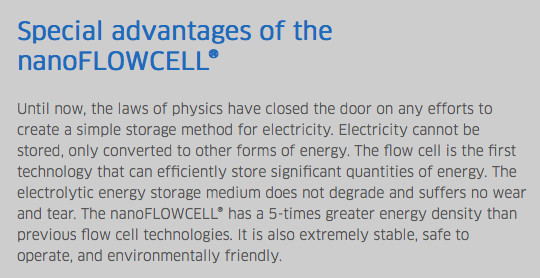 You will notice that there are two shells in the array, the specific energy units are wh / kg and not w / kg, and it is the same for the units compared in the comparison factor of the last column. They therefore improved the amount of energy stored in one kilogram of conventional redox flowcell by an 5 factor and the same 5 factor compared to most Li-ion batteries currently used, except for the Tesla or Factor batteries. would rather be 2,5 in favor of NanoFLOWCELL (The Panasonic Li-ion batteries used by Tesla have a specific energy of 240 wh / kg). NanoFLOWCELL has accomplished quite a feat!

Now, concerning the motor-wheels, if the performances that they advance are proven (170 kw by engine), they reached the level of performance that had reached Pierre Couture 20 years ago at the Research Institute of Hydro-Québec. The power of his engine, at 100 km / h was 100 at 110 kw, but let's not forget that he had an 15 inch wheel while the Quant has at least 20 wheels. Unfortunately, I did not find any information about the manufacturer. Unless NanoFLOWCELL have developed them themselves, which would be almost unbelievable given the superior performance of these engines compared to those available on the market. They would then have to their credit two revolutionary technologies. Note that they operate their wheel motors at 600 volt, which is a higher voltage than any car electric motor on the market. In addition, NanoFLOWCELL claims a maximum torque per engine of 2900 Nm theoretical, a total of 11 600 Nm! It's unprecedented. Pierre Couture had 4 800 Nm for 4 15-inch wheel motors. But wait for the real performance approved. Let's keep a little discomfort.

The wheel motors have an extraordinary advantage over a central electric motor with differential, which I did not talk about much. This is the vectorized thrust (Torque vectoring) which consists of independently controlling 4 engines by computer. This allows, among other things, unique anti-piling systems and exceptional handling. One of the four wheel motors can even turn in the opposite direction of the others. Both anti-slip and ABS braking are now only software, which can be updated by the manufacturer through the onboard communication system, without having to go to the garage for a reminder. Welcome to the 21th century.

Well, now, I'll calm down and see if the use of the nanoFUELCELL is relevant, despite the autonomy up to 600km. First of all, the electrolyte is an aqueous solution that freezes in winter, unless we can integrate antifreeze that does not degrade performance. Then there are nano load carriers introduced into the electrolyte and it would recover by recycling. So a lot of nanoparticle handling can pose a potential health risk. Then you have to drain the two tanks of 200 liters each at every 600 km and return 400 liters of new liquids. This is 8 times more volume than the 50 liters of gasoline that would have such a car if it had a heat engine. It's big reservoirs at gas stations! Finally, it is not known how much electricity is required to recharge the liquids. Will we need 10%, 30% or 60% more electricity per kilometer at the end of the day compared to a battery powered battery? These are all preoccupations with which we must have suitable answers for the nanoFLOWCELL to have a future.

Admitting that all these concerns have a positive answer, I would still put a battery of 80 km of autonomy that is recharged on the network every day, so fill up electrolytes only for 15% of kilometers approximately, instead of 100% as NanoFLOWCELL predicts. It's a lot more logical.

In closing, let us mention that NanoFLOWCELL intends to finalize 4 other prototypes this year and that he hopes to start a production in small series in 2016. To do this, they have to have their circulation battery approved for use in cars, a task for which they have teamed up with Bosch Engineering Gmbh.

What imagination and daring!