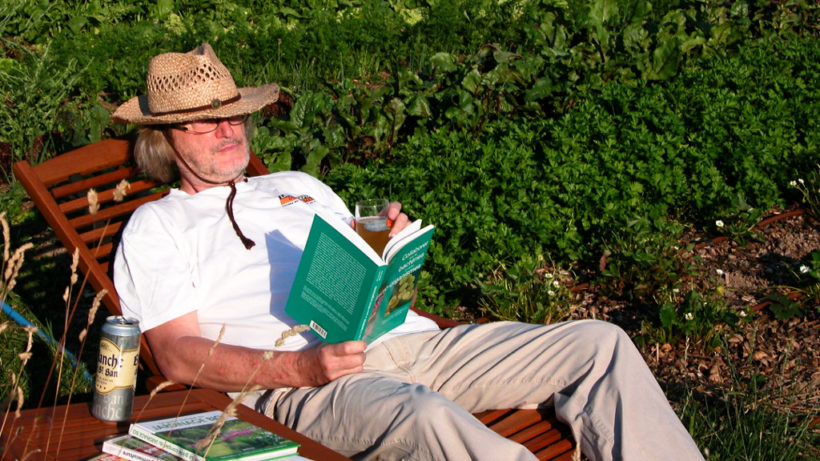 Le Potager du Laesseux, producing "more than organic" vegetables, almost without work, with yields equivalent to those of a classic garden with chemical treatments: a dream? Not with the "Potager du Laesseux"!

In what he calls his “Potager du Laesseux”, in Alsace, Didier Helmstetter is himself surprised by the results he obtains.

The idea of ​​a “workless vegetable garden” came to him after he found himself physically very weak, following a heart attack which could have killed him. Agronomist, he was well acquainted with no-till techniques, organic farming, biodynamics, permaculture ... But for his vegetable garden, the trigger, very late he admits, was the meeting with Manfred Wenz, a self-taught German farmer who has cultivated its 50 ha of mixed crops for about thirty years without any tillage.

Neither one nor two, after this meeting, his “classic” vegetable garden, which was left fallow for lack of sufficient strength to work it correctly and at the right time, was “converted” to “zero tillage”!

The sloth's vegetable garden is a very simple way to garden

The procedure is, in principle, very simple: it is a question of maintaining a permanent cover of organic matter, not already decomposed, over the entire surface of the soil all year round, and that to a sufficient thickness.

And above all never to stir the earth - not even with a grelinette. No hillocks either, of course. "Idiocy," he said dryly. “Biologically, it makes no sense: where did you see that nature buries plant debris? ". And all the same, it does a lot of work (even if it doesn't have to be repeated every year): "Just for that, it's excluded in the Potager du Laesseux!" "...

And of course, after covering the ground, it is still necessary to sow or plant. “And it will even be necessary to harvest! »Jokes Didier… And to be honest, there is also a little maintenance: some perennials will“ break through ”through the cover and they will have to be pulled out, as it will be necessary to protect the young seedlings against birds fond of earthworms or trap voles if you are in an infested area ...

On the one hand, on about 80% of the surface, Didier uses hay. This one is much richer, more nutritious than the straw, generally used: it thus feeds better the living organisms of the ground, which “will work” more and better for the laidback gardener. And as it decomposes, it brings more nutrients to the soil, where they will be available to crops. No “depressive effect” to fear either, quite the contrary.

On the other hand, for certain crops, such as strawberries or raspberries, BRF (Bois Raméal Fragmenté) is preferred. Its use is aimed at specifically stimulating the activity of fungi, which, in association with the roots of most plants, form what are called "mycorrhizae". This symbiotic association (in simple language, one would say “a win / win cooperation”) makes it possible to multiply by 100 the surface of action of the root hairs in the soil.

These mycorrhizal fungi also have the remarkable ability to extract less soluble mineral elements. Or even “stashed” substances that are difficult to access by plants. Or water too strongly retained by soil particles when we are close to wilting ...

Finally, the BFI consisting of lignin decomposition is the starting point for the synthesis of stable humus. This stable humus plays a fundamental role in the ground, the stability of it (its resistance to degradation), ability to retain water and most minerals ...