Climatic upheavals and consequences of the greenhouse effect: worrying coincidences.

By releasing the pollutants defined above into the atmosphere, man is not only destroying himself, he would upset the natural balance of regions, then on an even larger scale, of the entire Earth. The main consequence is the greenhouse effect which results in a very sudden increase, on a geological scale, in temperatures. But given the novelty of the greenhouse effect, scientists and meteorologists can only formulate more or less plausible hypotheses about the consequences of this greenhouse effect. 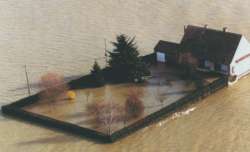 The main climatic consequences (disasters) of the increase in average temperatures (greenhouse effect and human activities) on the planet would be:

- many storms, exceptional for their intensity or frequency (unknown phenomena such as "el niño" and "la niña")

- Ice melts: at the current rate of temperature increase, 95% of the mass of alpine glaciers will have melted by 2100 (92% of the mass of the Mount Kenya glacier has already disappeared). For the first time (Summer 2000) liquid water was observed at the North Pole.

- Reduction in snow cover periods… (with the consequences for tourism that this entails, in the Vosges for example, there has been no snow for 10 years)

-… or on the contrary duration of snowfall considerably increased by the disruption of marine currents, in particular the Gulf Stream. If it did not exist any more there would be a period of 4 to 6 months per year of snow on Europe until Greece. And on the contrary, a severe rise in temperature in America (New York, which is nevertheless at the attitude of Spain, has always known long periods of snow)

- disappearance of many species, sensitive to temperature (insects) but above all whose ecosystem or food chain is threatened by climate change

- rise in the level of the oceans, more by the expansion of ocean water than the melting of land or polar ice

This list is not exhaustive and some consequences of the greenhouse effect are still unknown. Either way, the human and financial costs will be gigantic.

Estimation of the cost of pollution in CO2.

The Kyoto conference estimated the preventive cost of a ton of CO2 between $ 20 and $ 40. This cost was estimated in anticipation of the potential damage caused by CO2. In France, this preventive and virtual cost amounts, on transport alone, to 1.7 billion francs / year.

Forest devastated by the storm of 1999 (Petite Pierre, Alsace)

How to counter this ecological suicide?

Solutions quickly implemented, inexpensive and not upsetting the current financial issues must absolutely be developed in order to hope to limit the almost irreversible damage (on a human scale) that we are causing. These solutions are as much behavioral as technological ...

Because pollution will not affect, like some highly publicized diseases, only part of the population, but all of humanity, no one will be spared even if the poorest populations will be the hardest hit (as we have seen with the deadly floods in Honduras and Algeria).

Obviously, nothing has yet been scientifically proven but common sense easily makes it possible to sense the major risk towards which we are going ... and that it might be high time to develop and apply solutions instead of continuing to defend certain corporatisms ...