Small islands and the rise of the oceans!

"The very survival of island states is in question," notes Michel Petit, a French expert.

The average level of the oceans has already risen by 10 to 20 cm in a century and is expected to rise by 2100 to 9 cm by 88, due to the rise in temperature and the melting of glaciers and ice caps.

"When we say one meter on average, we must multiply this figure by two or three to take into account exceptional events, storms or hurricanes", recalls Jean Jouzel, French representative within the UN group of experts on the climate .

Islands, but also deltas and coastal regions risk being flooded with every storm or high tide. A total of 200 million people could be forced to migrate by the end of the century, their region becoming uninhabitable, according to the latest expert report (2001). With adequate protection, their number could be reduced to 100 million.

Read also:  Extinction of the Permian 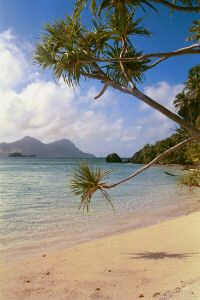 In the longer term, the possible melting of Greenland is now worrying experts. “The melting of coastal regions is already visible,” observes Jean Jouzel. This time, it is 4 or 5 meters that the sea level could rise in 3 or 4 centuries.

“Even if we completely stabilize the concentrations of greenhouse gases in the atmosphere (due to human activities), the sea level will continue to rise for centuries,” recalls Mr. Petit.

The situation is already alarming in many islands: in February 2004, the 9 islands of the Tuvalu atoll in the Pacific were submerged by giant tides, sometimes 3 meters high. The highest point of these islands is 4,5 meters.

"We do not need new scientific research on the phenomenon of rising water levels, we are already there," said Prime Minister of Tuvalu Saufatu Sopo'aga.

These once rare tides tend to reproduce twice a year. Tuvalu could be forced to transfer its population (11.500 inhabitants) to New Zealand.

Isolated, dependent on an activity (such as tourism in the Maldives), the small islands do not have the means of the Netherlands or France (threatened in the Camargue in particular) to defend themselves.

The devastating impact of the tsunami showed the lack of preparedness of States in the face of natural phenomena. The countries bordering the Indian Ocean had no warning system, unlike those in the Pacific.

Efforts to adapt to climate change risk being well beyond the means of small islands. The wave of generosity generated by the tsunami cannot mask the dramatic fall in official development assistance over the past ten years.

"Small island developing states have seen the amount of official development assistance cut by an average of half" (from 1994 to 2001), recalls the preparatory report for the Mauritius conference.