An eight meter diameter mirror parabola associated with a motor that transforms heat into mechanical energy from 2004 to Odeillo.

A 10 kW mini electro-solar generator based on a Stirling cycle and powered by a solar dish has been subjected since the end of June 2004 to experiments by researchers from the CNRS laboratory in Odeillo.

In ten or fifteen years perhaps we will see the neighborhood "plates" flourish. "Enough to reduce the combustion of fossil fuels by 10 to 15 percent, reduce CO2 emissions, slow down the warming of the atmosphere and its foretold disasters"explain the researchers. 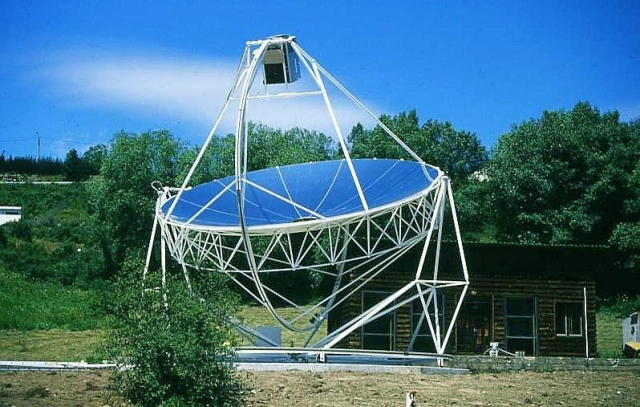 The theoretical principles have been known for a long time. The "concentration" of solar rays on mirrors, to create high temperatures, is the specialty of the CNRS laboratory in Font-Romeu, the solar center for high temperatures, at an altitude of 1500 meters in the Pyrenees.

The Stirling engine, named after its inventor in 1816, is based on the hot compression and cold expansion cycle of a gas, thanks to an external supply of heat. It produces enough energy to drive an alternator.

“The combination of the two, however, is not as easy as it seems. The dishes must be optically efficient, production and maintenance costs to allow commercial operation are still high, ”explains Jean-Michel Gineste, project manager in the PROMES (Processes-Materials and Solar Energy) laboratory at CNRS.

Already tested in Germany (the main funder of the program) and in Spain, the parabola-Stirling finds in Odeillo, at altitude, "extreme" sunshine conditions and amplified heat exchanges (bright sun, cool days or cold winters), allowing to study the device under severe conditions.

"It will take two years of detailed and permanent measures to improve the already attractive yields"explain the researchers. The parabolic Stirling-modest, are already more efficient than photovoltaic systems, and just a little less than wind turbines.

“Left dormant in the mid-80s, after the effects of the oil shocks had lessened, solar electricity is once again in full light: non-polluting by definition, it can significantly reduce greenhouse gas emissions. Greenhouse "explains the scientist.

“To produce energy, by definition, you need the sun. And the earth's solar belt generally corresponds to arid or semi-arid zones, where the installation of satellite dishes can be declined in many ways ”, explains Jean-Michel Gineste.

Industrial-sized “solar farms” for mass production, or individual decentralized installations, the relatively small dishes are easy to use.

The electricity produced could allow the extraction of hydrogen from water. The sun would thus provide the fuels of the future in sunny and underdeveloped areas for use in the developed North.