How to invest in ecological real estate?

What is the solar potential of your region? Here are 2 maps of France showing average sunshine reflecting the energy potential of solar energy.

Here is a more detailed map: DNI solar map of France and some panels and solar photovoltaic products here 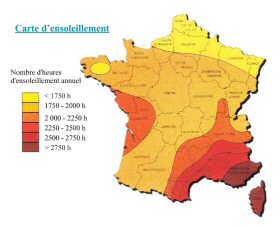 Example: if you live in the Bas-Rhin (North of Alsace) you will have less than 1750 hours of sunshine per year.

2) average energy potential in thermal kwh per year per m2. 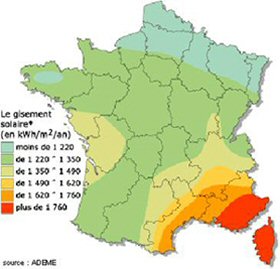 Example: if you live in Bas-Rhin (North Alsace) you will have less than 1220 kWh of recoverable energy per year.

3) Example with a concrete case: a thermal solar panel mounted in Alsace in the Lower Rhine.

At these values ​​to obtain the recoverable thermal energy, it is necessary to multiply by the efficiency of the solar panel (assuming that there are no other losses which is generally false) i.e. 70% for thermal and 10% for photovoltaics.

Depending on your current fuel consumption, so you can estimate the number of m2 required to fully compensate your oil consumption.

We noted ideally because the reality is precisely not so ideal. Indeed; in winter, solar thermal energy (due to the fairly low heating temperatures reached) can only be used to heat domestic hot water or to supplement the conventional heating circuit (before the boiler). To switch to 100% solar, you need a low-temperature heated floor (or walls).

This is why very few people use solar for heating: the vast majority of installations aim to heat only domestic hot water (which constitutes on average and about 10 to 15% of the annual energy consumption). ).

This brief calculation shows that the profitability of solar thermal is difficult to achieve for people (the vast majority of us) who do not understand that the financial calculation. Subsidies and various aids, as explained in a page of this site, do not change much… (on the contrary!)

This will be the case as long as the non-renewable nature of fossil fuels and their induced pollution are not taken into account in their costs or that ecological aspects take precedence over financial aspects during a purchase ...

The moral aspect (exactions of certain multinationals) should, ideally, also play in favor of the choice of non-fossil fuels ...

3 comments on “Map of France of sunshine or deposit”