This is no joke and the English administrations are more than seriously interested in it.

Each time a vehicle passes over the two spring-mounted metal plates making up this retarder, they move up and down, storing the energy thus developed in the process. Depending on the weight of the vehicle, it is between 5 and 50kW which are generated (on average 10kW for a classic car) which can be used to power lights and illuminated traffic signs. " 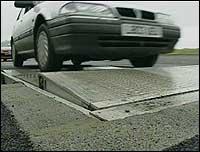 The quoted power values ​​do not mean anything because they are given in kW (power unit and not in kWh, energy unit). The energy created depends on the duration of generation of the current which in our opinion is undoubtedly quite low (a few tens of seconds at most).

Finally, the problem of storing this energy remains to be solved and at € 37 per unit (with or without road works?) It will take several million passages to make them profitable.