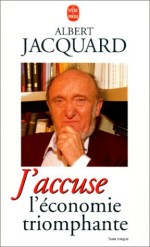 There is no longer a day when we are not told that the economy rules the world, that the laws of profitability and the market constitute an absolute truth. Anyone who challenges this new religion is immediately called irresponsible. But can a human society live without value other than market value? Taking his examples in the most varied fields - housing, employment, health, environment, food… - Albert Jacquard demonstrates the misdeeds of the triumphant and fanatical economism which today claims to govern us. Economist and scientist, tireless defender of the right to housing, he sets out here in rigorous and clear pages, supported by a vast amount of information, the convictions on which his commitment is based. He invites us to reject the inhuman fatality of economic fundamentalism.

For the famous geneticist, the fundamental error of economism is to reduce human activities to the production and consumption of goods capable of satisfying the needs of our organism; other needs are never taken into account, those on which happiness depends.