Written by David Scott in Automotive Engineer, translated and adapted by Christophe Martz.

According to Saab, the injection of water is favorable to depollution.

Water injection is nothing new, during WWII it was used to increase the power of piston engine airplanes.

Now Saab has updated this old technology, not to increase the power but to control the pollutant emissions, especially during the demands of heavy loads (high speeds or strong accelerations).
The 2.3L Ecopower 4 engine has been requested to operate at stoichiometry (lambda = 1) in all driving conditions.

Dr. Per Gilbrand is conducting some very promising experiments in this field. He is director of the department »
Drive Line Concepts in Sodertalje, Sweden. This department was responsible for work on Turbocharged engines for the manufacturer Saab.

Mr Gilbrand claims that injecting water can reduce fuel consumption by 15 to 25%, with a significant drop in HC and Nox emissions. Installation on a vehicle is simplified by simply using the windshield washer reservoir, which limits the installation of the system to a simple pump injector which supplies the 4 cylinders. 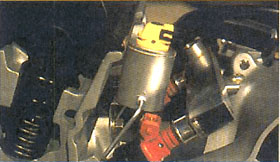 "The water in the windshield washer is already antifreeze thanks to alcohol, which gives a (small) additional benefit as a secondary fuel" explains Mr Gilbrand. "In addition to cooling the combustion chambers at high speeds, the injection of water also protects the catalytic converter from overheating."

The system is only operational during the maximum acceleration phase and when the car exceeds 220 km / h. The injection of water into the intake manifold is managed electronically by Saab's 32-bit Trionic control system. Thus the system is directly linked to the demand for power.

The Lambda probe measures the oxygen content of the exhaust and makes it possible to calculate the optimal quantities of air and fuel admitted into the engine. Its function is to maintain the mixture at the best ratio.

Water injection only occurs when the engine speed is greater than 3000 rpm. The attached graphics show how much power it allows while keeping emissions low. Thus without water injection, the power would drop rapidly beyond a certain point to keep the pollution rate below certain values. The consumption of "windshield washer" is shown in the second graph.

Water consumption seems quite significant given the flows injected but Gillbrand replies that as the injection is done only intermittently (and at high speed), the capacity of this tank is not a real problem.

Water flows injected by the system

The econology aims to show that it is possible to reconcile economy, ecology and environment. Do not hesitate to visit the forums energies and the environment et join a very active community of over 20 members!