The injection of water on high performance engines used in competition was a common custom in the 70s and 80s.

The purpose of these water injections had, at least, 3 very distinct essential roles:

- increase the admission rate, that is to say the mass of the mixture, by cooling the mixture or the intake air by evaporation of this water. Thus this increased the specific power of the engine.

- increase resistance to detonation of the mixture (in other words increase the octane number of the mixture). In this sense, this joins the injection MW50 - Methanol Water - on the fighter planes of the 2nd world war.

These water injection processes have all been banned in official Rally or Formula 1 type competition in order to limit the race to power. These processes are nevertheless still used in certain dragster or tractor pulling competitions ...

Let us now see some concrete examples of water injection in competition by: Renault Sport in Formula 1, Ferrari, and SAAB. 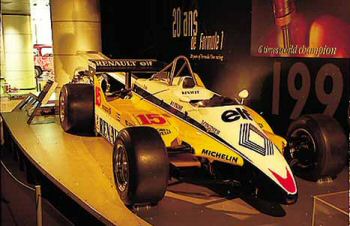 In theory, all there was to do to increase the horsepower of a Turbocharged engine was to increase the boost pressure. Nevertheless, the engine components had to be able to withstand this excess power (and therefore internal forces). This was our main concern when we started to increase the power in 1982. The first obstacle was the detonation, this phenomenon appears when a large quantity of mixture is admitted into the cylinders and causes an abnormal combustion (not controlled). On road vehicles the detonation, also known as knocking, does not cause engine damage. But in Formula 1, the detonation forces are so great that the piston can be pierced, allowing the combustion gases to pass into the crankcase ...

To reduce an engine's detonation capacity, we first thought of finding a way to cool the air in the mixture, which had been compressed and therefore heated by the Turbo. This was therefore the function of the heat exchangers (intercoolers). Nevertheless, their effectiveness was limited when the ambient outside temperature was very high (GP of Brazil) or during grand prix performed at high altitude (South Africa, Mexico…).

Under these conditions, either oxygen was rarefied by altitude or the mass of air passing through the intercooler was reduced by ambient temperature and therefore the expected cooling effect was less.

During the opening round of the 1983 season, the Brazilian Grand Prix, Renault thus became the first manufacturer to use fuel injection in Formula 1 to reduce the temperature of the intake mixture.

The system included a 12 liter water tank, attached to one side of the car and a control unit installed behind the driver's head. This control unit consisted of an electric pump, a pressure regulator and a pressure sensor. This sensor triggered the system once the intake boost pressure exceeded 2,5 bar. Below this pressure, there was no risk of detonation so water injection was not useful. The water was sucked in by the pump and passed through the regulator which kept the flow constant before being injected into the collector.

This system required to start each race with an overweight of 12 L. This weight handicap made us lose 3 tenths per lap in the practice sessions. But this was less of a drawback than the “classic” road vehicle method of delaying the ignition advance. Renault was therefore the first manufacturer to have adopted water injection to preserve turbo-compressed engines from detonation (which was destructive for the engines).

Once this detonation problem had been resolved, Renault was able to concentrate on increasing power ...

It is 1977 the 'Régie' launches in F1. the time of the settlement offers two possibilities to motorists: a liter atmo 3 or 1,5 liter turbo. While all the teams are opting for large three-liter turbo Renault made the bet with a small V6.

At Silverstone, the 17 July RS01 Renault made its first laps. Weakness of the turbo engine, reliability is sorely lacking during the first races to the point that the RS01 is nicknamed the yellow teapot because of its engines breaks into a cloud of smoke. But gradually, the Renault technology becomes more successful. In 1978 Renault turbo imposes the 24 Hours of Le Mans and in 1979, this is the first victory in the Diamond F1 at the Grand Prix of France.

From these early successes, all the teams will follow in the Renault turbo technology to become indispensable from 1983. In the early 90 years, Renault has won for six years the world title as engine manufacturer.