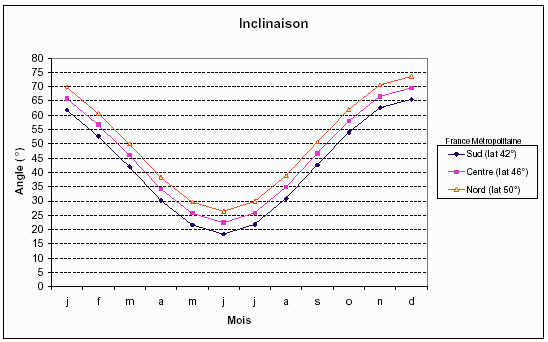 Find the ideal inclination of solar panels according to your region.

The inclination of your solar panels will depend on their annual thermal production and therefore their financial profitability, so it is important not to neglect this aspect.

Adjust the position of the solar panels.

The solar panels should be placed perpendicular to the sun for best results. The adjustment vertically requires knowing the path of the sun, depending on the season and geographical location:

The inclination of the panels relative to the horizontal is given by the following relationship:

N = number of days between the spring equinox (21 March each year) and the day considered a negative sign to the cold season.

Changes in the tilt angle are shown on the figure below (example for mainland France).
We observe a variation of +/- 23 ° (i.e. 46 ° of amplitude over one year) compared to the latitude of the place. This 23 ° angle corresponds to the inclination of the earth.

France, for practical and cost reasons, most solar panels are fixed tilt: around 45 ° as it presents a good compromise enough (summer / winter).