Oils and additives: a more than delicate marriage! Article in 4 parts, links at the bottom of the article

Who has not met one day in his readings, his entourage, on a circuit or in a local salon or national, a voluble Jean Rakonte, who gives his opinion on everything and especially his opinion?

To clarify the ideas and avoid mechanical breaks sometimes tragic and always expensive, Marc Alias ​​and the Econologie.com site give you the whole truth, nothing but the truth about the theme of engine oils, with the inevitable John Rowland, chief chemist at Fuchs UK research laboratory, without forgetting to test their prodigy oil: the Titan GT1 0W20.

Nowadays, with recent engines, especially turbo diesels, which display up to 57 m.kg at only 1700 rpm in order to reliably move the few 2,5 tons of the vehicle, more than ever lubrication has to be the object of all your attention. The life of the engine, and perhaps even your driving, depend directly on it.

However, I remind you that the lubricant must separate the parts in relative motion, cool them where the water can not or badly, reduce their friction and wear of course, but also clean them, prevent them from polluting and protect them from solid, liquid pollutants and flue gas corrosion, in particular. For this purpose, the oil must remain sufficiently liquid at -35 ° c to lubricate from the start and sufficiently viscous at 180 ° C not to break the engine running! In short, an ideal behavior not at all natural for an oil!

To remedy this, today the manufacturers draw their base oil which will make 70 85% of the weight of the final product, in two large families:

Then, and there lies all the knowledge and the final differences of the products, each brand add its famous additives. These are chemical compounds that can be incorporated into lubricants (or fuels!) To improve their basic properties or to create new ones, in short, dopants. It should be noted that they are less necessary with synthesis bases which are otherwise generally free of sulphides and phosphorus which are toxic for catalytic converters. These additives include:

With these, a base oil becomes more fluid cold and more viscous when hot in a temperature range between -35 ° C and 100 ° C or more is the principle multigrade oils. To sort out all these oils, standards have emerged.

All multigrade oils are classified according to the SAE standard by xW y with xW and y corresponding respectively to cold (test temperature = x-35 ° C) and hot (100 ° C) viscosity.

This figure must be as low as possible (0W therefore) for better pumpability and thus rapid lubrication from the start.

The other figure, 20 for this example, is the viscosity measured at 100 ° C: conventionally, it must be as high as possible to ensure an oil film between the parts at high temperature and especially not to fall too much beyond of maintain the oil pressure.

This last quality, essential, is characterized by VI or viscosity index. The higher it is, the lower the viscosity drops at high temperature. Therefore, select indices higher than 150 and do not hesitate to ask your dealer for this valuable data via the manufacturer.

Finally in terms of mixtures, the result will be closer to the inferior product but do not worry too much about possible chemical reactions since all current oils use similar bases and additives ...

When in doubt, it is best to comply with the manufacturer's recommendations.

Semi-synthetic and synthetic oils are made from unconventional bases using sophisticated chemical processes that give them special properties. Engine oils can be derived from 4 bases:

Each has its advantages and its drawbacks but overall the high viscosity index of the synthetic base oils used (up to 180 at Fuchs) allows the finished lubricant to have a naturally good behavior with regard to temperature, that is - that is to say to present a decreasing viscosity of course, but always high whatever the temperature. This property is a major superiority over mineral oils, produced from conventional bases which require the addition of viscosity improving additives in larger quantities.

The stability of the lubricant as a function of temperature guarantees its optimum efficiency both in the cold start phase which is particularly demanding on the engine (80 at 90% of its total wear!) only in the most intensive hot running conditions.

Synthetic-based lubricants also have increased resistance to oxidation, resulting in greater longevity of the oil, which spans oil changes and guarantees longer engine life. Finally, the use of unconventional bases makes it possible to produce lubricants that are more fluid, without being more volatile, and therefore with reduced oil consumption.

Read also:  The cost of using a car

Note also that a so-called semi synthetic oil unfortunately does not contain 50% but 20 30%, the rest being a classic mineral base with additives! 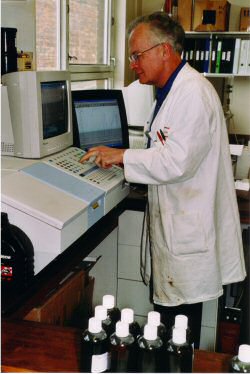 In his Silkolene oils lab in Hanley, England, John Rowland, research and development chemist in automotive oils since 33, is THE reference in this field. These opinions have values ​​of expertise worldwide knowing that Fuchs does not sell competing additives.

Originally called Dalton and Co in 1899, this leading British chemistry company became known in the 30 and 40 years by lubricating the superb V12 Rolls Royce Merlin of the Spitfires and later the famous and regretted Concorde thanks to his work on synthetic oils for the US Air Force.

At the beginning of the 1980 years, she renamed herself Silkolène. Then, in 1989, the German group Fuchs acquired it without overhauling the initial strategy in order to take advantage of the technological spinoffs in competition kart, scooter, car and motorcycle with Honda, Suzuki and Kawasaki. And this until moto gp on Hyper Bikes ZXRR.

Silkolene, a motorcycle specialist of the Fuchs Group, is one of the world's largest suppliers of engine lubricants, gearboxes, chains and suspensions, greases, coolants, brake fluids and various service products. Must have! With such an advance in synthetic oil, Silkolene dominates to the highest level. But to stagnate is to retreat from the competition. Professor John Rowland, who leads the research lab, is well aware of this and he discovers in 2000, Electrosyntec Adhesion Technology. From these innovative principles will flow the Electro Static Adhesion (ESA) which is applied today to several very high-end lubricants like the Pro 2, the Pro 4 and the Pro R Electrosyntec 0W20 derived from the Titan GT1 0W20 self become 5W30 in longlife3 version. Which brings us to the German group Fuchs, he is the first technical partner of the most famous builders of his country!