Oils and additives: a wedding more than delicate! Part 4 (read the 3 part)

All this has been confirmed to me by the many additive analyzes of John Rowland himself, the Fuchs UK chemistry leader with his 33 years of experience. He even agreed to analyze the gears of my gearbox in his laboratory. For him and this confirms the well-known endurance of Citroën BE3 / 5 gearboxes, these damages are typical of the known side effects of chlorinated paraffin additives.

I informed the manufacturer of these conclusions and other analyzes then restarted the test under the supervision of experts including Mr Rasan, and certificate from Citroën France since the manufacturer of this additive does not want to admit its wrongs ... especially with a customer as "particular" as a technical journalist!

Let's hope at least that he was malicious enough to withdraw from his not miraculous but certainly very lucrative recipe, the famous chlorinated paraffins banned from car oils for more than half a century! I'm sure he will ... but the damning analyzes are already done ...

Of course, these analyzes and other authoritative opinions of this English expert, one of the few in this little-known area where sharks exploit ignorance, remain valid for other additives, cleaners and other miracle solutions to simply include in your oils. 'origin. On this subject, if and only if you use an oil according to that recommended by the manufacturer with correct mechanical maintenance, no additives in the world can do better !

It's obvious that some people still want to ignore them. Indeed, an oil contains between 300 and 900 different molecules in precarious equilibrium valid one or two years at most. If you add so-called "miracles" additives, you will unbalance the chemical formula. The oil then degrades very quickly and loses all its qualities well before the normal emptying interval. Sorry for the mechanical poets, gullible and other fundamentalists optimizations but there are no miracles in mechanics or conspiracy of bad oil at these levels !

It is undoubtedly a pity, certainly, but it is only the truth. The hope remains but on such a level that only the majors have the qualified personnel and the means of Research and Development adequate to go even further.

In conclusion, do not expect to do better than the long-time specialist who designed your oil with additives sold in the local business or even by mail!

Once again, JR assures us that modern engine oil blends are safe except with… castor oil still used in competition for its very specific qualities. The risks of chemical interactions are therefore almost zero but still possible officially, to avoid any bad publicity, manufacturers protect themselves by advising against mixtures.

What is certain is that your mixture will take qualities close to the less efficient oils. To finish on an optimistic note, let's go to the test of the Titan GT1 which will bring a modest (to measure!) But real more without compromising your precious and expensive mechanics. 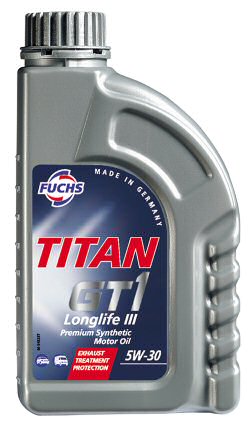 Close-up on the labels of a tin 1 tin TITAN GT1 5W30: In addition to a very special smell, this golden oil and very fluid keeps its promises!

Here we find the Julien 206 1,6 90 CV, pleased to be my guinea pig for a day. It can be understood because in a previous test with a Green Direct Intake Kit, it already won 9.2 CV DIN, + 10% in power, and 0.9 m.kg or + 6%, which is excellent and confirmed our fears about the poor engine performance of the original "European homologation approved" intake system.

By analyzing the power curves a bit, the gain goes up from low to high revs and the torque side is even entitled to a very good + 1.5 m.kg 2000 rpm, + 13%! Knowing that his MA5 gearbox supports 15 m.kg maximum, no worries. Other data from the Rotronics bench, acceleration times from 2000 to 6250 rpm on the final report, foot to floor: Small 1.6 improves 8.026 examination seconds to 7.457 is a better of 8%. Logically, this average gain in percentage must be on the road and the usual driver has noticed immediately, significant gains, especially the takeoff in 1ère much more frank 2000 rpm where the increase in torque reaches its 13% with a load noise finally manly!

Note that these high performance Green filters are also available for 4 × 4, motorcycles and even vintage vehicles! And it's made in France!

Rendezvous was therefore resumed at Chazel technology in Montpellier, well known in the world of car racing where Renaud, the boss, awaits us as curious as interested in the results on his Rotronics power bench before then after oil change… Fuch has surely a new potential customer!

In this February 16 2006, the temperature is raised to 16 ° c instead of 10 ° c of the previous "shot" to validate the direct admission Green. Despite the DIN correction and the Rotronics bench integrated weather station, with the same SP 98 gasoline, the 206 displays "more" than 103,5 ch. at 5680 rpm and 14.02 m.kg at 4841 rpm. Like what, I'm right to do all these comparative tests as soon as possible the same day to overcome the weather variations.

These first results are achieved with one of the oils recommended by Peugeot, namely an Esso Ultra 10W40 "base synthesis".

Drain, change of oil filter and three liters of Fuchs Titan GT1 on 3.2 liters max. The operation is led by a trainee BTS Mava. Return of the boss for the bench. I am serene because this motorcycle oil, the Pro R 0W20 evoked above, has already proven itself every time. The operator places the 206 guinea pig in 3ème and accelerates thoroughly to M. Chazel's signal to the control PC. A loud throaty sound is heard before giving way to those of the engine and rollers. At M. Chazel's second signal, the operator disengages and the losses of the transmission until the clutch are calculated to obtain a power "engine". Positive verdict at the plot of the curve in real time and the exact figures then fall: 107.1 ch to 5872 rpm and 14.33 m.kg to 3327 rpm, this time. That is a gain of 3.4% in maximum power and 2.2% in maximum torque. The curves obtained with the Titan GT1 are always above the old ones except towards 5000 rpm or they are very close. Note also, the acceleration gain following the increase in torque with a time that goes down from 5.865 second to 5.735, is 2.2% better. Figures "credible" by specialists and perfectly announced by Fuchs. 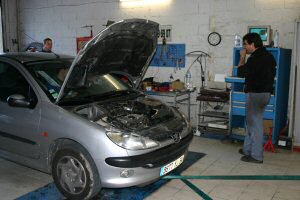 On the right, Mr Chazel orders the passage to the buried Rotronics Autoscan power bench to enable the measurement of cars as low as Renault formulas, for example. This custom bench available for your personal measurements, is capable of measuring 600 hp at over 300 km / h with a cooling wind of 70 km / h…

Click to enlarge. As you can see, the Titan GT1 keeps its promises with torque and power gains everywhere! It remains to verify the decline in consumption that already exists, logically. Indeed, the owner confirmed me an average autonomy of 600 km instead of 500 km with 2 cumulative improvements of the oil and direct admission kit with Green air filter. 20% of gain!

In other words, average road consumption has dropped by 20% ! So who says better and… without mechanical risks, of course?

In conclusion: be attentive!

Again, the best is the enemy of good. So in doubt, refrain from adding miracle additives to your oils on more and more sophisticated machines sensitive to product qualityI would have warned you!

In case of breakage or damage, do not hesitate to contact an expert, a voucher, and a consumer defense service, like the UFC and even, with a little luck, if you regroup within a Association, Stop Scams.