Oils and additives: a wedding more than delicate! Part 2 (Read the part 1)

In short, the Electrosyntec technology is based on the positive magnetic polarity of metal surfaces that constantly attracts negatively charged oil molecules. Thus a thin "mille feuilles" composed of 10 50 layers of oil molecules remains on all motor organs even at rest so also at restart. Note that the overall thickness of this electrostatic film is on average 100 times lower than ordinary, so does not ensure a good oil pressure only with modern engines with reduced games, notice to preparers ...

Advantages of this 0W 20 ADP? No wear at startup, an extreme friction reducing additive that facilitates the work of the starter and allows a gain between 2 and 5% power and finally, a film withstand in extreme conditions thanks to very high temperature special esters from applications US space.

In addition, to maintain the efficiency of the depollution system, this oil has been freed from zinc and other heavy metals such as sulfur, phosphorus, sulphates which end up poisoning the catalytic converter and us with…

To replace these good metals, additives of the past, a new technology was invented that also allowed consumption gains up to 3%. On the other hand, the reduction of oil consumption to respect the long oil change intervals and the environment requires a gain of 23% of evaporative losses compared to other synthetic oils. In addition, the absence of zinc and other heavy metals ensures a longer period of efficiency for particulate filters and catalysts.

Extensive aging tests have revealed a lower toxicity of waste oils in terms of phosphorus, sulfur or sulphides.

Despite its low viscosity, its high performance additives allow it to withstand and protect the engine even under the severe conditions of recent high efficiency Turbocharged TDI engines. And we can trust German chemists, masters in the field since always ...

At Silkolène, his Moto version in the Advanced Development Project (ADP), was brilliantly led by J. Rowland in 2000 from its Auto version, the Titan GT1. First tested successfully during the 2001 Super Sport season on the official German Kawasaki ZX9Rs, she will re-enter the Kawasaki ZX6R of the 2001 Super Sport World Champion, Andrew Pitt, and then the Champion Superbike GB 2002 (Mr. Hislop ) and other Ducati! From 2002, ESA was also introduced in the Silkolène range which has even been enriched with the Pro R 0W20 rather reserved for competition, given its low viscosity.

Now, let's turn it over to John Rowland, the chief chemist of the Fuchs Lubricants research and development lab in England, who is behind this breakthrough as rare as it is today.

JR: "This oil was declined from the Titan GT1 OW20 auto for 4 engines time prepared for the World Superbike in partnership with Kawasaki. Like the GT1 Titan, it is based on special esters and DTPs to combine the benefits of both. This Pro R 0W20 is therefore much more than a low viscosity to avoid film breaks and the usual losses of this type of oil in competition. To avoid this serious problem, we have introduced many additives to reduce friction in the distribution and transmission thanks to a proprietary polymer, very resistant to temperature and shear despite the very thin film, about 100 less than a conventional reference oil. His resistance is comparable to a 10W / 40 or even an 15W50 synthesis API SJ but it saves more between 2 and 5% power!

The very low viscosity allows gains on the sparging of the gearbox, the clutch, the pumping, and its greater speed of circulation at equal pressure, better cooled the engine. The current oil pumps are often very oversized and provide a higher flow for the same pressure with motors with low internal clearances so not very kilometers or often redone. Your experience proves that this oil is perfect for the 12 000 km of road instead of the 200 km run but it would be prudent to monitor the oil pressure when the engine ages! Note also that to obtain a viscosity index above 180, good for the engine, we must use many additives destroyed by the gears of the gearbox motorcycle, which is not the case in cars! Finally, a clarification on this mysterious ESA: it concerns the lubrication in non-hydrodynamic regime of surfaces such as we can meet between the camshafts and the pushers or between the segments and the cylinders. "

JR: "For decades, recurring commercials have been touting the benefits of this or that extra treatment of your oil or engine with spectacular gains that are supposedly verified. Obviously, we are tempted to believe it!

First of all let's think a little: in a 4 gasoline engine, 60% of the initial energy contained in gasoline is lost thermally in the exhaust and cooling. On the remaining 40%, between 7% (in city or low load) and 25% finally come out of the engine to attack the transmission. On the remaining 15%, 6% is lost by pumping air at the intake (and especially at low throttle angles) and to ensure exhaust. 6% is lost by pumping liquids and by viscous friction in the oil. There remain 3% losses due to friction. Yes, only 3 small% to win. So it is strictly impossible for an anti-friction additive to do better!

On the other hand, one can play on the 6% of the pumping and the viscosity due to the oil. That's exactly what we did for the ADP 0W20 and it really works, without special risks for the engine. To conclude on additives or miracle economizers, my many lab tests and my 33 years of experience led me to these 4 rankings:

Read also:  AdBlue, to limit the pollution of diesel vehicles

Finally, on a 2 stroke, the oil mixture of the separate lubrication or not, attacks the aluminum of the piston permanently by forming a deposit of aluminum chloride which will cause the tightening!

On behalf of Fuchs oils, I formally forbid the use of 3) and 4) additives with our products and declines our responsibility in case. Notice to sorcerers and gullible people of all kinds! "

MA "Thank you for this warning that from an expert like you, can not be doubted! In my case, I confirm the case of my gearbox of my Citroën BX TZDT additive after almost 2 years and 20 000 km only! "

Thanks for the clarification, Mr John Rowland. And this is not the first time that an explosive article has appeared to these subjects because another additive based on the same chlorinated paraffins, ZX1 (or X1S in our country?) Has been tested for 2 hours at 100 ° C with thickening incredible oil and strong corrosion of the 150 metal samples that plunged there! Another eminent American specialist, Maurice E. Lepera, consultant in oils and fuel for the US Army (where chlorinated paraffins are prohibited!), Confirms these criticisms in his August 3 article “Chlorine and engine oils: a good mix ? », Once again, it is a definite NO. The author even noted that at least 1998 additives already claim to be “free of chlorinated paraffins!” … To be continued! 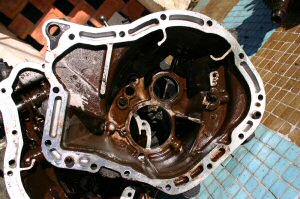 Close-ups on the crankcase of my ex gearbox BE3 / 5 250 000 km out of 5 after a test of "rather" aggressive additive on 20 000 km! A curious blackish deposit and an emptying as fluid as water were the early signs of this announced mechanical disaster. But, that's certainly not in the package of additives with chlorinated paraffins! 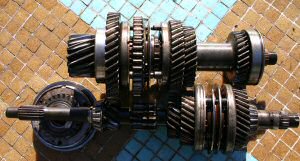 Here are the primary (bottom) and secondary shafts of this BE 3/5 well known for more than 20 years at PSA. A box without fuss except the nut of the 5th gear which can sometimes be unscrewed despite the brake plate at the end of the secondary shaft where the breakage occurred (top right). That said, the damage would not be the same and my nut was tight during disassembly ... 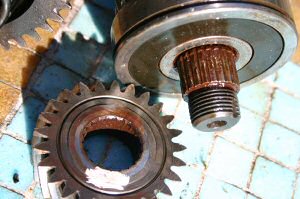 Zoom in at the end of the secondary shaft: an unprecedented corrosion never seen at Citroën got the better of the male splines of the shaft and female of the 5th gear. This secondary shaft being the low point of the gearbox on the vehicle, hydrochloric acid, heavier than oil, caused the maximum damage to it ... 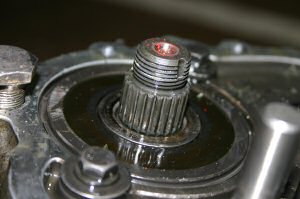