by Christophe
As Emmet Braun said the 2ieme greatest mystery of the universe, after solving the spatio temporal journey is the woman!

Hey Citro where are you on these points?

Here is a Special Issue of "Brain & Psycho" quite exceptional to read, title: Brain Man / Woman: what differences? . It is a publication of Pour la Science, it is "heavy" based on scientific studies (mostly American) over years ... 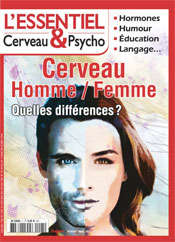 It will still be available in Kioske until the end of April 2011, otherwise on purchasable on the site.

Articles on the influence of hormones on the functioning of the female brain are particularly interesting, 2 examples:

a) The brain of a woman who has been pregnant one day is changed forever (more able to protect her endings, to feed them ...)
b) The functioning of the female brain is much more symmetrical than that of men (they are therefore more multitask but less precise on certain spots) ... except ... during the rules where their operation meets the asymmetry of men!

Interesting is not it?

"It's not my fault, it's my hormones" will never have been such a valid excuse ...

Although controversial, “human brain dimorphism” is increasingly well documented. The purpose of this issue of L'Essentiel Cerveau & Psycho is precisely to present the great differences which distinguish the psychology of men from that of women. Because, whatever some may say, men and women do not have the same tastes, skills, areas of interest or behaviors. Some of these dissimilarities are notable, others less so.

The role of hormones

* The maternal instinct nested in the brain
* The mysteries of the female brain
* Cognitive specificities
* The new fathers
* Male brain, female brain

The influence of education

* The truth about girls and boys
* Are girls bad at math?
* Abandoned diversity?
* Different styles of conversation
* True or false ?
* Different all life

Lighter but in the same genre, a Paul Dewandre show "Men come from Mars and women from Venus" which is a hit: http://www.mars-venus.fr/

It exists since 2006 but remains little known!

From the same author: http://www.youtube.com/watch?v=6gEg53USHeo
by dedeleco
On the last Koh Lanta, this difference between a man in front of a compass and to find his bearings was amazing, even incredible, in the test of orientation on plan !!

There are exceptions, but the instinctive behaviors towards the centers of interest are statistically clear and clear.
by Obamot
Whoever does not know the difference between girl and boy, we can try to explain to her ...

by Christophe
Obamot, your last remark is not in our favor ... in the sense that men would think with their sex ...

Well we will put this on the account of the fatigue of Saturday night ...

(well what am also a man)
by Obamot
Rhôooooo, what a misplaced spirit! I drew the very stereotyped general appearance:
1) the length of the hair.
2) a pif between a pair of glasses, to see more clearly.

hi, hi, hi well let's go back to it ... On a strictly medical level, why put “psychology” in brackets? It's a bit our disease to sectorize everything in science, whereas as soon as we start to dig a little we realize that in the interactions, many things are linked (environment, biology, chemistry, food sources and therefore metabolic reactions , all with the intervention of the brain and hormones at all levels ...)

Regarding these, we have a bit of both in us! Until then we agree ?! So we are going to have to put in the big generalities whereas we are all peculiar cases ... All that I am going to say is thus ARCHI-FAUX

I do not intend to go to the end or hell the turn (no pun intended) others have tried (broken nose!?!) Before me, starting with the games historical power that goes back to the dawn of humanity and never stopped in all civilizations ... There are traces in all sacred books, to the definition "Good vs evil", who would sometimes claim to dictate to human beings their conduct ... We even find a relatively symbolic trace to the "binary" world of computers, right?

Indeed, I think your direct answer goes straight to the point and goes in the right direction (^^).

Still should we agree on what means "Think with your sex". Then agree on other definitions among various criteria of influence, from instinct to thought, from intention to action ... Is it a conscious or unconscious process? What is the implication of this in our reference social models? What is the share of biology / chemistry Etc.

If the ego, is part of something related to sex, with as governance a marked interaction of hormones. So yes, we male people think directly and / or indirectly permanently "with our sex", I mean for those who are presumptuously "The strong sex"!

At this stage, it is claimed that humanity is superior to the animal thanks to the intellectual faculties (I let you judge! ^^)

Where is one often mistaken (all the time?) ... it is to think that the people of the feminine kind would not do the same? => ie think with their gender (Neither those of kind / s less common elsewhere). I think it's very wrong. Probably our companions are more "directed" than us (every month they have a metabolic phenomenon that reminds them to their good memories and us to their changing mood.

Of course we are wrong, since "we males" we do not talk about it (or too little) is a taboo subject since as a "strong sex" it should be us who should have the "power" Besides, it would be better if we did not talk about it too much, because otherwise it often gets out of control (aaaah le 'brain'! ^^)

We see it well in the sexuality or "dévergondage" is often attributed to the male sex. Yes but that - it must be repeated - is because of our social codes (we hide, always we hide). So historically, the sexual revolution was aimed first to men (do not push me ... there we are in the "fat" ^^) ... I do not dare to talk about religion, it is the "Day of the Lord" ... Well yes, let's talk about it! Sexuality is not "shamelessness", it is directly related to what societies are able to "manage socially" in terms of gender, it is a kind of reliable indicator of the evolution of 'humanity, no ...?! Since one can not cheat long with it (there I do not speak of the kind, but of "the thing" ^^).

So here I am going to go against the grain saying that our companions are naturally more inclined to "the thing" than us, only socially it is a taboo very impassable, since it goes against the social practices, ideas received, education, culture etc ... (After as they are "in advance" on us from certain points of view they did the trick of the question "Earlier" in life (if, if ...), and probably because being "more sensitized" they seek stability, fidelity and other values ​​... (which does not mean that we do not do not do) is where "it goes to the brain" would say the poet ^^) ... Although there is no harm in all this, what can we do about it as long as it is hormonal ...? Compensate not with the muscles but with the heart (because with the brain, ha, ha, ha)

In short, we will not remake the world even if it's tempting ^ ^, there is so much to say (to do ^ ^). Probably one of the questions to ask oneself 'biblically' (if there was only one ...) would be to know if we would not all have to gain from advancing through dialogue, to open our minds and our hearts to these "manifestations of nature" hi, hi, hi ...
by Christophe
Finally it was less tiring to read you and understand you when you were tired

The () is just to say that it's not an 100% econological subject ... but I can fire it ...
by Obamot
You would not have found the perfect thing for "getting into the debate"?

(I think, on the contrary, that the way in which the world ultimately works, this primarily affects our relationships and decisions about ourselves and the environment.) Is there a section "Psychology"? and living environment ", maybe it's time to create it)
by sen-no-sen

dedeleco wrote:On the last Koh Lanta, this difference between a man in front of a compass and to find his bearings was amazing, even incredible, in the test of orientation on plan !!

There are exceptions, but the instinctive behaviors towards the centers of interest are statistically clear and clear.

Well, hello references dedelco! you disappoint me on this blow!

The difference between men and women? Bullshit! At the top of the hierarchical ladder, the reptilian predator side erases all differences!
Go ask that Condoleeza Rice!
by Obamot

sen-no-sen wrote:The difference between men and women? Bullshit! At the top of the hierarchical ladder, the reptilian predator side erases all differences!
Go ask that Condoleeza Rice!

She has as much humanity in her eyes as a tiger shark spying on a sea turtle!