Death of Pierre Rabhi (at the age of 83)

Death of Pierre Rabhi (at the age of 83) 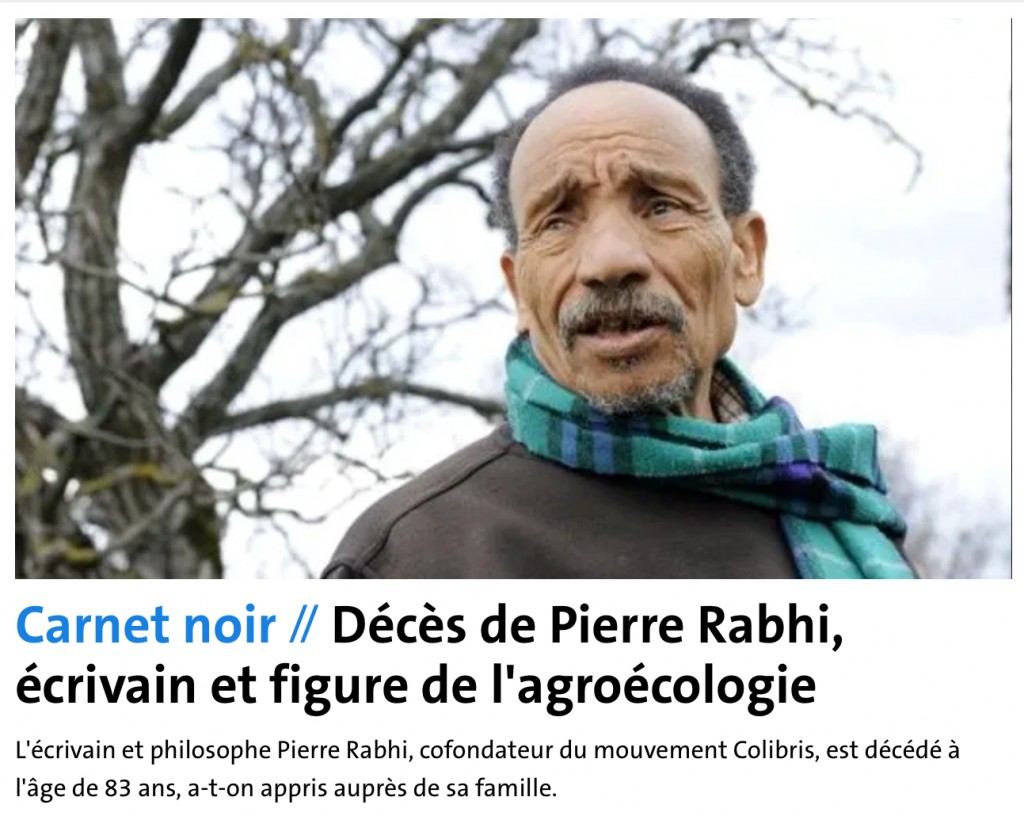 It is more than a figure of agroecology in France who is gone, a philosopher ... a humanist ... a writer ...

A wise character who had more than one string to his bow.

May he find rest, his work will survive him through his books and associations ... (Colibris movement, etc.)
A beautiful life, full and engaged.

How many valuable personalities such as him have been pushed out of the limelight by the current madness which separates society?
4 x
Comedy-Club of “funny”: ABC2019 RIP, Izentrop (misanthropist) RIP, Exnihiloest, Pedrodelavega (Ex PB2488), Sicetaitsimple (Kiki) RIP
Haut

Hey shit! Another good that leaves ... to leave even more room for the scoundrels € $?

I am in direct contact with Juliette Dusquene (I was therefore N + 1 contact of Rabhi ...) who co-wrote with him the "Carnets d'Alerte" collection in recent years ... the last one a few months .. .

https://www.econologie.com/carnet-alert ... -duquesne/
4 x
Do a in-depth image search or a keyword search - For good exchanges between members - Publish an article on Econology and Google News
Haut

https://obsant.eu/veille/?rch=Pierre%20Rabhi
0 x
"Details make perfection and perfection is not a detail" Leonardo da Vinci
"Nothing is born or perishes, but things that already exist combine, then separate again" Anaxagoras of Clazomenes (500 BC)
Haut

=?
0 x
Do a in-depth image search or a keyword search - For good exchanges between members - Publish an article on Econology and Google News
Haut

Did you open the Champagne to celebrate, Izy?

0 x
"It is better to mobilize your intelligence on bullshit than to mobilize your bullshit on smart things. The most serious disease of the brain is to think." (J. Rouxel)
"No ?" ©
"By definition the cause is the product of the effect" .... "There is absolutely nothing to do about the climate" .... "Nature is shit". (Exnihiloest, aka Blédina)
Haut

more slanderers on this fantastic advance of the human spirit that is anthroposophy, inspiring biodynamics dear to Rabhi

1 x
To pass for an idiot in the eyes of a fool is a gourmet pleasure. (Georges COURTELINE)

more slanderers on this fantastic advance of the human spirit that is anthroposophy, inspiring biodynamics dear to Rabhi

If we look at the quirks of the minds of those whose science currently recommends itself, we could put 3/4 of them in the trash and its authors too. For example all the delusions of Leonardo da Vinci or the approaches of Newton on prophecies, follies of Pasteur, then demonstrated as false, even in all the bullshit of the pseudo-zeticians of AFIS, some useful and interesting points.
Indeed, through knowledge which progresses, thanks to technology, certain concepts are not confirmed by this one. It's in order of things!
But there are some crazy people who still cling to these outdated concepts, for example the theories of Pasteur, who, if he had been a doctor and not a chemist, would have found himself excluded, banned from the scientific community for his experiences worthy of those of Nazism and of which, however, its followers, who have now become the most numerous, sing praises, like your sect!
Between this mental patient (and physical by his paralysis) narcissist who believed he could save the world by his pseudo-vaccines, and a sweet dreamer who had the same hope, in agroecology, the choice should be quickly made!
1 x
"We make science with facts, like making a house with stones: but an accumulation of facts is no more a science than a pile of stones is a house" Henri Poincaré
Haut