EVERYTHING, absolutely EVERYTHING, is said in 30 minutes of this interview of October 8, 2020 ... Bravo Jean-Marc !!

but the debate is far from over!

Shock sentences, it hits seriously, and reducing GDP by 4% is inflated, saying that if we do nothing it will be worse ... It marks.
I like its syllabus, which each time comes up with the argument for what awaits us in the review of hypotheses.
Lots of common sense. Just a downside, still not a word on thermodynamic solar energy.

Ah, and we need to find “good” economists then ...

I read that no more where, none would have ever predicted a crisis!
... good stalking ...

On hydrogen: fossil-nuclear-energies / stored-electricity-hydrogen-and-hcooh-la-revolution-t10849.html I don't have the feeling that the results are as negative as they claim, at least with this technology, but I admit that I don't know enough. 60% yield but 60% of what?
2 x
Haut

The great virtue of hydrogen is that it is a "glamorous" energy which, therefore, immediately defuses any criticism and makes everyone agree. You have to be a real killjoy or singularly lucid to remain objective and see that the projects that we wave under people's noses do not hold water if we take the trouble to consider the whole operation and not certain particular points, objectively more favorable.
This is the case towards my home where, to the general enthusiasm of elected officials, hydrogen buses (fuel cells → electric motor) are being considered. The hydrogen would be produced by a dedicated station, powered by the wind turbines that flourish around, so devilish green "juice"! If we add up the successive yield losses, the investments (no big deal, there are subsidies!

) and operating costs, we must be far from a trolley animal that would have the merit, but also the handicap (that's no dream!) of being a simple and proven solution ...
2 x
"Do not believe above all that I tell you."
Haut

Yes and no .... self-produced solar H2 à la Jean Luc Perrier it was still nice ... and could have, should have, changed the face of the world ... and of the climate ...

After the massive use of H2, via its leaks, could greatly worsen global warming according to recent studies ...
0 x
Ce forum helped you? Help him too so that he can continue helping others - LET'S IMPROVE OUR EXCHANGES ON THE FORUM - Publish an article on Econology and Google News
Haut

I do not deny that hydrogen can have interesting applications, what I am saying is that the project I am talking about is, in reality, a gas plant (without laughing!) And that its complexity weighs down on him. downright.
0 x
"Do not believe above all that I tell you."
Haut

Indeed, the current craze for hydrogen "energy" is absolutely incomprehensible: it will still cost us 11 billion if I believe the latest government decisions ...

Hydrogen has several handicaps for use as energy storage (especially for transport, etc.); on the one hand, this gas is difficult to store (it crosses practically all materials), difficult to transport (low energy density by volume) and requiring prior compression, very difficult to liquefy, but in addition its manufacture, storage and use lead to a final efficiency wasting three quarters of the energy injected. Faced with the available alternatives (electricity in particular) in the field of transport, in theory it has no chance.

It is all the more regrettable to embark on such a dead end as carbon-free hydrogen would easily find its place as a substitute for coal in the steel industry (or metal ores in general), or in chemistry (fertilizers and plastics), for which there is no alternative.

On the other hand, I do not see what impacts it could have on global warming because of the leaks; the hydrogen is so light that it shoots directly towards the upper atmosphere, where simple Brownian motion is enough for it to reach the speed of release and to escape to outer space; it is therefore not stored in the atmosphere.
3 x
Haut

Hydrogen is a fantastic way to crystallize the immense volume of fictitious liquidity which has been expanding rapidly since 2008.
The economic system is a kind of mirror of the universe, it creates potential (QE, debt etc ...) to which it gives "life" by adding a "mass" (innovation 2.0).
For investors, hydrogen is the replacement for oil, but a green oil and supposedly deprived of its deleterious characteristics. All of this allows us to continue to grow, while being able to look in the mirror in the morning.
2 x
"Genius sometimes consists of knowing when to stop" Charles De Gaulle.
Haut

Yes, it is one of the means of investing these funds "in pain", even if they are doubly fictitious, which is facilitated by the high cost of this kind of installation and the favorable opinion of public opinion: l is not the economy based on belief?
0 x
"Do not believe above all that I tell you."
Haut

While I fully agree with the fact that hydrogen does not solve the abysmal deficiencies of the dominant economic model, it is still necessary to rectify certain points:

— will the current economic model outlive itself in “the world after”? There is a good chance!
— Ah but my good Môssieur, hydrogen is too expensive? Society choice, but it will always cost less than warming!
— "Hydrogen poses insoluble storage problems" Not in fuel cells, neither as formic or solid acid!
- “the final yield would be unfavorable”. Regardless, thermodynamic solar energy will require an area taken from the desert as small as the Albani, to cover the total energy needs of the planet. It will therefore be possible to dedicate power plants to the production of hydrogen,
0 x
Haut

bardal wrote:On the other hand, I do not see what impacts it could have on global warming because of the leaks; the hydrogen is so light that it shoots directly towards the upper atmosphere, where simple Brownian motion is enough for it to reach the speed of release and to escape to outer space; it is therefore not stored in the atmosphere.

Apparently the atmospheric H2 attacks the free OH- radicals which are at the origin of the destruction of methane (and undoubtedly other GHGs?) ... we don't talk much about it and research is recent ...

ENERC wrote:According https://www.nrcresearchpress.com/doi/pd ... 39/v75-482, the reaction constant is close to that of methane (3,9 against 3,4).
So the effect of hydrogen is almost the same as that of methane.
The concern is that in a hydrogen-based civilization, H2 leaks may well be much higher than current methane emissions: it is enough to see the testimony of owners of mirai who find the empty tank after a few weeks without riding.
The table is at room temperature: it may be a little different at high altitude, but it remains in the same orders of magnitude. 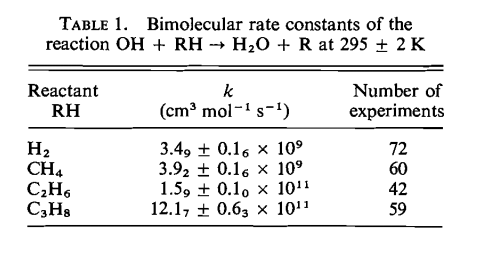 So the problem is extremely SERIOUS, the H2 used massively (fortunately it's not tomorrow the day before ...) could further accelerate global warming ... we must therefore fight against the development of H2 ... me who was for 20 years a defender of H2 it saddens me a little to have to say that ...

0 x
Ce forum helped you? Help him too so that he can continue helping others - LET'S IMPROVE OUR EXCHANGES ON THE FORUM - Publish an article on Econology and Google News
Haut
New topic Reply
14 messages