Can an airplane on a conveyor belt take off? (resolved)

Macro wrote:... Like some paragliders from the top of a simple beach dune ... But perhaps they are no longer paragliders, the discipline has perhaps another name ...

It's soaring but it's still paragliding ...

The relative wind necessary for takeoff is what we are trying to create in this problem!
0 x
Do a image search or an text search - Netiquette of forum - Support the forum doing Useful shopping
Top

@Totophe:
You could write 20 tomes of 3000 pages that it wouldn't change the fact that if the plane isn't moving, it can't take off even with its dongle engines. On the other hand, at this regime, it is not forbidden to think that he and the treadmill can fall apart after a while. But all this is only a sight of the mind ...

0 x
Obamot wrote: Apologize for all the wrong you've done! Apologize here right away — especially to Christophe — and try not to do it again. It's not a “gag”. It's your only chance. If you wait too long you will pay a very, very high price later, a price you don't even suspect.
Top

That's what I've been saying from the start!

But that Ahmed disputes ...

A treadmill can transfer power to a freewheel well ... provided there is sufficient contact force ...

Very tired I am

Flytox wrote:AMHA, the reactors push backwards, so the zinc is pushed forward in the same way (reaction). Support is done on the air "horizontally" and not on the track in one way or another. So the zinc moves forward, so there is air flow on the wings, which will create the necessary lift when the speed is sufficient, the zinc takes off as usual.

I doubt it because “the balance of this system” would hold by the fact that if as it appears in the definition of the problem, the treadmill exactly compensates for the rotational speed of the wheels, the zinc cannot be pushed forward, it remains stationary since the conveyor belt would not move forward. There would therefore be NO possible support on the air. The anecdotal airflow in a storm at an airport is not enough to lift a 747. So the necessary 'lift' would range from “does not seem to be carried out except slight in the event of a storm"To rather"close to zero ”. The zinc would still not advance. And so the “when the necessary lift is reached" it would be "never"Or"all of a sudden”But uncontrollably and very violently, see point“ 3 ”below:
(Because at some point there would inevitably be a tipping point on the weakest link in the balanced system ... correct me if I'm wrong, but without being too wrong what I said is absolutely correct)

1) I explained the suction phenomenon which is correct, on the ground, the air in the front would be pushed backwards and would create a relative vacuum in the front, quickly filled as a fluid (but the phenomenon is visible on the ground), because it is then that in the video below, we see this curious phenomenon of the air which seems to come from behind to go forward, which seems to defy the effect that the 'we imagine a reactor in operation (but only in appearance). We can see it perfectly in this sequence of an airplane with the wheels locked: (it only lasts 5 seconds, and the effect cannot come from the wheels, because those of an airplane are not driving). So the question of the possible lift at a time “T” would in any case be null or hampered / disturbed by the co-lateral turbulence produced by the immobility of the airplane and this “vacuum cleaner which would work ã donf ... reactors in acceleration at maximum take-off thrust ”)

Speed ​​at which tires can explode / ignite, here in a rough landing:

(Explosion of several tires, rewind at 3:14) So without wanting to be categorical, and as I described it, it is from this moment there, on the ground, that everything would go into a spin ... 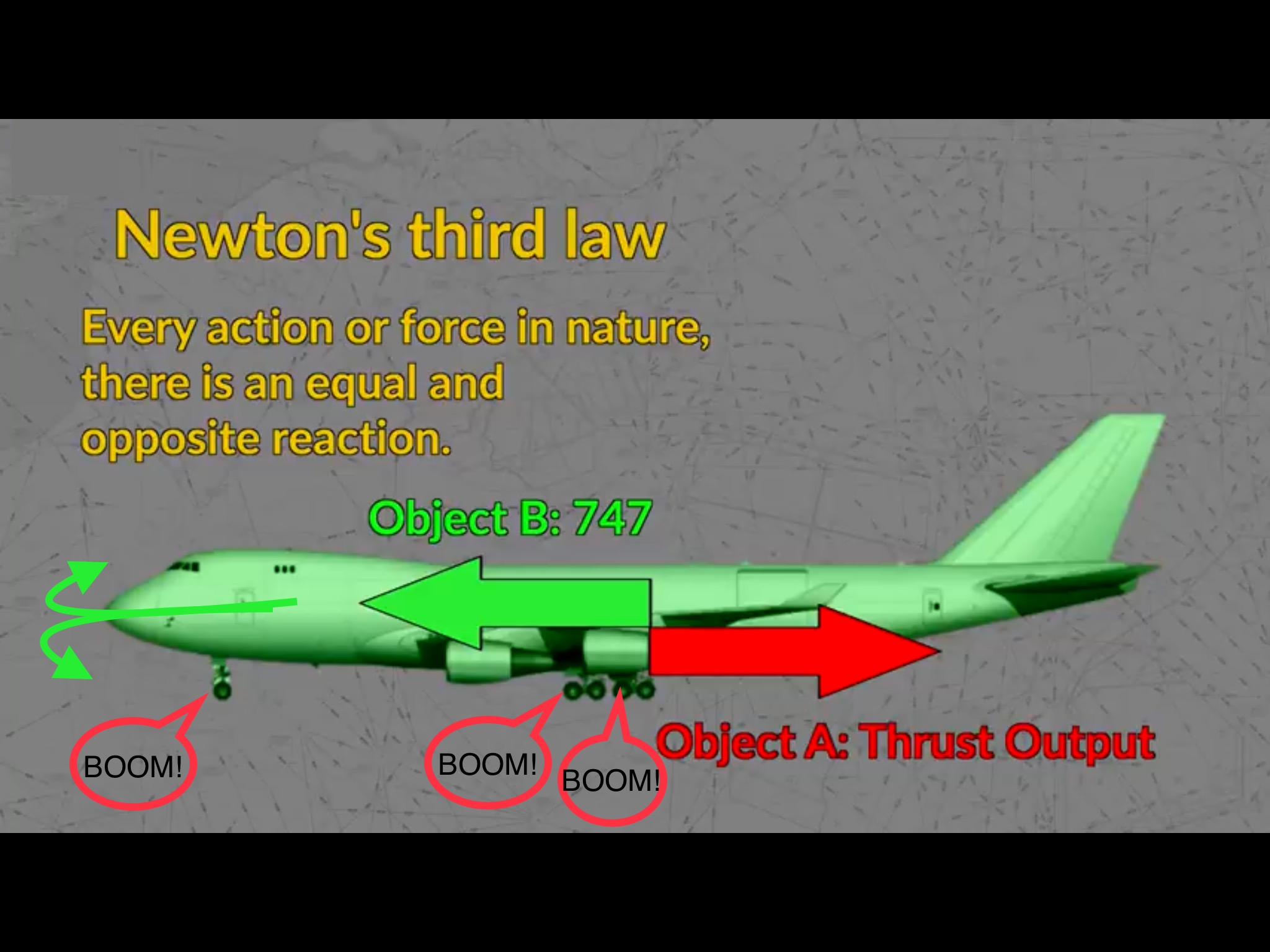 ... and there, beginning of the problem caused by the explosion / fire of the tires which would break the point of equilibrium. What could happen other than a sudden, unpredictable acceleration one way or the other? - there the engines are at the maximum thrust planned for take-off, and the plane would suddenly be released from its grip - there would then suddenly be a violent rotation on itself and / or a reversal of the plane then ? The thrust force exerted in one direction by the reactors, would provoke an uncontrollable reaction in the opposite direction, towards the direction of the breaking point of the equilibrium ”the force to be dissipated must be equal in the opposite direction”According to Newton. Pieces of tires could even be sucked up and swallowed by the reactors. The plane could then burn, leave the carpet in an unpredictable direction, the crazy zinc would probably get damaged in a rollover, and be uncontrollable anyway. The pilot would not have time to play on the flaps, the rudder, the speed or anything, the plane obviously not being designed for this kind of guidance / control.
1 x
Top

Ah, you're still on that plane PB, I thought it was concluded when I posted the video of the propeller gadget going up the conveyor belt, it has nothing to do with the plane but It had my brain turned around before I figured out how it works, sorry for the possible confusion.

For the plane, He takes off as if the conveyor belt did not exist.

Here is the trap:

a plane on a treadmill (which constantly cancels its ground speed) will he succeed in taking off?

This is not possible, the friction of the (free) wheels is negligible compared to the thrust of the reactors.
You might have already seen the video where a broom guy pulls a big plane, the wheels were definitely over-inflated but it gives an idea of ​​the size.

On the assumption that the carpet can simulate an infinite speed (strange to take into account the friction of the wheels while ignoring any physical stress on the carpet, but let's admit), then yes, the plane does not take off and even explodes (or at less comes out badly damaged):
The carpet races while trying to compensate for the advance of the plane causing the wheels to turn beyond their maximum speed, the wheels explode, the landing gear then sinks into the carpet moving at full speed and BOOM!

It seems to me that the Mythbusters dealt with PB in one episode.
2 x
Top

We are talking about physical principle here, why do you insist on the aspect of resistance and realization?

Of course, this is not feasible in practice except for a reduced model or possibly a private plane! But that's not the statement!

Petrus wrote:It seems to me that the Mythbusters dealt with PB in one episode.

Well, it's taking off ...but only because the reduced model is too light, fast lacks adhesion to the carpet and therefore the power passed in the wheels is quickly greatly exceeded by that of the propulsion?

In the case of the real test it is the same concern and a HUGE lack of regulation: a pick up that pulls the trick it is sure that it is well regulated !! It suffices that there is a small amount of speed delta for the lift to start to act and the grip is over and the balance is upset! The plane should have started by backing up, we can't see anything at all, it accelerates from the start ...

This mythbuster is therefore a half fake and lacks rigor: physically impossible but practically possible for questions of physical limits and realizing approximation!

So here I think it's time to say that EVERYONE IS RIGHT! (except Obamot, do not mess around anyway!

don't get angry!)
0 x
Do a image search or an text search - Netiquette of forum - Support the forum doing Useful shopping
Top

Small question ... How many take-off runways are there in the world that are oriented East take-off to the west ... At the level of the equator the plane takes off on a conveyor belt which cancels its speed of 465 m / s ....

0 x
The only thing safe in the future. It is that there may chance that it conforms to our expectations ...
Top

Macro, you forgot the trajectory of the earth, the sun, the galaxy!

We are much faster than that!

And this fucking plane ... it takes off anyway

1 x
The only thing safe in the future. It is that there may chance that it conforms to our expectations ...
Top
New topic Reply
86 messages