The tardigrade, extreme resistance and cryptobiosis

The Tardigrades, these microscopic and indestructible creatures able to withstand the extreme cold, total dehydration, radiation and even vacuum of space can apparently be revived after spending 30 frozen years. This is revealed by a recent experiment conducted by Japanese scientists.

The tardigrades, still dubbed "water bears", are tiny extremophiles living in the water that are able to withstand some of the worst environmental conditions. Recently, we learned that the secret of their invincibility lies largely in their genome of which nearly 18% is composed of the DNA of other organisms, such as plants, fungi, bacteria and viruses.

Before the new study conducted by cryobiologists at the National Polar Research Institute (NIPR) in Tokyo, the world record for "reviving" a frozen tardigrade was nine years. The samples were initially collected at the Showa station in Antarctica in November 1983. The researchers had to recover from the moss, which was found to contain two tardigrades (Acutuncus antarcticus) and one egg. Frozen tardigrades, with the foam sample, were brought back to Japan where they were stored for 30 years and six months at a temperature of -20 ° C.

Part of the secret of the extreme resistance of Tardigrade explained by Science: http://www.pourlascience.fr/ewb_pages/a ... -38361.php

Until now, it was thought that in the absence of water, the tardigrades survived thanks to a sugar, the trehalose. The latter is essential for many organisms such as yeast, Artemia (small crustaceans) or some nematodes to resist drying. Trehalose is believed to vitrify, preventing the organelles from breaking down. However, at present the presence of trehalose in tardigrades is not confirmed; some studies report low levels of this sugar in their bodies, while others do not detect it at all in the same species. Another mechanism would therefore be at work to protect tardigrades from desiccation.

Thomas Boothby and his colleagues started from the observation that if they were dried up too quickly, some species of tardigrades died, whereas in the case of a slower desiccation, they survived. They needed time, probably to produce a protective factor. However, there is a class of molecules, inherently disordered proteins (PID), which have the distinction, unlike most proteins, not having a fixed three-dimensional structure. In the tardigrade, they are called TDP (tardigrade-specific intrinsically disordered proteins). And during desiccation, TDPs are produced in large quantities in many species of tardigrades. Were these proteins the desired protective factor? Biologists have shown that this is the case. When they blocked the expression of these proteins, the tardigrades did not survive desiccation. They are therefore essential to their survival in this situation. However, it is likely that other mechanisms also come into play to protect the tardigrade: slowing of the metabolism, effective repair of the DNA which would have been damaged ...

A broadcast of the scientific method of France Culture was dedicated to him https://www.franceculture.fr/emissions/ ... is-costaud

It is a small animal with 8 paws and a trunk. He can live at the top of the Himalayas or tens of thousands of meters deep. It can survive worse than polar temperatures, close to absolute zero or by 150 degrees Celsius. Immerse it in a hypersaline solution, it survives. Take away oxygen, he survives. Expose it at massive doses of radiation, it survives. And then as long as you do, throw it into the empty space. Not even hurt...

The question of "disordered proteins" (what a funny name) is addressed towards the end of the show. 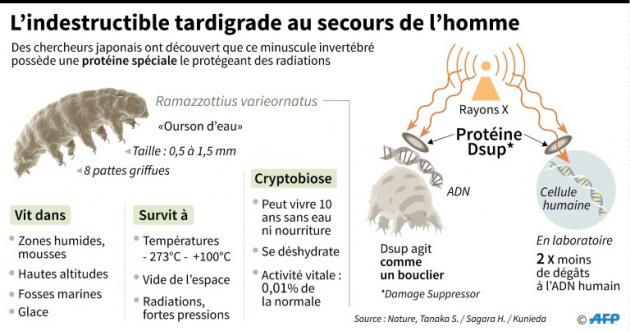 Geneticists have come to understand what makes the resistance of this microscopic and almost indestructible animal.

The article also quotes the Tardigrade ...

These nematodes had been frozen for tens of thousands of years. Russian scientists have managed to bring them back to life.

These microscopic worms have survived tens of thousands of years asleep in a layer of ice, or rather in the heart of Siberian permafrost, a permanently frozen ground. They are two different species since it is a Plappus and a Panagrolaimus. If they are really "resurrected", they would be the two oldest living animals in the world, according to the work of Russian researchers published in the journal Doklady Biological Sciences. For several years, these researchers collected no less than 300 samples from several locations and dating from several eras. As permafrost acts like a giant freezer, it contains tons of cryogenic organisms, says Science and the Future. They found Panagrolaimus in a 32.000-year-old squirrel nest and Plectus in a sample collected 3,5 meters deep in the vicinity of the Alazeya river in 2015. Thanks to Carbonne 14, they were able to determine that the latter was 41 years old.

Back in the laboratory, they warmed both worms up to a temperature of 20 C ° in a box kneaded with nutrients. After a few weeks, the researchers noticed that the critters had started moving and feeding.

For the moment, experts prefer not to advance on this discovery, arguing that it is not impossible that the samples were contaminated, either during harvest or in the laboratory, by more recent worms. By the team's own admission, this possibility cannot be ruled out, but it nevertheless considers it unlikely due to the sterile environment of the research laboratories. They also indicate that no other modern organism has been found at the depth at which they discovered the animals. The deep layers are "cemented by ice" preventing migration of nematodes. "The depth of the seasonal thaw in the regions studied reaches 80 cm and never exceeds 1,5 m, even 9.000 years earlier during the Holocene thermal maximum. The age of living organisms in these strata therefore corresponds to the age sedimentary rocks "add the authors cited by Sciences et Avenir.

If true, such a discovery would be dramatic since no other multicellular organism ever came back to life after being frozen for such a long time.

An extraordinary ability to resist frost

Bacteria have been brought back to life after being frozen for tens of millions of years. There are also tardigrades, tiny multicellular organisms that look like cubs.

The latter can survive in very hostile environments such as -272 temperatures at + 150 ° C or space vacuum. They could also be awake after 30 years of freezing, but they did not survive long.

It was already known that the nematodes which colonized all the surfaces of the Earth could very well resist freezing thanks to a state of cryptobiosis, a very slow state of life, and a clever organization of ice crystals and the secretion of a sweet liquid. These last two adaptations protect their cells. Because what often "kills" frozen living beings is the destruction of tissues following the freezing of the water contained in them.

According to Russian researchers, these "roundworms" possess a number of adaptive mechanisms that can provide new scientific insights. They dream of breakthroughs in medicine or astrobiology, the branch of science that studies the origin of life in the universe.

However, there is no need to go defrost all cryopreserved people. Because human beings have little to do with these verses. If one day we can bring these people back to life, which is not excluded, we probably will not have to discover it. Indeed, if there are similarities at the cellular and genetic level, we are also much more complex. For example, worms do not have brains. To freeze and bring back to life an organ like this is a whole other pair of sleeves.

A poor little tardigrade stuck (by the back) to a bubble and condemned to turn in circles ...

Fortunately, he can "die" while the bubble evaporates!

An amphibious robot jumps like a water spider
562 views

Science often uses biomimicry to find solutions, as in the case of this little robot inspired by the water spider. Very light, it is able to move on a liquid without flowing, as can be seen during this video.

The tardigrades (Tardigrada) are incredible extremophile creatures that can withstand extreme conditions, even space vacuum. In February 2019, an Israeli space probe containing a population of tardigrades was sent to the moon, but its landing did not go as planned. However, the creatures, also known as "water bears", probably survived the crash as well as extreme lunar conditions.

Yes, it is therefore very likely that tardigrades are walking quietly on the lunar soil at the present time. This makes these animals the first terrestrial living beings that colonized the Moon!

The 11 April 2019, the Israeli spacecraft Beresheet crashed on the moon during an unsuccessful landing attempt. In doing so, he may have sown thousands of dehydrated tardigrades on the lunar surface, reports Wired.

Beresheet was a robotic lander developed by a team of Israeli engineers and technicians, collaborating in the Israeli company SpaceIL, which was founded to try to win the Google Lunar X Prize. Although it did not carry astronauts, it contained human DNA samples as well as the aforementioned tardigrades.

The gerris is not a spider. It is a hymenopteran (an insect) of the Gerridae family, suborder bugs. In addition, she flies.
By cons, this is a water spider:

0 x
“It is better to mobilize your intelligence on bullshit than to mobilize your bullshit on intelligent things. (J.Rouxel)
"By definition the cause is the product of the effect". (Tryphion)
"360 / 000 / 0,5 is 100 million and not 72 million" (AVC)
Top

Users browsing this forum : No registered users and 12 guests