The research team also noticed that the errors in the mechanism did not come from geometric miscalculations, but simply from geocentrism, the Greeks' flawed theory that the Earth was at the center. Because of this bad premise, the movement of bodies was much more difficult to predict. But the geometric calculations themselves were very good.

Sacred feat when you start with such a handicap, geocentrism.

When I discovered the existence of this machine about fifteen years ago, I was amazed. Such techno before JC, it's extraordinary, but why was it never mentioned when I was a student, in history or in Latin / Greek class that I did some time. Because it does change a little the conception of the world to know its existence.

We knew the brilliant knowledge in math and astronomy of ancient Greece, scientists / philosophers of the time had even calculated the earth-sun distance, but not (at least as far as I'm concerned) that such a device could be built at the time. Some attribute it to Archimedes. I do not know if it is him but very possible because Amha the guy who did that or was able to do that at the time must have had a phenomenal IQ compared to his contemporaries. This device indeed seems an exception, I am not aware of any other machine closely or remotely resembling this one.

The Roman civilization, less brilliant in theory but more technological than Greece (see for example their "power station" of 52 KW of barbegal, but much later) could have kept or developed such machines. But with the rise of Christianity and the decline of the Roman Empire, with the regression both in ideas and in techniques that led us to the Middle Ages, backward compared to ancient Greece, it is centuries or even a millennium lost compared to what a linear progression of Greco-Roman civilization could have brought.
We are not remaking history, but with this machine, that's what I said to myself.
0 x
Top

Well, false info: No, scientists have not unlocked the secrets of the mysterious Antikythera machine https://www.sciencesetavenir.fr/archeo- ... ere_152633
0 x
Top

She is also the author of a podcast, In Tenebris, which aims to explore, from a scientific perspective, apparently phenomena paranormal.

izentrop wrote:Well, false info: No, scientists have not unlocked the secrets of the mysterious Antikythera machine https://www.sciencesetavenir.fr/archeo- ... ere_152633

They say that at worst it would be a clock giving the position of the moon and the sun, which is already a feat for the time.
What is amazing is that there is no equivalent. It is not the handyman in his corner who could do that, and the "scientists" of the time were nevertheless known notables, this machine should have aroused the interest of the powerful and / or rich to have it too one at home.

So there is a little mystery. Surely a farce of an advanced alien civilization.

Exnihiloest wrote:So there is a little mystery. Surely a farce of an advanced alien civilization.

There are still writings.
it must have been awfully complicated and imprecise to make this object with the prerequisite of the earth in the middle of the universe

The Ancients saw the sky (the cosmos) as different spheres interlocking with each other. The Earth is surrounded by the 4 elements of Aristotle: earth, air, water and fire, then the lunar world and the planets known at the time (including the Sun) and beyond, the sphere of the fixed ones. The Greeks knew about the movements in the sky and the movement of the planets.

The complexity of the design - over thirty cogwheels - and the fact that it testifies to the state of the art of astronomy at the time shows the genius of its designers. This machine, despite its great internal complexity, has several planetary gears. It is assumed that it was relatively simple to use.

All the operator had to do was turn a crank until one of the dials displayed a desired position (day, sun-moon alignment, etc.) and the operator could directly read the correspondences in other cycles on the other dials. . The mechanism takes into account different calendars (lunar, lunisolar, solar,…). We find there :

A metonic cycle of 235 lunar synodic months (19-year lunisolar) which also takes into account the Games of the time (Olympic, etc.)
A zodiacal dial based on an Egyptian calendar
A dial linked to the Saros (223 lunations) important for eclipses.
... https://saf-astronomie.fr/machine_anticythere/

izentrop wrote:...
it must have been awfully complicated and imprecise to make this object with the prerequisite of the earth in the middle of the universe ...

Yes. This is where I would love to have time tourism invented. Going back to ancient Greece to talk to the inventor would interest me more than taking a moon tour with SpaceX!
It is thanks to discoveries, inventions, innovations and progress in general, including social ones, that one has the feeling of being human and of belonging to a particular species. Biological Nature, blah; a must, of course, but then put at our service because we still depend on it.
Nature has invented a lot of things, but by chance, and not the wheel. It was man who invented it. The arguables will tell me that nature invented man, therefore the wheel, and they would be wrong. The difference between her and us is consciousness. Nature does not invent anything because it does not conceptualize anything at all.
Sorry for this little digression ...

In the (fascinating) documentary we see a watchmaker making one of the cogwheels in bronze. He explains quietly and shows us with a hardened steel triangular needle file, how to make the teeth. Okay, but at the time ... what equipment did they have to file so efficiently, so precisely?
0 x
Obamot wrote: Apologize for all the wrong you've done! Apologize here right away — especially to Christophe — and try not to do it again. It's not a “gag”. It's your only chance. If you wait too long you will pay a very, very high price later, a price you don't even suspect.
Top 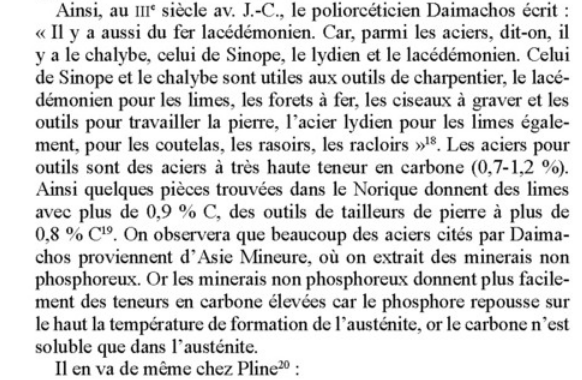 If it's true, then it's plausible.
0 x
Obamot wrote: Apologize for all the wrong you've done! Apologize here right away — especially to Christophe — and try not to do it again. It's not a “gag”. It's your only chance. If you wait too long you will pay a very, very high price later, a price you don't even suspect.
Top