Besides, some scientist speaks of a long-term disappearance of the little toe.


Much faster, the disappearance of wisdom teeth, well underway for a few thousand years, and certain for the future, since we no longer chew raw and hard roots !!

See Santé Mag on today's A5, December 2, for scientific proof of this ongoing and not creationist evolution !!

We will no longer die of famines, with wisdom teeth to chew the hard raw roots that sometimes saved our ancestors, so that we still exist !!
We chewed them adults, to give them softened to our young children !!
0 x
Top

Very effective in avoiding diseases like AIDS, at least for women !!

Findings from a first-of-its-kind study by Indiana University researchers confirm anecdotal evidence that exercise - absent sex or fantasies - can lead to female orgasm.

While the findings are new, reports of this phenomenon, sometimes called "coregasm" because of its association with exercises for core abdominal muscles, have circulated in the media for years, said Debby Herbenick, co-director of the Center for Sexual Health Promotion in IU's School of Health, Physical Education and Recreation. In addition to being a researcher, Herbenick is a widely read advice columnist and book author.

"The most common exercises associated with exercise-induced orgasm were abdominal exercises, climbing poles or ropes, biking / spinning and weight lifting," Herbenick said. "These data are interesting because they suggest that orgasm is not necessarily a sexual event, and they may also teach us more about the bodily processes underlying women's experiences of orgasm."

The findings are published in a special issue of Sexual and Relationship Therapy, a leading peer-reviewed journal in the area of ​​sex therapy and sexual health. Co-author is J. Dennis Fortenberry, MD, professor at the IU School of Medicine and Center for Sexual Health Promotion affiliate.

The results are based on surveys administered online to 124 women who reported experiencing exercise-induced orgasms (EIO) and 246 women who experienced exercise-induced sexual pleasure (EISP). The women ranged in age from 18 to 63. Most were in a relationship or married, and about 69 percent identified themselves as heterosexual.

Here are some key findings:

About 40 percent of women who had experienced EIO and EISP had done so on more than 10 occasions.
Most of the women in the EIO group reported feeling some degree of self-consciousness when exercising in public places, with about 20 percent reporting they could not control their experience.
Most women reporting EIO said they were not fantasizing sexually or thinking about anyone they were attracted to during their experiences.
Various types of physical exercise were associated with EIO and EISP. Of the EIO group, 51.4 percent reported experiencing an orgasm in connection with abdominal exercises within the previous 90 days. Others reported experiencing orgasm in connection to such exercises as weight lifting (26.5 percent), yoga (20 percent), bicycling (15.

, running (13.2 percent) and walking / hiking (9.6 percent).
In open-ended responses, ab exercises were particularly associated with the "captain's chair," which consists of a rack with padded arm rests and back support that allows the legs to hang free. The goal is to repeatedly lift the knees toward the chest or toward a 90-degree angle with the body.

Herbenick said that the mechanisms behind exercise-induced orgasm and exercise-induced sexual pleasure remain unclear and, in future research, they hope to learn more about triggers for both. She also said that study findings may help women who experience EIO / EISP feel more normal about their experiences or put them into context.

Herbenick cautioned that it is not yet known whether such exercises can improve women's sexual experiences.

"It may be that exercise - which is already known to have significant benefits to health and well-being - has the potential to enhance women's sexual lives as well."

The study did not determine how common it is for women to experience exercise-induced orgasm or exercise-induced sexual pleasure. But the authors note that it took only five weeks to recruit the 370 women who experienced the phenomenon, suggesting it is not rare.

"Magazines and blogs have long highlighted cases of what they sometimes call 'coregasms,'" Herbenick said. "But aside from early reports by Kinsey and colleagues, this is an area of ​​women's sexual health research that has been largely ignored over the past six decades."

dedeleco wrote:Very effective in avoiding diseases like AIDS, at least for women !!

dedeleco wrote:Very effective in avoiding diseases like AIDS, at least for women !!

0 x
Reason is the madness of the strongest. The reason for the less strong it is madness.
[Eugène Ionesco]
http://www.editions-harmattan.fr/index. ... te&no=4132
Top

the widow's wrist is also effective against SID (a)!
0 x
Top

A female orgasm on demand "olfactory" with a mushroom?

The stages of female orgasm: 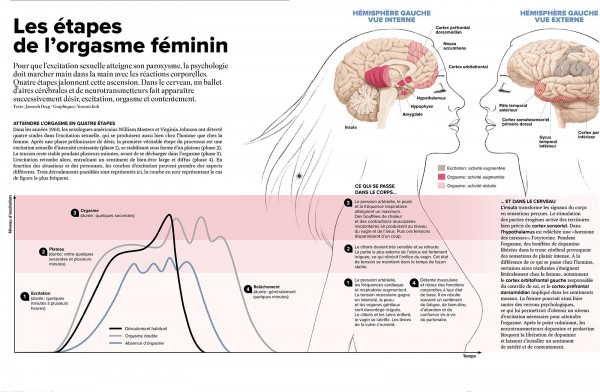 The video on the Clitoris that is talking about it right now:

I would rather say the absence of orgasm ... And besides ... In men it leads to the same results ....

Abstinence is by far the worst perversion ... (It's not mine)

Let us use, abuse without counting the possibilities of giving us pleasure that are given to us ... (between consenting people, of course) ...
0 x
The only thing safe in the future. It is that there may chance that it conforms to our expectations ...
Top

A nice word from Macro that!

ps: the video is still much less interesting than the reports and info that were given above on this subject