The car of the future

To the whole team, analysis of Elec's suggestions,

Is the electric car with reduced autonomy powered by solar panels realistic?

This message is replaced by the corrigendum a few pages later.

The MATHIS 333, a true wonder, designed by people who knew what energy efficiency means ... 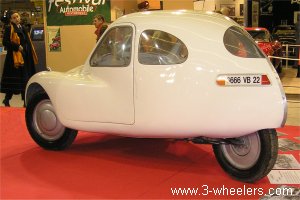 It's here :
http://www.3wheelers.com/mathis.html
Must say that at the time, gasoline was scarce ...

To be good today for designing cars (or light planes!), A small or even a big return to the archives would not hurt ...

The TGV at 200 km / h would not be that bad for those in a hurry.
On the Paris-Nantes or Paris-Rennes routes, the TGV justifies its name only between Paris and Le Mans, roughly 190 km.
Going to 200 km / h would only "lose" 20 minutes. If we wanted to limit the lengthening of the journey to 15 minutes corresponding to the delay generally observed to start a meeting (!), We would have to walk at a small 230 km / h and that would consume 2 times less energy on the TGV part (2,6 , 200 times less energy at XNUMX km: h).

Yes, but then, what will become of the ultra-booked businessmen, the only ones who could have to complain about the thing, the others who walk around having by definition all their time!
To answer it is enough to know that they are traveling with their laptops on their knees and digging up their files. For many of them, this is the only time they can work hard! The 20 or 15 minutes therefore do not correspond to lost time ... For those who are so slammed that they sleep, it is also all good for them!

It is clear that this question will one day come to the fore because numbers and the laws of physics are stubborn.

But there is a big problem. If we decide to drive at this reasonable speed of 200 km / h, that's all TGV system collapsing. And that Sir, it is to deny the greatness of France, and it will not happen like that !!

Indeed, to run trains at 200 km / h, there is no need for the beautiful and expensive infrastructure special TGV that has been put in place. Arrangements on existing lines, or new lines that do not require as many constraints could be suitable. Other rolling stock (perhaps pendulum) designed for another specification would probably be more sober and less expensive.

TGVs do not run at night, but the tracks are occupied by maintenance teams who repair the damage during the day. Trains less "aggressive" for their environment would reduce maintenance costs and free up the tracks at night to run freight trains and reduce the number of trucks.

All this energy saved, this money saved would make it possible to lower the price of tickets and make the train competitive with respect to the car and to "put the package" on the TER which are seriously running out of steam.

Wouldn't life be beautiful?
We call this a virtuous spiral ......

PS for Elec: Do not confuse the calculations of power and those of energy. Reread slide 16 of the slideshow well and you will see that there is no typo to correct. To obtain a power of 51 kW, 340 m2 of well-exposed solar panels are required. Michel KIEFFER has exaggerated a little, because the installed power (maximum) on a car is never used. We are going to say that with half of it we have a fast cruise, which still gives us 170 m2 ...

When your value of 20 m2 per vehicle is meaningless if it is not accompanied by many other values ​​related to the type of vehicle and its type of use. For example, the OSCAR project vehicle would be satisfied with 10 m2 of PV panels for 20000 km / year.
See here : http://www.akasol.de/downloads/info/pdf/poster_fr.pdf.
0 x
In terms of the future, it is not to foresee it, but to enable it (Antoine de Saint Exupery)
Top

Michel Kieffer wrote: with 30m2 of solar panels, you can drive 136 km / day (...))
The error is still possible, I check all this in the coming days.
A big thank you to Elec for his suggestions and good checks to you
Michel
PS for Elec: please validate the information "*" above /

On the phone, we had arrived at around 24m2, instead of the 340m2 initially indicated on the BD.

The 30 m2 seem to me to be in the right orders of magnitude.
I will perform the calculations again in the next few days, I will keep you posted.

if we still install our 30m2 of solar panels, it is quite possible that the CO2 balance is better by keeping the car "fossil"


There I think it is wrong.
The Energy Payback Time is 2 years and the lifespan of PV panels is 25 years. Even if the electricity which was used to produce the panels is 100% coal, the CO2 balance remains largely better with the EV than with the petrol thermal car or bio-agro-fuel.

yes it is possible provided you do not take unfavorable assumptions: it is obvious that an urban electric EV whose objective would be to be recharged in solar would not weigh 1500 kg if not, of course, that does not.
look rather HERE
the dagne vehicle can travel the 40miles daily (64kms) of an American with 4m2 of solar panels

in the Californian sun, I concede.
but we have here a very good example of a vehicle designed to be energy efficient while remaining pleasant in speed and acceleration.

Dirk,
I based my calculation on an EV that consumes 20kWh / 100km (equivalent to the energy content of 2 liters of petrol).
With a consumption equivalent to 1 liter per 100km, it is no longer 24m2 but 12m2 (with average annual sunshine in France).
With the average annual sunshine in California, it's less than 12m2.
And with hyper-efficient EV, as you indicate, it's even less than 12m2.
With a micro wind turbine, you can also recharge the battery.


Very interesting the Dagne ... Is it marketed?

I also think that the search for energy efficiency is a priority: the energy that we do not consume is the one that is the easiest to replace.
That said, research into performance, comfort and design is also essential because a poorly performing and naughty vehicle has no chance of entering the market ... and is therefore completely ineffective.
Personally, I find the design of the Dagne attractive. performances:

1) Michel Kieffer, not verified your calculations but a priori I agree but I would have had another approach

To cover 20 km per year would therefore require 000 m² (at least). The approach is different but the order of magnitude identical.

2) Elec is certainly environmentally friendly (but it can be argued: especially at the gray energy level of batteries far from 20 years old) ... but 30 m² of panels cost, say at 6 € (including tax) the WC 27 € without the essential "buffer" batteries. It represents how many km traveled?

At a rate of 20 km per year, that's still almost 000 years of "fuel"! Obviously this does not take into account the evolution of energy costs ...

3) Then and above all, driving on PV or even electric is fine, but the economic calculation is biased because electric kWh are not subject to the Consumption Tax: we therefore often compare a kWh taxed at 60% + VAT and one that is only by VAT ...

Let’s be sure that electric kWh for road use will be taxed at the same height as petroleum kWh when EVs will no longer be marginal ... if one day they are no longer ...

This is surely one of the reasons for the State not to favor the development of EVs (look at the farce that was the C3 GNV)!

The State subsidizes the purchase of PV electricity can be to avoid the diversion of tax entry to road destination ... Am I wrong?
0 x
Do a image search or an text search - Netiquette of forum - Support the forum doing Useful shopping
Top

But with thin film: division by 3 of kWh PV (nanosolar etc.)

Conclusion, in the USA, where petrol is low taxed, the petrol car remains slightly cheaper than the photovoltaic electric car (conventional PV).
This is no longer true in Europe with $ 16 per 100km for gasoline instead of $ 8 in the USA. We are saying that taxing fossil fuels is really good for bringing out sustainable solutions.

Normally, by respecting the reality of the laws of physics, you should end up with the real problem which is:
To be or not to be electric electric, That Is not the question!

Elec juggles with the numbers, he announces 20 m2 but he agrees with 10 and he would accept 30. He is probably thinking that he will manage to pack up his spare batteries anyway.

The reality of the figures is much more trivial, it is perfectly exposed in the comics of Michel KIEFFER,: we must divide by three or by 4 the amount of energy that we devote to ensure our precious individual mobility, and it is perfectly feasible , right now.
The choices to be made so that this expenditure of energy is the least toxic possible are not simple, but they are of "second order".

It is certain that today, the extreme penalty imposed by the mass of batteries is reflected, for equal payload, by a greater energy requirement. Here we come up against the extraordinary energy density of fossil fuels.

This puts a layer on the balance more than mixed use of electricity, in terms of energy efficiency and waste (CO2 and nuclear) and does not give electric propulsion the advantages it is in a good tone to recognize him.
This is true today and for a long time to come if we place ourselves in the perspective of a “general public” industrial offer.

But things can change if the ratios € / kwh and kg / kwh are reduced very significantly .....

In the meantime, we quickly need a petrol car at 2 and then 1 liter per 100 km.
0 x
In terms of the future, it is not to foresee it, but to enable it (Antoine de Saint Exupery)
Top

RIAZ wrote: Elec juggles the numbers, he announces 20 m2 but he agrees with 10 and he would accept 30.

It is the orders of magnitude that matter.
30 m2 and 340 m2 are no longer the same order of magnitude.

Then, 20 or 30m2, it all depends on the starting hypothesis, but it's ok on the order of magnitude level.

A PV / micro-wind hybrid system is preferable to a 100% PV system. This allows you to recharge your battery with renewable energy more reliably for simple statistical reasons (probability of having wind or sun).

the extreme penalty imposed by the mass of batteries

This is not at all the case with an infrastructure for recharging and exchanging batteries, hence the importance of setting up this infrastructure.


We have no time to waste with half or false solutions. We need to get out of fossil fuels and the heat engine as quickly as possible, and its performance is and will remain poor.
Last edited by Elec the 04 / 01 / 09, 00: 00, 2 edited once.
0 x
Top

Elec wrote:Dirk,
I based my calculation on an EV that consumes 20kWh / 100km (equivalent to the energy content of 2 liters of petrol).

You are really angry with the numbers Elec.
20 kWh / 100 km does not correspond to 2 liters of petrol but to SIX.

On the other hand, a vehicle which is 20 kwk / 100 passes directly from the design office to the museum.
0 x
In terms of the future, it is not to foresee it, but to enable it (Antoine de Saint Exupery)
Top

Users browsing this forum : No registered users and 50 guests