Tribute to a deceased great man

Tribute to a deceased great man

Russia: Moscow bids farewell to Mikhail Gorbachev, without pomp and without Putin 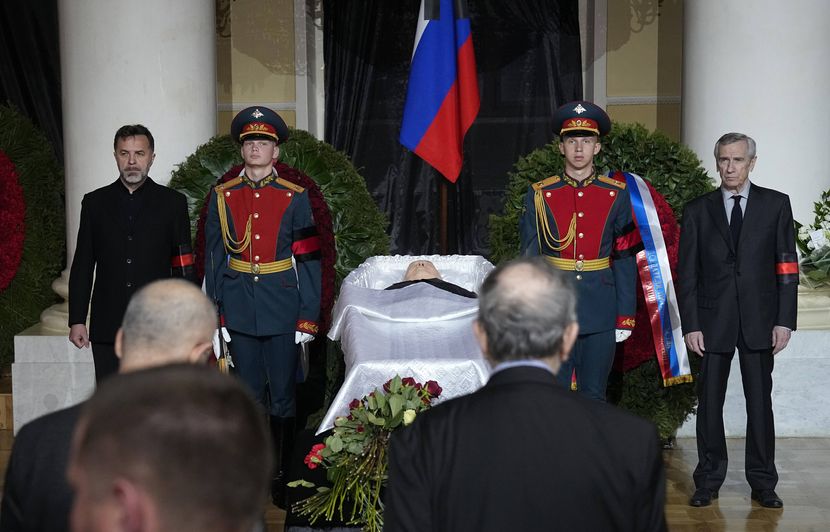 He was one of the great political figures of the XNUMXth century. This Saturday, hundreds of Russians bid farewell to the last leader of the Soviet Union Mikhail Gorbachev, during a funeral without fuss marked by the absence of President Vladimir Putin.

Gorbachev died Tuesday evening at the age of 91 following a “long and serious illness”, according to the hospital where he was treated. He made history by precipitating, in spite of himself, the disappearance of the Soviet empire in 1991, while he was trying to save it with democratic and economic reforms, thus ending the Cold War.
No national day of mourning

Hailed in the West as a man of peace, Gorbachev is seen by many in Russia as responsible for Moscow's geopolitical downgrade and the years of political and economic crisis that followed the fall of the USSR. A sign of disaffection from Russian power, no day of national mourning has been announced. Above all, the funeral took place in the absence of Vladimir Putin, justified by the Kremlin by a busy "schedule".

A few hundred people nevertheless lined up in the morning in front of the House of Trade Unions in Moscow, where Gorbachev's coffin was on display, to bid him farewell. Inside, a portrait of the former leader sat next to the open coffin, near which Gorbachev's daughter, Irina, sat. Two uniformed guards were posted on either side of the coffin, while visitors laid flowers before bowing respectfully before the body.
No great world leader

But in the midst of an open crisis between Moscow and the West because of the conflict in Ukraine, no major world leader was present at the ceremony. Hungarian nationalist Prime Minister Viktor Orban, close to the Kremlin, is the only foreign leader whose arrival was announced on Saturday, at the last moment. According to the Russian presidency, no meeting is planned with Vladimir Putin.

The House of Trade Unions, where Gorbachev's coffin is displayed, is an emblematic place where the remains of several leaders of the USSR were presented, including that of Joseph Stalin in 1953. After this ceremony, Gorbachev must be buried in the cemetery of Novodevichy, next to his wife Raïssa Gorbatcheva, who died in 1999 and to whom he was very close.
Putin's Weak Tribute

If he did not attend the funeral on Saturday, Vladimir Putin discreetly went to the Central Clinical Hospital (TSKB) in Moscow on Thursday, where Gorbachev died, to lay a bouquet of red roses near the coffin. In his message of condolence, he paid minimal homage to Gorbachev: in a neutral tone, he noted that he had had "a great influence on the history of the world" and had "sought to propose his own solutions to the problems” of the USSR.

The relationship between the two men was complex, oscillating between marks of esteem and mutual reproaches, before giving way to cordial indifference. By contrast, Western capitals, from Washington to Berlin, via Paris and Rome, warmly celebrated the memory of Gorbachev, hailed for having worked for East-West rapprochement and a reduction in nuclear arsenals, which had earned him 1990 the Nobel Peace Prize.
The gravedigger of Soviet power

Germany, whose reunification was made possible by the fall of the Berlin Wall and the USSR, announced that the flags would be at half mast in the German capital on Saturday. But, in Russia, Gorbachev is perceived by many as the gravedigger of the great Soviet power which rivaled America and whose end, considered humiliating, gave way to a decade of crises and violence.

Boris Yeltsin, the first president of Russia in power during the years of painful transition to a market economy, and who had appointed Vladimir Putin as his successor, was entitled to strong honors on his death in 2007. The Kremlin declared a day of national mourning and organized an official funeral. In the presence of Vladimir Putin and Mikhail Gorbachev. I have in our room pieces of the Berlin Wall that we went to pick up not even a year after it fell.

2 x
Obamot wrote: Apologize for all the wrong you've done! Apologize here right away — especially to Christophe — and try not to do it again. It's not a “gag”. It's your only chance. If you wait too long you will pay a very, very high price later, a price you don't even suspect.
Top
New topic Reply
1 message • Page 1 on 1

Users browsing this forum : No registered users and 11 guests