Technologies and solutions for ecology and energy. Home, works, heating and insulation, wood and pellets, solar and wind power, works, DIY and construction, environment, health and pollution, finance and green or alternative economies

Sign up to participate, remove ads and get all the features of forums. It's free, you will learn a lot and you will make serious savings!

Following the various positions taken by France Evening, in particular this article on the bogus Meta analysis study on HCQ in the Covid crisis, I dare to ask the question and the debate on press freedom in France ...the separation of 2 new powers of some sort: the media and multinationals.

Extract from the article in question: 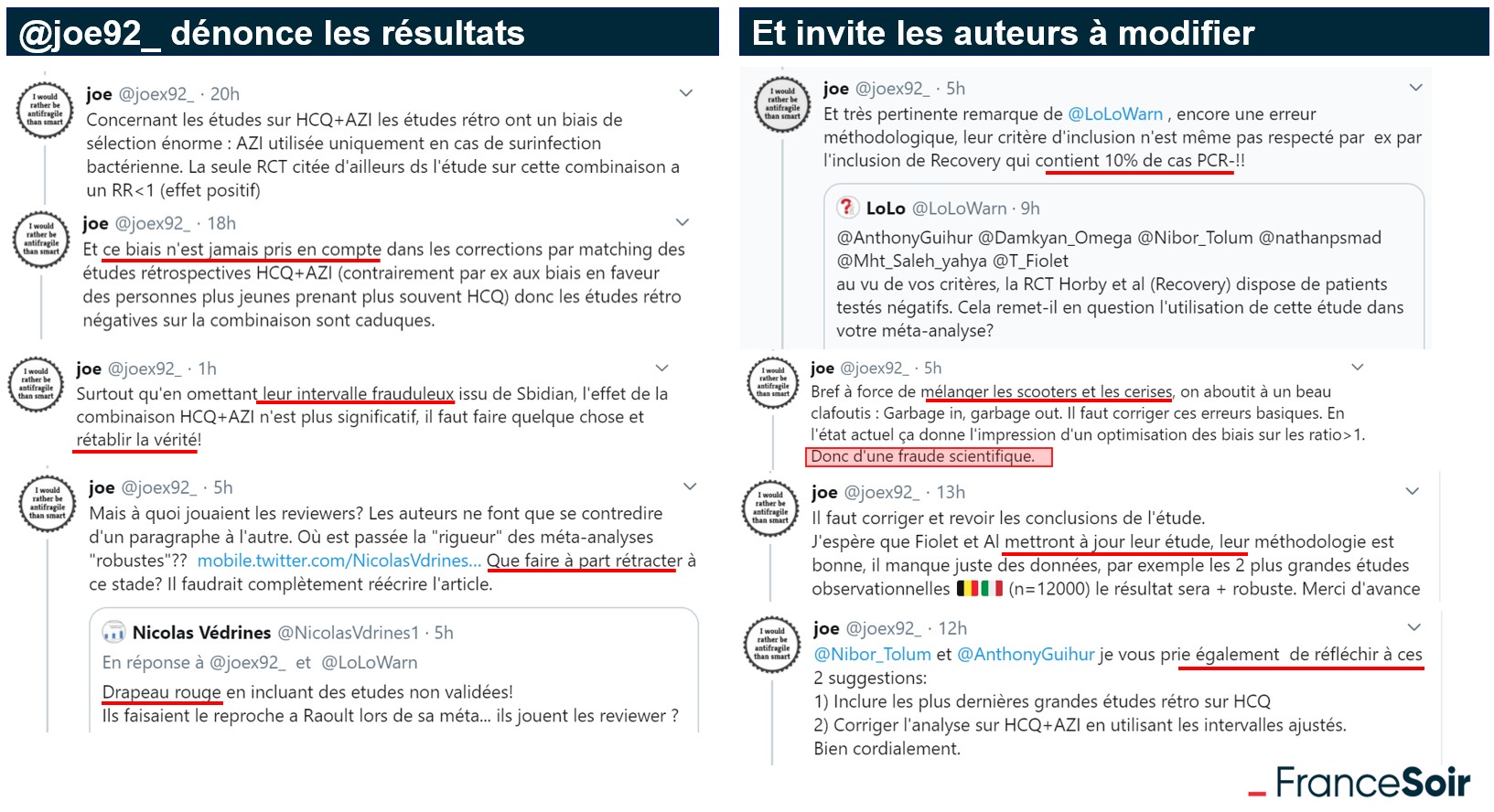 A first observation: FranceSoir has been bankrupt since 2019, they no longer have an employee but they continue (certainly voluntarily by former employees?) to feed their site. Articles often go against Mass Media ...

France-Soir is a former French general daily newspaper created in 1944 which reached its peak in the 1950s. It ceased to be published in paper version in 2011, then reappeared in digital version in 2013. The site continues to publish content even after all of its journalists were fired for economic reasons in 2019.

The facts then: FranceSoir writes articles that do not go in the direction of the official versions ...

Already in June ... FranceSoir took part in the Covid crisis and took a slap from NewsGuard https://www.newsguardtech.com/wp-conten ... sion-1.pdf

In June 2020, NewsGuard downgraded the France-Soir media, in particular for having published “unfounded allegations of the COVID-19 pandemic” 48. In response, Xavier Azalbert publishes an article titled: "NewsGuard a site that practices selective and targeted disinformation for commercial purposes?" ". An announcement from France-Soir at the end of July 2020 on the epidemic in Mayenne is also contradicted by the CheckNews service of Liberation; the “volunteer” author of the France-Soir column admits his mistake.

I haven't found the article in question so I would have a hard time analyzing this case, but here is the reaction: http://www.francesoir.fr/societe-econom ... ion-ciblee

As if poverty, the absence of money, of the need for results, of economic pressure ... made it possible to speak more freely ...(well, how good this idea is ...

Or has FranceSoir shifted to the dark side? That of the "great conspiracy" ... in order to comb the most lost in our society?

But for what purpose? If not that of discrediting oneself and ending up dying for good? And sorry but the quality of their analyzes does not allow AMHA to reach the lost ones (or else it is that we are a lot to be lost ...

There you have it, the debate on the independence of the media and their relationship to money and power is open ... and don't call me a conspirator just because I asked this question! That would be very low on your part!

ps: I would like to know what NewsGuard thinks of this forum !

Ah well apart from France Soir and Éconologie I do not know of any other general media (I exclude personal blogs) which makes hear another story than that of the media under orders.

This gives the opportunity to come back to an excellent article that they released and which is a small nugget about a subject that we had already talked about and which can be summed up by Clinical trial and treatment: what ethics in a health emergency?

At the time I had already noted (without knowing that it was the gang of zigotos) that a few years ago during the Ebola epidemic certain treatments had been administered in emergency, without previous proof of their superiority. and without a placebo group.

The newspaper France Soir published an article which takes up this situation in a tasty article which reveals that at the time the Rex gang readily did without randomized trials and co.

The question that may arise is why these 2 different attitudes?
0 x
The vegetable gardens - Youtube channel
Haut

in addition, it seems to me that it has been explained several times: if the disease is serious, we do not run a great risk in trying something, that said, the benefit must nevertheless be significant for us to consider that 'you don't need a randomized trial.

If the effects are small (both disease and drug amelioration) then confounding factors are much more complicated to consider, and more careful protocols are needed.

There is actually no need for double-blind tests to find that exposure to the sun causes sunburn ...
0 x
Haut

The question is not there. As usual, the trolls are off topic and refocus the debate on their false polemics, to keep us away from interesting questions (raised in this case by this thread ...)!

Anyway, 'experience'France Evening '”Asks real questions, especially around:
- media (mainstream) and
- the wave of what is called “fake news”.
- journalistic ethics,
- manipulation of the media by political and financial forces,
- the right to information (... the duty to inform).
- of what is called “freedom of press”(If it still exists):
- their connection with all spheres of influence, lobbyists, religious spheres, the world of research, sport etc.
- funding of the media VS their probity.
(Not exhaustive)

Xavier AZALBERT was Honorary Chairman of the company “FRANCE SOIR“. He seems to have become “Director of Publication”

It is obviously someone who is not “in need”: https://dirigeants.bfmtv.com/Xavier-AZALBERT-4509894/
Is he some kind of philanthropist?

We would have to take a closer look at the various contents of the ACTUEL newspaper to get a more precise idea ... But journalists (whether they are in charge or not) follow rules of ethics (at least in front for the most corrupt ) so I doubt that they could fall into conspiracy theses so easily ...

On the other hand, we should see what is cataloged as “conspiratorial” and what is not, it is practical enough to discredit relevant sources a little quickly ... In principle, the work of journalism is a job of investigation .. Except that for decades, this work has been subcontracted by “press agencies” ... There are only the great reporters and special envoys ... They are rare and handpicked ... L he “conspiratorial” approach has little place in this universe controlled by billionaires in peacetime, and ... by ... the army in wartime (he makes it known ...)

It is debatable, but we have the example of 9/11 where the American administration proclaimed with all its might that those who were behind the attacks, it was Al Qaeda, except that thanks to what transpired from the war in Syria since, we have become certain that:
- From the very beginning of the war, the so-called “rebels” were radical Islamists linked to Al Qaeda (HTS and Daesh).
- it is therefore by no means a civil war.
- the USA sponsored these terrorist groups (called “rebels”) they don't even hide from them anymore ...

But even today in the US, Re-Open 9/11 is still considered “conspiracy theory” type poison.

There are other examples where so-called “followers of a conspiracy theory”Are not:“whistleblowers”(Whistleblowers)

If the case fatality rate of covid had been 25 to 90%, would we therefore have used hydroxychloroquine without any problem?
0 x
The vegetable gardens - Youtube channel
Haut

If the case fatality rate of covid had been 25 to 90%, would we therefore have used hydroxychloroquine without any problem?

Christophe wrote:I haven't found the article in question so I would have a hard time analyzing this case, but here is the reaction: http://www.francesoir.fr/societe-econom ... ion-ciblee

And from what I saw

+ "Inviting each other with Silvano Trotta" doesn't really inspire me confidence either.

Christophe wrote:Or has FranceSoir shifted to the dark side? That of the "great conspiracy" ... in order to comb the most lost in our society?

Whoever gets caught by a Fakenews is not necessarily a lost one, I think there is no correlation elsewhere. Often we get tricked because we think backwards: "I have an idea on the question ... Oh hey, this info goes in my direction so it is true" instead of "I suspend my judgment and I cross-reference the sources" but it is natural as a reaction.

Christophe wrote:But for what purpose?

nb: FS will perhaps be right on the MétaHCQ of the "potiches" but as he is by default always a partisan face on the least on the HCQ, it makes sense that he is right from time to time. In any case, for the reasons mentioned above their analysis is not enough for me.
0 x
Haut

pedrodelavega wrote:
Because the case fatality rates are radically different (between 0,3% and 0,7% for the covid Vs between 25,0% and 90,0% for ebola).
As a result, the risk / benefit balance is not at all the same.

If the case fatality rate of covid had been 25 to 90%, would we therefore have used hydroxychloroquine without any problem?

Now is there just the case fatality rate to take into account?

Here we enter the "political" domain
Finally I put "politics" in quotes because at the end of the day there are still nearly 850 deaths, including 000 in France.

Two parameters to be taken into account from my point of view and which would have amply justified a strategy similar to that of ebola ...
0 x
The vegetable gardens - Youtube channel
Haut

Adrien (ex-nico239) wrote:Two parameters to be taken into account from my point of view and which would have amply justified a strategy similar to that of ebola ...

it has absolutely nothing to do with the absolute number, it is just due to the statistic that it takes to have significant results, which depends on the rate lethality (since it is difficult to test more than a few thousand patients anyway, regardless of the extent of the disease). The lower the rate, the more uncertain the results and the more sensitive to confounding factors, and the more precautions the protocol should take.
0 x
Haut
New topic Reply
84 messages

Users browsing this forum : No registered users and 4 guests