but I just found out ... I was already a big fan of Emmaüs stores in real life ... I would think about it more for the next viral shopping needs: 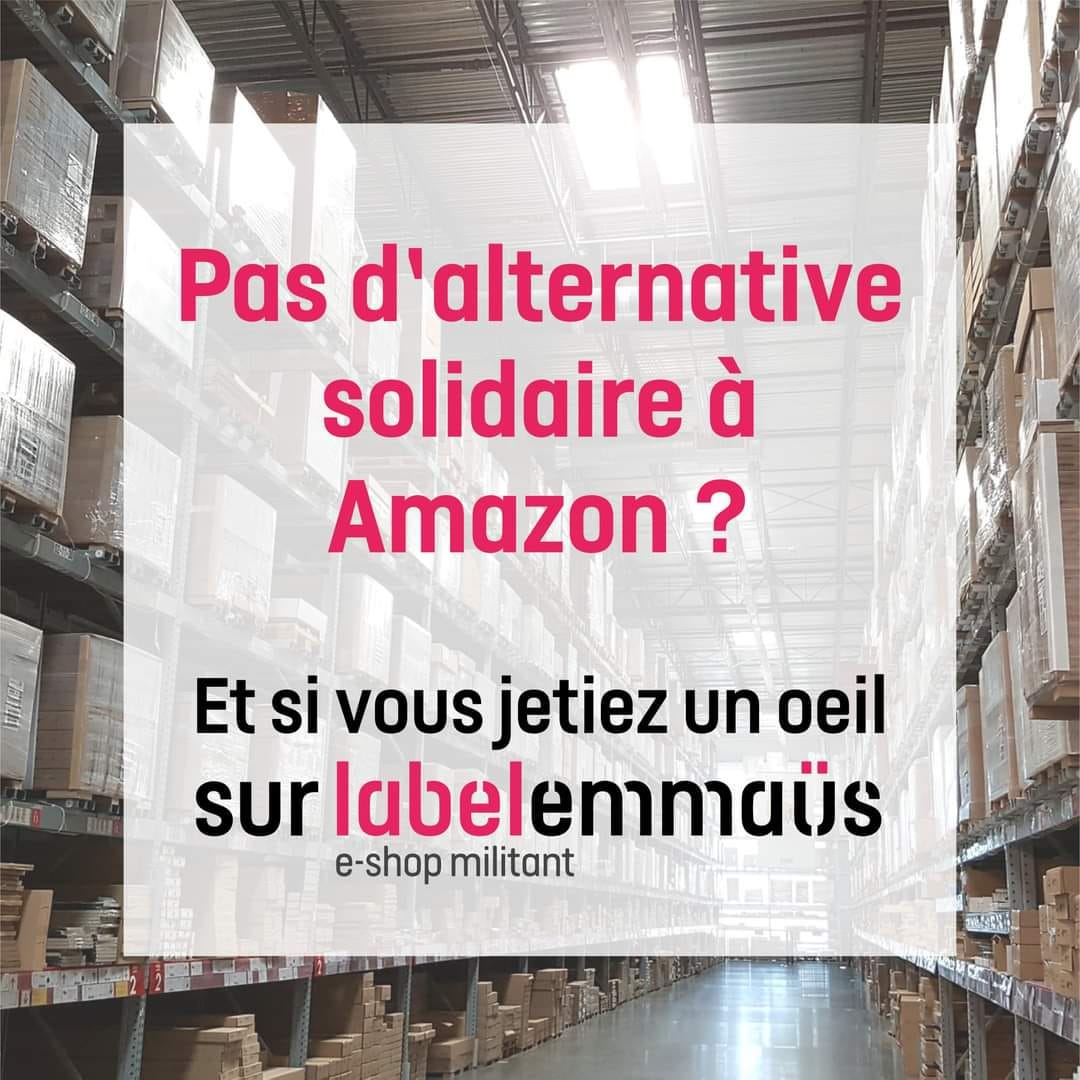 Should we ban Amazon? Because Amazon is killing small businesses, Amazon does not pay taxes, Amazon pays its employees badly, Amazon imposes standardized products on us, Amazon is building huge, ugly warehouses, Amazon, like a vulture, will take advantage of Black Friday to complete the dying shops. In short, Amazon is the big bad wolf and some left-wing shepherds (Hidalgo, Piolle, Ruffin and others) are launching a petition for a “Christmas without Amazon”. By the way, the same sell their books on ... Amazon. But hey, it's not the same, let's not confuse. Above all, Amazon is a big American capitalist company and that, gods, is horrible. The trial is a bit sketchy.

So what to do? Accelerate the digitization of businesses, which are completely lagging behind compared to the Germans. Create, like the Poles, a French Amazon. And, rather than forbidding, petitioning, invoking divine vengeance and lighting candles, let the French choose. If they want deserted city centers and armies of the unemployed, they know what to do.
0 x
Ce forum helped you? Help him too so that he can continue helping others - LET'S IMPROVE OUR EXCHANGES ON THE FORUM - Publish an article on Econology and Google News
Haut

You have summed up here the unique idea of ​​the franchise that I see everywhere opposed to those who innovate and produce: prohibit or tax. This is one of the reasons why there will never be a "GAFA" in France, and why many Gauls will be proud of it. Aiming beyond their borders is not their thing, fortunately some multinationals in the luxury goods, food industry and aeronautics industry do not follow the advice of these bullets.

If Amazon does not pay its taxes, it is up to the state to make it pay. If the little citizen that we are does not pay his taxes, it seems to me that he knows how to do it. The idea of ​​taxing GAFAs instead of making them pay their taxes is squared bullshit. Either they cheat, and then they have to be brought into line, or not. But if we start taxing those who cheat, why not also tax the thieves of bicycles, cell phones, or dealers, while letting them do their business ?! I even suspect that it would be better to be taxed rather than pay taxes, so why would I still pay taxes? I prefer to behave like the GAFAs and be taxed!

I don't know on the employee side, but seen from the customer that I am, Amazon is admirable. Because today there is a considerable value that the French seek, but without understanding that it must be two-way: it is confidence. Is your purchase not right for you? You return it and they refund. Your order has not arrived? They reimburse you without waiting for you to initiate a dispute with the carrier. Do you have a problem with the order? You phone them and they answer, no waiting, not like taxes! Is there a delay in delivery? They warn you and you can give it up if the scheduled date has passed ... In short, these traders are not cheating on us ... They have understood everything, and their customers too, that's why they are successful.

Small businesses will remain small businesses: very little choice and more expensive. They are useful for troubleshooting, or for short circuit food, or if they are able to provide unusual products even on Amazon, or if one is in a hurry. It's another niche.
But businesses like Amazon are essential. Not only is the customer service great, but the fact that Amazon has set the bar high enough has forced others, including French companies, to align and elevate their service. We are no longer in the days when the 3 Suisses sent you the order a month late, or a "similar" product without asking you anything but not the one ordered because it was no longer being done ("miss the mark", said- you, that's it). By its quality of service, Amazon has boosted sales on the Internet, has therefore also favored other companies by giving confidence for this type of purchase, and forced backward or unscrupulous online merchants to evolve or shut down. . Well done Amazon.

Let his detractors do better, and we will abandon Amazon.
0 x
Haut

Yeah, online sales in general work because oil is artificially cheap.
All these vans that run almost empty, on small country roads, contribute to the acceleration of global warming if you look at it closely.
The absence of taxes, the myriad of sellers and transporters at the mercy of these gafas maintain a vicious circle that is increasingly producing greenhouse gases, going against the Paris agreements.

https://www.label-emmaus.co/fr/ is far from being comparable to the quoted giant, but the principle is there.
0 x
"Details make perfection and perfection is not a detail" Leonardo da Vinci
Haut

Vans running empty .... The guy who delivered my auto parts to me yesterday afternoon ... Had a tour of 112 drop-off points ... I was the 91st ... and the van was still well loaded. ..
0 x
The only thing safe in the future. It is that there may chance that it conforms to our expectations ...
Haut

Amazon is just a distributor, it does NOT make ANYTHING, it finds its products in France and elsewhere. Many small boxes today would be dead without Amazon. So easy to believe anything, it must be said that surrounded by stupid specialists in everything, it limits thinking ...

We can also observe that if today, we can go to his "multi-brand" garage and see his vehicle of any brand repaired in 24 hours, what suits us well is that the guy orders parts - that obviously it does not have in stock - in the morning and that it is delivered in the afternoon! That's why you drop off your car at 8 o'clock!

As one might observe that it is better to have a van that organizes a tour of say 100 "customers" than to see 100 customers take their own car (even if it is dirty) to pick up the object that will be delivered to them. It is much more energy efficient.

So it is indeed a little more complex. At least.

But let's not confuse Amazon with delivery networks (or e-commerce in general). In my childhood, there were already French companies that delivered "all of France in 24 hours"! Amazon is much more. Harsh working conditions (let's say it like that), time to piss count by the minute. They are not the only ones. But it is undoubtedly more methodical. It is a global organization to also organize tax evasion - sorry, this is only optimization, a priori (perfectly legal). It is, as we know less, a patiently built organization. We forget that Amazon has accumulated deficits for years and years, just to be the first everywhere and to "squat" everything. No one else has bet so much for this long. I'm not saying it's a fair return. I'm saying no one has bet that much. That's all.
0 x
Haut

To come back to Emaüs: it is first and foremost a huge "recycling center". And in this sense, eminently "ecological". For other reasons. Human. And it was "repairs-cafes", "recycling shops" - also for damaged men. Long before the others ...

I am lucky to have a big Emmaus center near my home .. the sanitary facilities of our bathroom upstairs, toilets, shower tray, sink and faucet come from home ..... A broken bike hop we go to Emmaus ... A piece of washing machine, hop Emmaus ... some rag for the workshop ... hop emmaus ... On the other hand ... When we change the furniture or we have done the great void in the minimacro room 1 that took off .... Go hop Emmaus on the drop side ...
1 x
The only thing safe in the future. It is that there may chance that it conforms to our expectations ...
Haut

Did67, you sum up better than me. I just wanted to add a thought to the Janco and I was mainly thinking of low-cost, low-cost packages (not Emaus).

I'm a little off topic, without AMAZON, a number of small artisans would no longer exist, but we can dream of a more equitable pooling than this monopolization by globalized GAFAs. They take advantage of every man for himself and hold their dealers by ....

The politicians have to agree globally to put all this in order.
0 x
"Details make perfection and perfection is not a detail" Leonardo da Vinci
Haut