Where to place expansion vessel? Wood and gas boiler

Where to place expansion vessel? Wood and gas boiler

I am in the process of installing a wood boiler coupled with gas. To put it simply, the heating return -> in the buffer tank, the hot water from the buffer tank -> gas boiler (with a sludge pot), gas boiler outlet -> heating network.
But the question is very simple, where to put the expansion tank?
What should be its volume? Installation with 15 radiators.

thank you for your comeback

Re: where to place expansion vessel?

It is better to place the vase on the highest floor, and at the highest possible height above the last radiators.
It is very important that the room is “frost-free”.

The volume also depends on the number of kW of the installation and the maximum operating temperature.

But even if it's not great, with a circulation pump "which is fine", I have seen expansion vessels next to the boiler...
0 x
— “Failures will always be able to take pleasure in their “ratitude” (because they are also rats...)!” (– Christopher 1st) 15/06/22
Top

Above all the radiators, it's complicated because the pipes are in the slab… I'm not sure where. At best it is on the circuit that goes upstairs.
Currently (gas boiler only), it is in the boiler room, next to the boiler, I think to put it back there unless it is better on the circuit.
the fact that there is a buffer balloon does not change anything in fact, I put it on the return before the buffer balloon?

Ok for the power, I will try to calculate the power of all the radiators.

Thank you for your feedback.
0 x
Top

Not really in agreement with Obamot: generally the expansion vessels are on the boiler return...so in the boiler room. It is also included in most "modern" gas boilers...and maybe modern oil boilers (it's been a long time since I opened one)

I think that Obamot confuses with automatic drains, which must be placed on high points indeed!

Its volume does not depend on the power but on the volume of the circuit, a subject to calculate it: heating-insulation/calculate-the-volume-of-the-expansion-vessel-t4106.html

10% of circuit volume is a good value with good security.

And here is a subject to adjust the pressure of the vase: heating-insulation / vase-and-boom-tuning-of-the-pressure-and-mounting-t9118.html
0 x
Do a in-depth image search or a keyword search - For good exchanges between members - Publish an article on Econology and Google News
Top

I was talking about an extension vase open.

boumbocox wrote:Currently (gas boiler only), it is in the boiler room, next to the boiler, I am thinking of putting it back there

boumbocox wrote: Ok for the power, I will try to calculate the power of all the radiators.

No, it's not “the power of the radiators”, but that given by the boiler(s). Without being too mistaken, the water capacity of the installation can be estimated with a ladle according to the power of the heating installation on the basis of 10 [litres/kW] (excluding private storage). If the number of radiators does not change, it will just be necessary to add water, if the circuit passes through the two boilers. But otherwise, with the same number of radiators, the rest of the volume of water will not change (don't forget at the end of the installation to bleed the air from all the radiators)

The heating of water by the boiler, causes an increase in the volume of water by a phenomenon of dilation (like a metal which increases in length when it is heated. This phenomenon is natural, it is the expansion of the water.

Note the coeff of expansion, “%d” and a function of the increase in temperature, which makes it possible to determine the additional volume created. (volume of expansion) and denoted Vd.

BUT, if the number of radiators is identical, in principle there will be no change.

Christophe: I had the same as that one: but expansion tank closed, also placed next to the boiler, there's no problem: 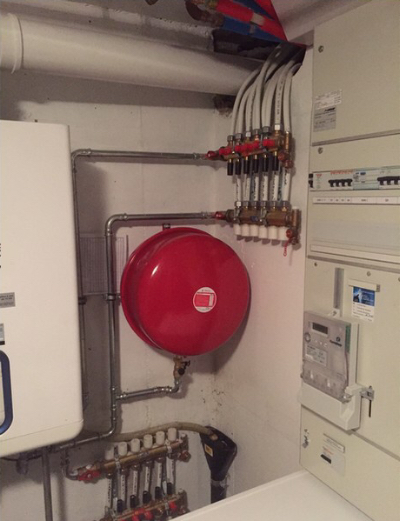 Re: where to place expansion vessel?

Obamot wrote:It is better to place the vase on the highest floor, and at the highest possible height above the last radiators.

What you are describing is an open expansion tank at atmospheric pressure.
It is no longer done, except possibly in renovation if the tank is pierced.

So, you have to put on the buffer balloon too.

All are small, but the advantage is that it does not cost very much.

Better to have several, if a coward, it's less serious.

They are all in the basement....

It all depends, if you have several heat sources (in your case there are if I understood correctly at least 3, boiler, boiler, and heat pump), on how you want to make them work, in parallel, in series, or independently. What is certain is that at least one is needed whatever the operating configuration envisaged and the corresponding closed or open isolation valves.

But normally you have a common "radiator return" point on which the expansion tank can be installed.
0 x
Top

It's a bit like that, the heat pump, not being very young, it does not turn if it is less than 4-5° outside, or very very rarely, because it does not have a good performance at these tp.

On the other hand, the stove turns very often when we are there, and the boiler compensates for the night.

And sometimes, often, it can be the balloon alone that powers the house.

In mid-season, the pump can sometimes heat the tank enough, during the day, to keep the tp in the house.

For me, you also need a vase on the balloon, even if he does not produce heat, but circulates it in the radiators ...
0 x
Forum Econology = Soon ex "playground in kindergarten".
Top

Users browsing this forum : No registered users and 18 guests