Subject dedicated to the evolution of heat waves or heat plumes in France...or elsewhere in the world...

Otherwise, I "cultured" myself a bit: the etymology of heatwave is interesting...it means little female dog...it's linked to the appearance of the star Sirius (Alpha Canis Majoris) from the constellation of the dog in the sky during the warm periods of antiquity!

Paris under 50°C: how the capital will adapt to mega-heat waves

Temperatures will rise this Sunday, July 17 with a peak expected in the coming days and nearly 40°C expected, especially in Paris. The capital is strongly impacted by the effect of heat islands which make life increasingly uncomfortable in housing, public transport and Parisian streets due to mineral materials, housing density and activity. human. An information and assessment mission on mega-heat waves has just been launched to speed up Paris's adaptation to climate change.

This is the third episode of strong heat and heat wave of the year, after those of mid-May and mid-June. And it's probably not the last. This Sunday, temperatures will start to rise again and reach a peak on Tuesday July 19 with 40°C expected in Paris in particular. The capital has already warmed up by +2,3°C since the pre-industrial era. The average temperature could increase by 2,7°C by 2050 and by 3,8°C by the end of the century, compared to 1885, with a projection of +6°C in the worst-case scenario.

According to the "Paris faced with climate change" study, published last year by the City, there will be nearly 20 heat waves (above 30°C) per year in 2030 and more than 34 in 2085, compared to 14 in 2010. The number of tropical nights (where the temperature does not drop below 20 degrees) could triple by 2030. Climate projections also indicate that ground water tables and water flows are expected to drop by here at the end of the century. Tensions in water use would thus be possible from 2050.
An information mission on the mega-heat waves launched

To address these challenges, the Paris Council voted in early July to launch a six-month information and assessment mission, bringing together 15 elected officials from all political groups, who will work on "Paris 50°C : preparing the city for mega-heat waves". The initiative is led by Alexandre Florentin, Generation Ecology advisor in Paris, director of the Carbone 4 Académie and co-author of a fiction on Twitter (@Paris50degres) which takes us to a Paris at 50 degrees in 2026.

"The environmental group had sent a first letter to the mayor in January 2021. The project was well underway and was to be voted on in October 2022, but the early June heat wave, which stunned everyone, made it possible to speed up the process. In 24 hours we had the last necessary signatures" details the elected official.

“The objective is first to increase the level of understanding of the climate crisis with a first phase where we will talk about climatology. It is also a question of creating consensus to accelerate decision-making. more difficult, we must succeed in raising the debate on what we want to save and on what we will have to suddenly abandon, and therefore approach the change of model" explains Alexandre Florentin. Recommendations and contributions will be submitted to the mayor at the end of this work.

More than 70 "Oasis" courses in Paris

Hearings will be held with stakeholders in sectors impacted by high temperatures and heat waves, such as schools, hospitals, transport, roads, buildings and networks. Energy networks could thus be strongly impacted. Certain exercises carried out by the Prefecture of Police envisage the deprivation of electricity for 1,5 million users because of the vagaries of the weather. Public transport is also sensitive to heat waves with deformation of the rails.

Adaptation projects are already carried out sporadically in the capital to adapt to climate change. For example, four misting water mirrors have been installed in the forum of the Halles de Châtelet, the Beaugrenelle slab has been planted, more than 70 "Oasis" courtyards have been identified. They consist in transforming the playgrounds of Parisian schools and colleges into islands of freshness. Eventually, all establishments will be affected. These spaces are also intended to be open to the public.

"There are some advances because Paris took care of the problem early on, but we are not on the right scale, nor at the right pace. The problem is that on this trajectory, if we don't do the job , it is the livability of the city that is at stake. The rich will be able to flee part or all of the year, while the poorest will remain stuck and suffer the consequences of climate change. 'injustice." To get an idea of ​​what awaits us, all you have to do is immerse yourself in @Paris50°C. It's frightening !

ps: and don't forget about yourself... 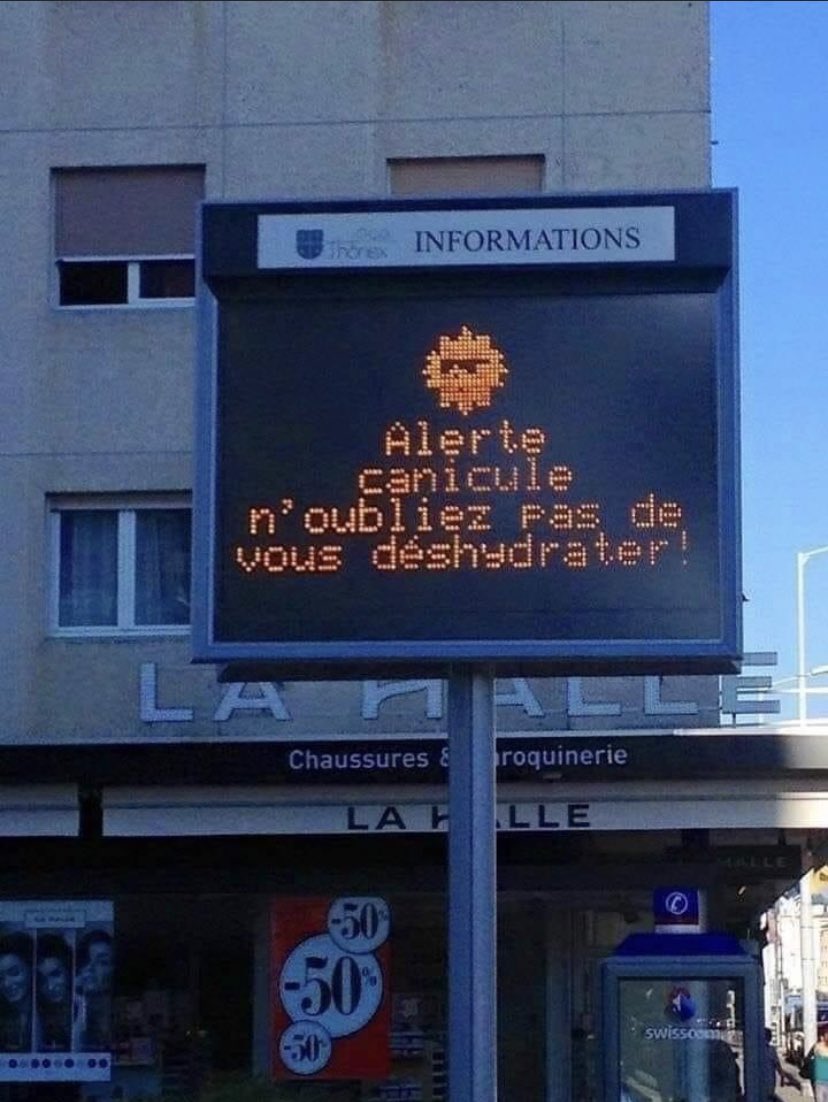 what are we going to laugh about...yellow!

0 x
"We make science with facts, like making a house with stones: but an accumulation of facts is no more a science than a pile of stones is a house" Henri Poincaré
Top

Bah pastis must have an effect on the heat: otherwise it would not be the drink of the south!

Christophe wrote:Bah pastis must have an effect on the heat: otherwise it would not be the drink of the south!

The day before yesterday evening, I transported two German women by taxi who had wanted to get down to the Pernod with another couple of French women... Indeed, it had turned the Nordics around more than the Southerners.

0 x
The only thing safe in the future. It is that there may chance that it conforms to our expectations ...
Top

Christophe wrote:Climate projections also indicate that water tables and water flows are expected to decline by the end of the century. Tensions in water use would thus be possible from 2050.
An information mission on the mega-heat waves launched

To address these challenges, the Paris Council voted in early July to launch a six-month information and assessment mission, bringing together 15 elected officials from all political groups, who will work on "Paris 50°C : preparing the city for mega-heat waves". The initiative is led by Alexandre Florentin, Generation Ecology advisor from Paris

In this case, it will also be necessary for their position on the "basins" to evolve https://actu.fr/societe/deux-sevres-les ... 74752.html

I remind you that "basins" are used to store water during heavy winter rains, to irrigate crops without pumping groundwater in summer... https://www.coordinationrurale.fr/bassi ... i-du-faux/
Water that would be lost anyway, because it would be spilled into the sea, sometimes causing flooding.
0 x
Top

izentrop wrote:I remind you that "basins" are used to store water during heavy winter rains, to irrigate crops without pumping groundwater in summer...

If they don't pump in the summer, they pump in the winter and since the water deficit is obvious, it's a disaster. And one more mainstream lie. A. 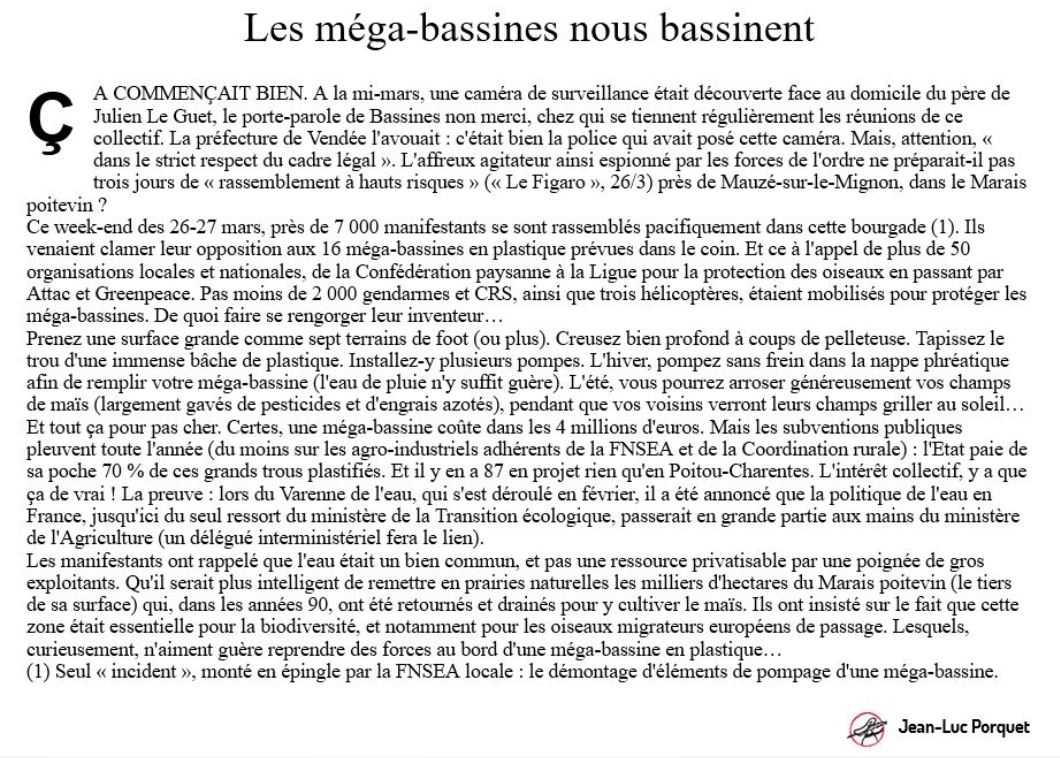 And:
https://www.vienne-nature.fr/bassines-vienne/
https://www.wedemain.fr/dechiffrer/mega ... echeresse/
https://www.francebleu.fr/infos/environ ... 1645626251
So your reassuring press releases from the RC thugs (worse than the FSNSEA), you know what you can do with them... definitely, you don't miss one, on all subjects (almost).
1 x
"It is better to mobilize your intelligence on bullshit than to mobilize your bullshit on smart things. The most serious disease of the brain is to think." (J. Rouxel)
Top

Edit: In fact it is the diversion of a collective good essential to ALL which still and always benefits a minority.

It's true that he gives us the zyzy!!

And it's no joke: