In the context of climate change and soaring oil prices, biofuels are today presented as a sustainable energy alternative. Research is currently taking place on microscopic algae which are particularly rich in oils and whose yield per hectare is much better than that of sunflower or rapeseed. The use of microalgae bioreactors on an industrial scale, which trap CO2 and NOx, is in full development phase in the United States. 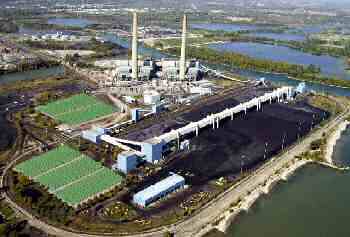 https://www.econologie.com/micro-algues-oleagineuses/
0 x
Do a in-depth image search or a keyword search - For good exchanges between members - Publish an article on Econology and Google News
Haut


Algae is good, too good even, just like electric cars.
Recently, I was in Poland, and I asked how much is the liter of rapeseed oil that is used in cooking .... 0.25 euro per liter ...
0 x
Haut

Hi all. New to econology I congratulate all your work and all your efforts for this wonderful site.
Some information concerning the interest of micro-algae.

The first time I had to deal with these micro algae was for their exceptional capacity to absorb and assimilate CO2 to purify the air, according to an artist creation for the international biennial of Design in St-Etienne. A Brazilian artist (from memory) who presented a vase about fifty cm in diameter with a funnel opening at its top allowing gas exchanges with the micro-algae contained and minimizing the evaporation of the content. This, to renew the interior air of the accommodation and decorate at the same time. Very interesting. Then later I was amazed at one thing, the use of these algae (like Diatoms) for the production of oil.
Diatoms, like many other algae, can generate between 30 and 75% of their weight in oil. if we study the yields in liters per hectare and per year (l / ha / year), we notice something exceptional compared to current productions:

Besides this extraordinary source of oil, 100 times more important per hectare than rapeseed, another interesting aspect: 100t of algae would allow during their photosynthesis to fix 183t of CO2! no data for the other plants nor on the duration necessary to reach it, but these algae having a very short life cycle (fast growth and short lifespan, contrary to the plants which are renewed 1 or 2 times per year according to the cycle culture, ...) it is always interesting.

besides a very simple question to change the subject. The Diesel engine (from Rudolph Diesel) (1891) was designed to operate with 100% vegetable oil, the main advantage of which (and he did not know at the time) is to produce CO2 which is offset (all or part) by the production culture of this same oil, unlike fossil fuels which are not compensated but which create additional CO2. This oil was replaced by diesel because its cost was much more profitable at the time. hence my question: At $ 75 a barrel of crude, WHAT ARE THE STATES WAITING TO LEGALIZE THE OIL !!! ??? it's stupid as a question but it would reduce energy dependence, CO2 emissions and that would satisfy a number of farmers forced by the EU to leave thousands of hectares fallow with quotas ... ??? !!! !

Go back: (source wikipedia)
1891, Rudolph Diesel is testing its engines (Diesel engines) with HVB. He is convinced that vegetable oil has great potential, just like petroleum and coal. You should know that at the start, the "Diesel" engine was first known as the "oil engine".
1900, the OTTO company presents, at the Universal Exhibition of 1900 in Paris, an engine running on peanut oil to respond to a request from the French government.
1925, chief engineer of the Maritime Engineering of the national navy is charged by this one to study the possibility of using vegetable oils for its slow engines.
1939-1945 , the difficulties in supplying hydrocarbons linked to the Second World War prompted certain regions of the world to develop the use of oil-powered engines. Research will continue in the years that followed but the low cost of oil and the political orientations of the time put an end to it.
1997, Valenergol is created and gives a boost to the HVB sector. Only a few years later, this company was sued by customs for non-acquittal of the TIPP (newly known as Internal Fuel Tax), procedure still in progress in 2006.
1 x
As long as there will be men...
Haut

These micro-algae apparently have a truly exceptional potential!
For my part, a simple basic technician, I think that this information should be disseminated to as many people as possible.
Especially since this technology must be able to combine with other processes:
- Thermal electric power stations.
- Biofuel power stations (gasification of biomass, purification of anaerobic digestion stations, etc.)
Are these algae sensitive to variations in sea pH? Could they be seeded on a large scale in the oceans?

First of all, welcome to forums Econology for newbies

Thank you Idocorp for this information, as precise as it is precious.

Francky wrote:Could they be seeded on a large scale in the oceans?

Houlaaa, watch out for these games: almost every time that human beings have artificially introduced or favored a species in a particular biosphere, the natural balances have been seriously disturbed.

Rather than introducing these algae into a natural environment, I think that we can consider "in vitro" cultures. The advantage of these algae over traditional oilseed crops is that you can "climb up".
Let me explain: when we plant a hectare of sunflower, rapeseed or other, we have a single "layer" of production. By cultivating these algae, we can vary the depth of the ponds. The deeper the basins, the higher the production per hectare.
In addition, the production in ponds greatly facilitates the harvest.
0 x
"Anyone who believes that exponential growth can continue indefinitely in a finite world is a fool, or an economist." KEBoulding
Haut

Indeed, introducing these algae on a large scale into their natural environment is certainly not without risk in the current state of our knowledge.
On the other hand, men have already introduced a large quantity of pollutant into the oceans (a random French example: Nitrate discharges on the Breton coasts, even if this has no direct relationship).
The acidification of the oceans (consequence of the significant increase in the CO2 concentration of the atmosphere) worries many specialists.

For now the solutions ???

Targol wrote:Let me explain: when we plant a hectare of sunflower, rapeseed or other, we have a single "layer" of production. By cultivating these algae, we can vary the depth of the ponds. The deeper the basins, the higher the production per hectare.

Excuse me targol for contradicting you, but algae can only be "grown" on the surface (max 20cm, 5 is better).
yes for their growth they need sun !!!! nitrates and CO².

it's super solar panels, it can clean up Breton rivers and absorb CO²; but it can not be cultivated in a deep basin.

If you want to do it, you have to do it like the Australians and the Californians. Huge transparent pools very narrow and vertical. I think it's easier to make pools flat and 10cm deep.

@+
0 x
Said the zebra, freeman (endangered breed)
This is not because I am con I try not to do smart things.
Haut

So there, such a crime of lèse-Targol, I don't know if I will be able to forgive ...

Well, the question is therefore how to - while keeping the same surface area on the ground - increasing the "surface" of culture while avoiding falling into the pitfall of complex and energy-expensive technical devices ...

Imagining growing them in glass tubes placed vertically, do you think that could do it?
If we use thermal convection (by painting the bottom of the tubes black, for example) in order to create a movement of the water, we could perhaps "gas-corbonize" all this without any system of pumps.

What do you think ?
How would you like to think about the eco-friendly "Algae Farm" with me?
Aim of the operation: optimize the floor space by using only renewable energies, avoiding overly technological responses (maintenance, complexity, fragility) ...

: don't pay attention to this smiley, I put it on to please Zoe (3 years old) who absolutely wanted the "sad little guy".

: "Now, daddy, you put the monster"
0 x
"Anyone who believes that exponential growth can continue indefinitely in a finite world is a fool, or an economist." KEBoulding
Haut

Targol wrote:Well, the question is therefore how to - while keeping the same surface area on the ground - increasing the "surface" of culture while avoiding falling into the pitfall of complex and energy-expensive technical devices ...

The floor area is not a problem in itself because we can make pools everywhere.
the bubbles which bring the CO² either, an air hose a venturie, a well placed pipe and the shape of the basin calculated so that it turns; it's OK.
Nitrates, I'll let you guess, but that solves it all by itself.
No, the problem we encounter (because of our incompetence in the field).
It is: being established that one refuses to import a non-native species (the total and reliable confinement to 100 / 100 is a utopian dream). which alga to use?
I have been looking for a year and no one has been able to inform me.

Targol wrote:How would you like to think about the eco-friendly "Algae Farm" with me?
Aim of the operation: optimize the floor space by using only renewable energies, avoiding overly technological responses (maintenance, complexity, fragility) ...

we have a lot gambergé (incidentally we have a basin and a centrifuge), so if you want to gamble together is yes right now.

Targol wrote:: cry:: don't pay attention to this smiley, I put it on to please Zoe (3 years old) who absolutely wanted the "sad little man".


dirty kid not asleep yet

This is not because I am con I try not to do smart things.
Haut

I find this subject fascinating, I do not have time to participate in the development of the question at all because I am starting a restoration season but I am with great interest this thread

0 x
--
Patience is a tree whose root is bitter, and whose fruits are very sweet.
Haut

Users browsing this forum : No registered users and 14 guests