A video of Stephen wolfram British scientist known for his work on cellular automata:
http://www.ted.com/talks/lang/fr/stephen_wolfram_computing_a_theory_of_everything.html

He is the founder of a new type of search engine called Wolfram Alpha: http://www.wolframalpha.com/ which responds to the entry of factual questions by calculating the answer from a database (in English for the moment ...)

His works are inspired particularly by the famous "Game of Life" of John Horton Conway: http://fr.wikipedia.org/wiki/Jeu_de_la_vie

The principle is simple: from extremely limited rules, it is possible to generate by iteration an evolutionary process that can reach a higher level of complexity, for example: 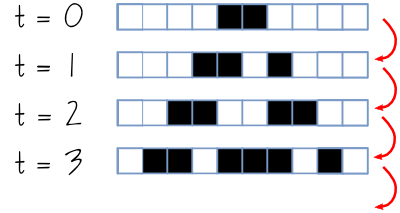 This gives, if we proceed to very many iterations in the following figure (called rule 30):

What is interesting in this figure is that from completely determined rules it is possible to quickly generate appearances of figures completely random see chaotic ...

Beyond a simple theoretical demonstration, such work could have outlets in fields as varied as computer science, biology, astronomy etc ...
0 x
"Engineering is sometimes about knowing when to stop" Charles De Gaulle.
Top

I had missed this subject! Interesting, you already talked about the game of life here: https://www.econologie.com/forums/post256663.html#256663

Here is a 3D video of the game of life (with the software to download as a bonus): http://www.youtube.com/watch?v=SMP2slNmkTY
0 x
Do a image search or an text search - Netiquette of forum - Support the forum doing Useful shopping
Top

Is there software on the Wolfram simulator somewhere where you can change some parameters? I would like to do some tests ...

The link I posted yesterday from that of the game of life in 3D seems suspicious, not daring to install it ...

There is software golly:
http://golly.sourceforge.net/

It allows you to create many different rules and forms and to make them evolve accordingly.
0 x
"Engineering is sometimes about knowing when to stop" Charles De Gaulle.
Top

An explanatory and very well made video of David Louapre on the game of life and cellular automata.

To watch until the end!
0 x
"Engineering is sometimes about knowing when to stop" Charles De Gaulle.
Top

How not to relate to what Marx called the "automatic subject"?
Although this oxymoron was the source of great misunderstandings in most Marxists themselves (it is more subtle than the class struggle!), Which led them rather to ignore it, the mode of action of the abstract value consists of very simple elementary rules from which arise extremely varied configurations during successive iterations.
It is also one of the motivations of the founding fathers of capitalism to decouple the functioning of society from human decisions, by tightly subordinating the latter to a fetish, i.e. a referent created by men, but hypostatic (substantiated, considered real); A.Smith spoke of the hand "invisible hand" of the market, liberal economists then tables on "natural laws" of the economy ... Everything is indeed like a "second nature" which would rule substitutes basic physical laws .
The result is a unification of the action of men for a goal now undisputed, since located in a beyond (derisory, certainly, but however metaphysical), does not remain any more since an internal struggle (immanent

) for the market allocation; and we can clearly see that this mimetic struggle exhausts by itself the little that it contains of contestation.
0 x
"Please don't believe what I'm telling you."
Top

Not to be confused with a cell in the biological sense with a technological and mathematical cell as a small part of a whole.
0 x
"We make science with facts, like making a house with stones: but an accumulation of facts is no more a science than a pile of stones is a house" Henri Poincaré
Top

One of the possible formulations of capitalism's basic rule is this: "there is a market where trade goods against money, so that WADA '."
Or:
- A represents the money invested in the manufacture of the goods (labor, energy, raw materials, depreciation, machinery, costs);
- M symbolizes the goods (in the broad sense), that is to say a good or a service made for the sole purpose of being put on the market to participate in its transformation into a new sum of money;
- A' is the initial sum, increased by the profit.
Then there are successive iterations, sometimes with slowdowns, then reconfigurations and new repetitions, but we can clearly see that it is inevitable that a blockage occurs at some point. One of the possibilities to postpone the stop of iterations, would be to split AThe money in two roles: the money is not only "the general replacement of any goods", it is also a commodity likely to produce a profit (even a double benefit), resulting in some way the formula A AM A '. This development corresponds to the current phase of industrialization of finance.
Note, however, that this disconnection from physical goods is only apparent since profits are involved in the consumption of physical goods and even now represents the condition for the possibility of industrial economy.
1 x
"Please don't believe what I'm telling you."
Top

Ahmed wrote:One of the possible formulations of capitalism's basic rule is this: "there is a market where trade goods against money, so that WADA '."

Yes it is a relevant rule!
Given the complexity of the process, few rules could be considered depending on the explanatory fields such as economics, sociology, technology, etc.
overall Exponential economism works like elementary cellular automata (ACE), except that here the development grid is both our neo-cortex on one side and the planet on the other!
For a human being the success of the current economic system is explained by the capacity which the latter provide to its imitators to increase their chances of survival *.
Rather than black or white boxes, in our case, these are electro-chemical signals or bits of information (Memes) which replicate from brain to brain and lead their biological hosts to the construction of a project largely ignored by the carrier ...
For the rest it is based on the evolutionary algorithm: attempt

Memorization then iteration if success.


* At least temporarily ...
1 x
"Engineering is sometimes about knowing when to stop" Charles De Gaulle.
Top

For a human being, the success of the current economic system is explained by the capacity which this latter gives to its imitators to increase their chances of survival *.
* At least temporarily ...

The strategy of the company consists in increasing its productivity, that is to say always decreasing the quantity of work, by doing so it undermines the bases of its profit, which forces it to increase its production (as I wrote here -above). But this process constantly renewing itself (and being generalized), the value tends towards zero, while the quantity of goods tends, it, towards infinity, just like the resources which it mobilizes: one can easily maintain that it is the success of this process which guarantees its bankruptcy ultimately.
The agents of the system, meanwhile, find themselves in a society (at a particular moment in history) based on work, in a society that destroys it relentlessly: their survival is therefore very problematic. Even after the systemic collapse, who can believe that the psyche can be reconfigured quickly, when dependence on fragmented work (whose usefulness could be easily ignored) kept them away from any directly useful activity?
0 x
"Please don't believe what I'm telling you."
Top
New topic Reply
15 messages