6 years after my first 3D printing experience with the K8200 (see this forum), I have just invested for my different prototypes in a new 3D printer, a Tronxy x5Sa-pro 500 with 500x500 plate that allows to make fairly large parts, we are no longer in the geek trinket! 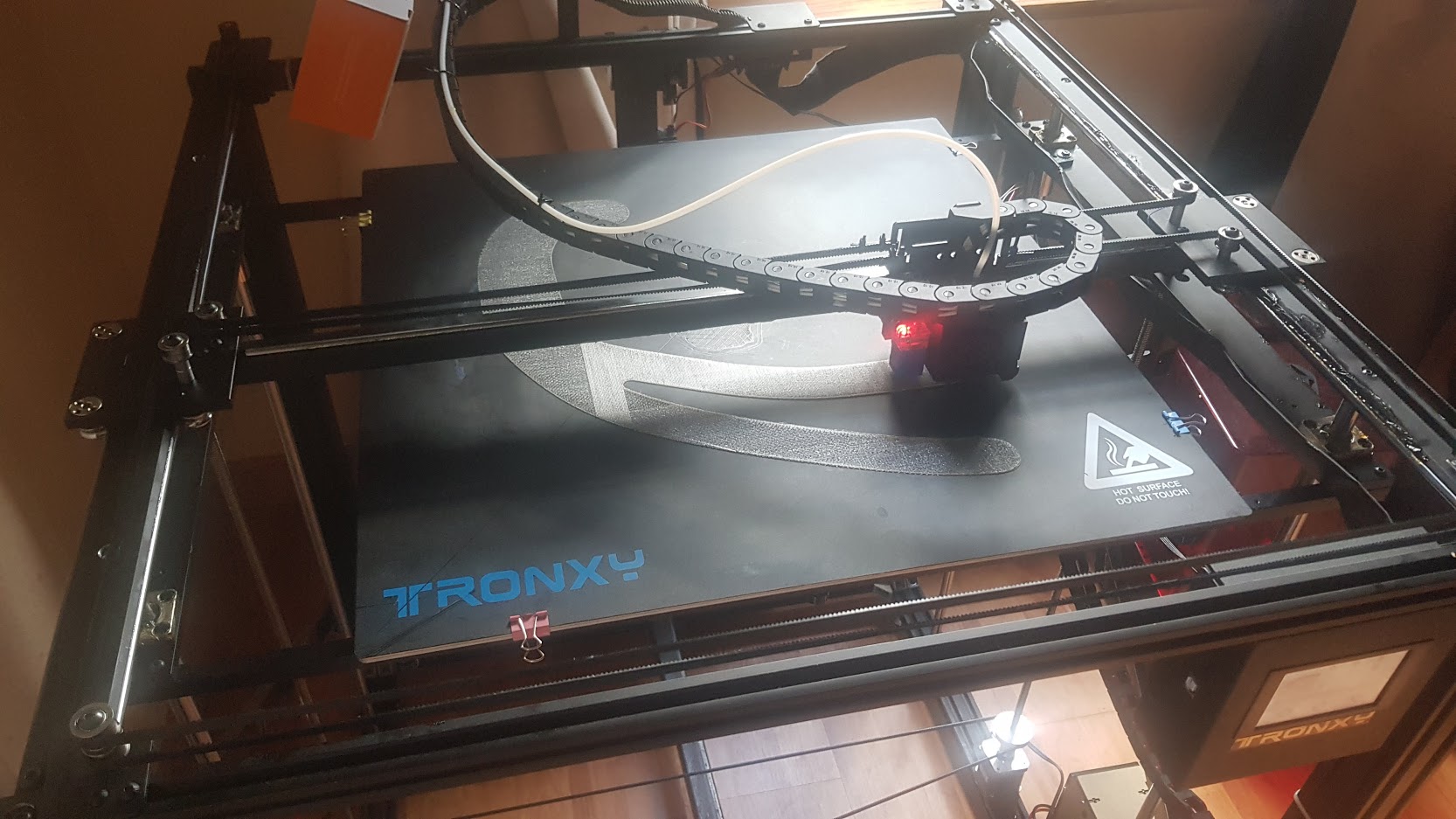 My opinion and feedback after a few weeks ... and 2 kg of melted plastic!

a) The printer works well despite its size and a little laborious assembly (some steps in the manual poop in china are just reversed ...). You have to be very rigorous ...

Because yes, given its mounted dimensions, the printer is sold as a kit, allow a good day to assemble it properly, understand the software and launch your 1st printing.

Some YouTuber moan about this model and cannot make square squares or round circles because they obviously do not know what correct squareness means ...

Like this ball that is just a sucker in basic mechanics ...

b) It is a large format CoreXY printer, that is to say that the movements in XY are done with 2 synchronized motors which allows a better precision (quite relative it remains molten thread ...).

A more detailed review here from the pros: https://all3dp.com/1/tronxy-x5sa-pro-re ... ter-specs/

c) The software provided is really good, very well translated, very efficient and has nothing to envy to the software of printers 3 times more expensive of "brand"

For the moment I have only tested PLA and PETG ... to be continued!

g) I come to the main question of this topic .... improving the Z axis.

Considering its size there are 2 motors for the Z axis, one on each side of the chassis and that's where ... despite the "pro" designation, there was still a design flaw. These 2 motors are not mechanically coupled.

And therefore pressure or friction on one side tilts the plate which is obviously not good ...

So I coupled these 2 motors mechanically added 1 wide toothed pulley on each Z axis as well as a homemade mechanically welded adjustable tensioner system. the tensioner could be optional if a closed belt of the right size is found ... but I did not find. 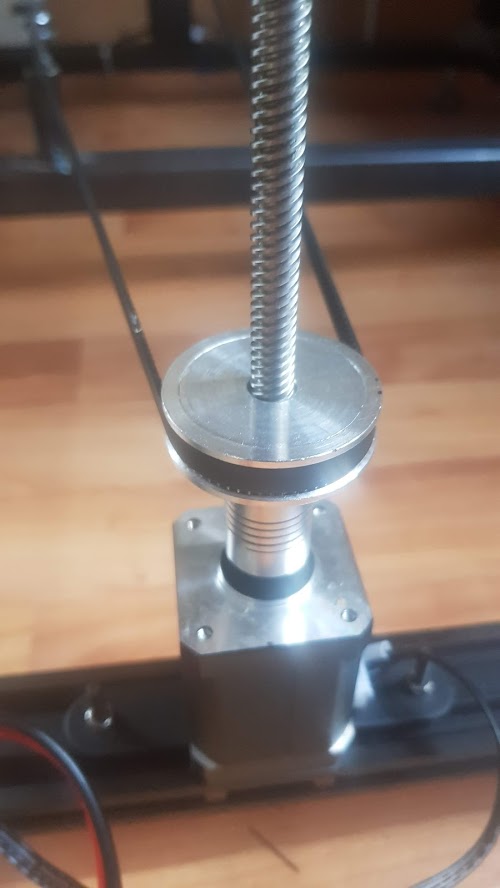 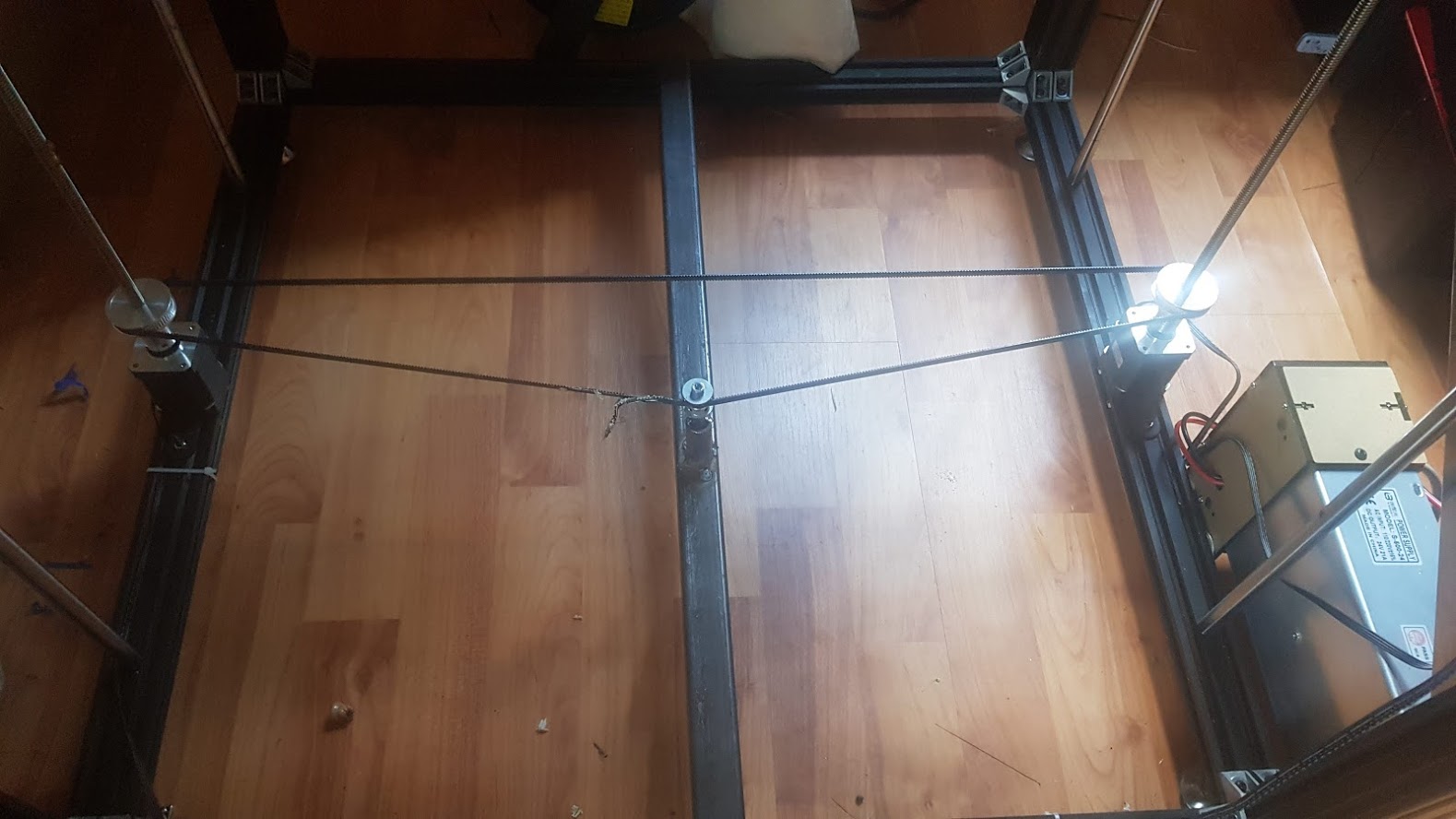 My concern is the assembly of the belt (as they are sold "open") ... I struggled with a few staples and a little glue but it is really dirty and I do not know how long it will last (l 'Z axis does not move much but still ...) 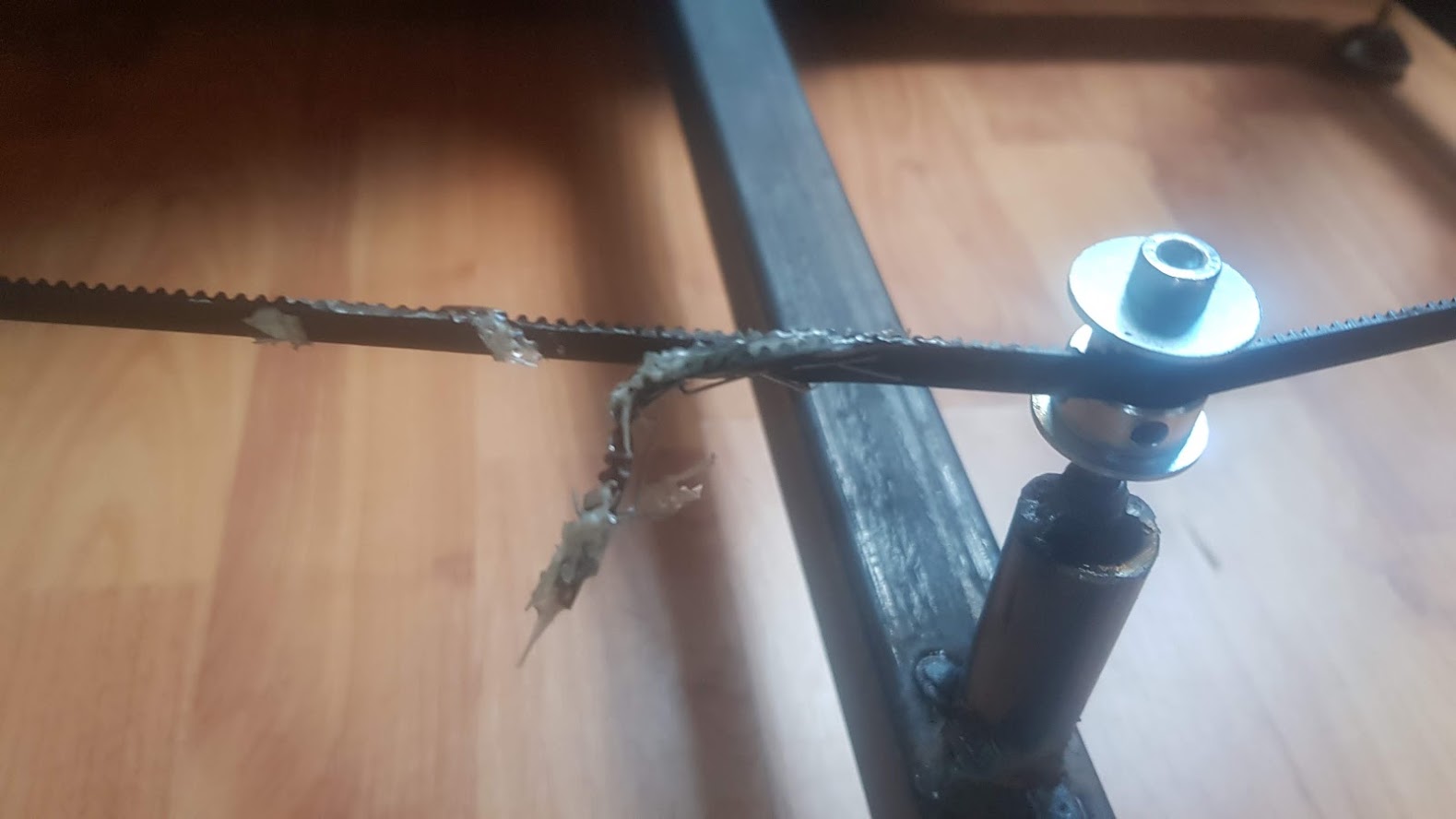 Anyway, somebody would have a method to properly assemble a small toothed belt of 6 mm? I tried with a soldering iron without result ... Thank you ... Please note that the belt must always be able to circulate in the 3 pulleys ... otherwise it was easy !!

The basic idea was bad: I am now sure that there is a differential correction of the 2 Z motors, at times one Z motor turns more than the other ... I must have observed a lot of impression for realize it!

Pairing them is not a good idea..the 2nd youtuber is wrong ... Mea Culpa for having listened to it without verification ...!
0 x
Do a image search or an text search - Netiquette of forum - Support the forum doing Useful shopping
Top

ps: the tension on the belt to be glued is not very important (I have 3 cm of arrow on the longest length) and the efforts are not important either since it is just a synchronization belt ... which will only be useful in the event of mechanical failures mentioned above.

Try a cold vulcanization glue, with a consequent bevel: there are glues for that, such as those for bicycle inner tubes. If that does not go, a hot vulcanization glue would be more effective, but more delicate to implement.
0 x
"Please don't believe what I'm telling you."
Top

Ah? Ok thank you, I'll try that ... but the symmetrical bevelling will be tricky ... there is less than 1 mm in notch. The only solution is to remove the notches from the outer belt therefore.

Do you have references for hot vulcanization? How much should you heat?

When I did my soldering iron test, it melted to heart (bye bye the teeth ...). I could see that the belt was reinforced with strands ... (like all modern belts you will tell me eh ...)
0 x
Do a image search or an text search - Netiquette of forum - Support the forum doing Useful shopping
Top

The temperature is between 60 and 90 ° and the duration varies with the heating capacity ... It depends a lot on the type of rubber. Another simpler solution would perhaps be to use Loctite 406: it is suitable for these materials and it is very fast. As for the textile reinforcement, there is not much to do, but with low mechanical stresses, it will not be a problem.
0 x
"Please don't believe what I'm telling you."
Top

Ok ok i will see

It was just to say that it was reinforced (even such a small strap ...)
0 x
Do a image search or an text search - Netiquette of forum - Support the forum doing Useful shopping
Top

At a time when it was still possible, I witnessed the repair of car tires that suffered from a tear or a hole: the edges were carefully ground, rubberized material was applied and a jaw formed. of 2 electric resistances came to compress the whole. After vulcanization, a very regular and very solid "potato" was obtained. Gone are the days ...
0 x
"Please don't believe what I'm telling you."
Top

What is a very regular potato?

I don't know this form in mathematics!

Small remark that I just noticed on the operation: the Z axis "moves" permanently, that is to say on the same layer it goes back and forth according to the position of the print head, I did not live it noticed without this coupling belt as these are very small movements. The belt moves a few mm ... would have to calculate how many µm that corresponds with my modification.

I would tend to think a) because the effort to move the plate is still substantial ... and the print head is hot and should fit into the plastic part so ...

* there is an adjustment of the flatness of the plate to be made before a printing which therefore seems to intervene ... on the other hand this adjustment is not obligatory, I mean it does not ask to do it before the start of the printing systematically so a little doubt remains!

I'll mess it up and experiment to see if the Z axis corrects any more!
0 x
Do a image search or an text search - Netiquette of forum - Support the forum doing Useful shopping
Top

I spoke of "potato", because the rubber contribution formed a small bulge compared to the original profile; kinda like a weld, if you know what i mean ...
0 x
"Please don't believe what I'm telling you."
Top

Yes I see (a little if you find a photo it's better) ... and the balancing was going on?
0 x
Do a image search or an text search - Netiquette of forum - Support the forum doing Useful shopping
Top

Go back to "3D printers and 3D print: machines and technologies, hardware, software, use and optimization"