Company: analyzes by Jacques Attali. The past and the future?

Company: analyzes by Jacques Attali. The past and the future?

Here are interesting analyzes and ideas about our (consumer) Western societies (in the past and especially the future) by Jacques Attali.

Have you noticed how he speaks with so much certainty and confidence about the future?

Attention there are 4 minutes of the video (from 12:00 to 16:00 approximately) which is an analysis by Attali of the influence of the Jewish people in history and in the world today. These words could be echoed by some anti-Semitic speeches, which is not at all the message of this video! I just don't agree with the talmudic (biblical) dogma that "man must rule over nature" ... until further notice, man is still part of nature and without it he cannot survive !

Too bad the very last extract was cut before hearing Attali's response! 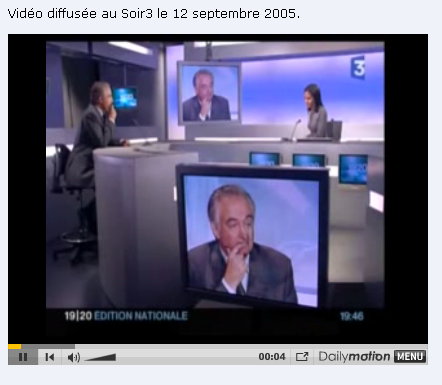 Shit, I’m falling from the clouds!
As much as I found the previous video relevant, this one is quite disturbing in the sense that it advocates a world government:

If I was a conspiratorial and paranoid I would think that the current crisis was wanted and organized by those who want this world government in order to legitimize its creation ...
0 x
Do a image search or an text search - Netiquette of forum - Support the forum doing Useful shopping
Top

The excerpts from the 2nd video are excerpts from the JT at 20 p.m. of FR2 from last Friday 11/10! They are still on the FR2 site: http://jt.france2.fr/20h/
0 x
Do a image search or an text search - Netiquette of forum - Support the forum doing Useful shopping
Top

Well that's what it says in substance: to have a world democracy, you need a world government ... Easy to say ... applying it is something else!

So elected by whom? Surely not universal suffrage !!

For example, it took 20 centuries to unify Germany ... it is not in 20 years that we will unify the world, especially given the difference in wealth ... Or else we need major crises. And here we fall into conspiracy ...

Ultimately this world democracy could only be a world dictatorship ...
0 x
Do a image search or an text search - Netiquette of forum - Support the forum doing Useful shopping
Top

That's exactly what I was thinking!
Or a form of despotism supposedly to enlighten the genre of everything for the people, nothing by the people. But on second thought, it's still a dictatorship!

If we add to this the differences in wealth ...

0 x
Every action counts for our planet !!!
Top

for example, the financing of the RSA so complicated to set up before the crisis with its tiny billion budget compared to the thousands of billions out of a knack to "try" to restore the situation ....

Debt money (remember?) Has no limits, so why are we still starving on the planet?

I find it all revolting, and a world government would indeed solve many problems, but is this the stated goal ?????
0 x
"Consumption is similar to a search consolation, a way to fill a growing existential void. With, the key, a lot of frustration and a little guilt, increasing the environmental awareness." (Gérard Mermet)
OUCH, OUILLE, OUCH, AAHH! ^ _ ^
Top

Capt_Maloche wrote:Debt money (remember?) Has no limits, so why are we still starving on the planet?

Capt_Maloche wrote:I find it all revolting, and a world government would indeed solve many problems, but is this the stated goal ?????

Hey ... do you think a world government will consider all people as equal? Humanity is (still?) Far too varied and different to be ready to accept a GLOBAL government.

Will an African be treated by this government on the same level as an American? Do not dream...

Then first what does a world government mean? Who would manage what exactly? Elected by whom? Doesn't the money already control the world? In this sense: the king of the world already exists, his name is Mister Dollar ...

In addition there is already the IMF: quite a success

I heard him (Attali) this morning on RMC, he was not talking about a modial government but rather about global coordination and regulation because the economy is globalized it is not us little French people, even Europeans who can solve this deregulation problem in our corner: we need an agreement and a fortiori a control body at the global level.
0 x
The absurdities of yesterday are the truths of today and tomorrow banalities.
(Alessandro Marandotti)
Top

Users browsing this forum : No registered users and 6 guests