The Bluff on France 2. disposable society!

The Bluff on France 2. disposable society!

No one refers to this issue of France 2 who nevertheless directly addresses important topics, so I glue myself!

Summary for those who have not seen:
Vendors chains supermarkets appliance affect premiums to systematically guide buyers to the most profitable products for their box.

The repairers (of these same boxes), tested on a simple failure (motor power plug disconnected), content themselves 9 times out of 10 to briefly look at the device (dishwasher), to declare it "dead" and to invoice their "performance".

Questioning product engineers who willingly propagate in-house theses, they are suddenly silent when the journalist tells them about the deliberately shortened lifespan of these devices (what is called planned obsolescence) and simply stammer. : "we do not communicate on this subject".

In against point presented a thorough independent repairer and a company that repairs flat screens by changing only the defective component of the electronic cards, and at a reasonable cost.

What does that inspire you?

Read also on the subject: industrial-obsolescence-the-story-of-a-deception-t9854.html

And another report broadcast on Arte early 2011: Ready to Throw on the history of industrial obsolescence: https://www.econologie.com/telechargeme ... rogrammee/
0 x
"Please don't believe what I'm telling you."
Top

Hello!
Well I think this reflects the ideological centerpiece of our company: to satisfy growth.
The same practice exists in the automotive field (among others ...) or we replace a yes or a no = significant money inflow for OEMs!
The throwaway society ...
0 x
Top

There are good thirty years, the review "Test-Achat" published an edifying survey, so on a super simple failure (main switch of a TV) it was edifying.

On the other hand, a friend of mine "old fashioned" troubleshooter tells me that things are getting painful anyway: detecting a lot of faults on recent equipment is becoming difficult and changing the sub-assembly (there are only three a flat screen TV) becomes painful:
price of the room (in 2 3 times the original price) + profit + shipping + labor = 3 / 4 the price of a new one.
It should also be a regular at the brand because service manuals are expensive
Let's be realistic now at certain devices: the first VHS video recorder that I sold was $ 1979 56000 FB (either 1400 2,2 euros multiplied by the equivalent of 3080 euros): it was absolutely necessary to repair. A basic DVD is trading at 59 79 euros, while working hour to open and make a diagnosis is trading between 30 and 50 euros.
0 x
elephant Supreme Honorary éconologue PCQ ..... I'm too cautious, not rich enough and too lazy to really save the CO2! http://www.caroloo.be
Top

elephant wrote:Let's be realistic now at certain devices: the first VHS video recorder that I sold was $ 1979 56000 FB (either 1400 2,2 euros multiplied by the equivalent of 3080 euros): it was absolutely necessary to repair. A basic DVD is trading at 59 79 euros, while working hour to open and make a diagnosis is trading between 30 and 50 euros.

The example you cite is quite correct, nevertheless almost all electronic equipment nowadays comes from Asia, a country practicing "social dumping".
So in fact from a purely economic point of view to replace cheaper (in this area will, and yet ... cheap oil, not for long ...), but from an ecological perspective c is an aberration!
0 x
Top

The regulations require the Walloon Region to recycle computer gear government at the end of life: that is, to destroy it to recover materials (metals, plastics)
The Flemish are smarter: governments can sell, which can recover just outdated machinery at a price without competition.
In the same line: the European Communities GIVE their old gear (in 4 10 years) to Oxfam which reconditions: you and find old PC, strong usable office for 150 euros.
0 x
elephant Supreme Honorary éconologue PCQ ..... I'm too cautious, not rich enough and too lazy to really save the CO2! http://www.caroloo.be
Top

@ elephant:
The last part of your first post rightly exposes how the current problem arises, in purely economic terms. This is certainly relevant, but allows to consider things that within a certain systemWithout seeing it more broadly.

The continual increase in productivity (production) gradually leads to a corresponding decrease in selling prices, which itself requires an increase in productivity (= automation further, more intensive human labor and / or less paid) to maintain a internal rate of return sufficient.
The other consequences are the degradation of quality and the search for new sources of profit linked to the sale of the product: excess profits on spare parts, addition of a distinctive attribute "can" such as 50 programs on a washing machine, gift " bonux ", striped toothpaste, fashion (changing by function) ...

The issue of spare parts not overvalued that may arise for large appliances such as automotive, in other areas I'm not sure that manufacturers are the least interested ...
In the report, we see that to intervene on an electronic map requires considerable tooling and with the integration of Ascending thrust components, very soon it will be impossible to do so.
Long ago I repair items, I have found this development: often there is no possibility of any compensation, and it happened to me recently to try to restore a new object (a first defective had gone as collateral and the second was not much better, due to faulty design)!

It's a shame (but that's the limit of the television genre: it remains a show), the report presents these practices as surprising, shocking, but that fortunately, there are honest and scrupulous to counteract this state of regrettable things.
It is a moralistic point of view is adopted, the better to forget that the purpose systemic* Is only exchange value (profit), and that the use value (what research the buyer) is residual, Ie it is only a pretext for the realization of the exchange value.

Of course, reality is complex and certainly there are still people who do not work entirely according to this logic: they are important (and unintentional!) In the perverse functioning of the economic system, since they diversion by creating confusion in the minds.

* And not only the chains of stores in question.
0 x
"Please don't believe what I'm telling you."
Top

I am told that Mercedes Benz was funding its research and development ..... with spare parts!

I do the same conclusion! if one were to use the equipment repaired ago fifteen still operating the electric consumption would be higher, the quality, the lower performance, the amount of used superior material, pollution may be higher (that generated by production, repair)
what bothers me most right now is that we do not undertake a systematic recovery solution of the material which is discarded
current bins are gold mines
about the issuance, there a few years ago, an equivalent was released, and it was already in the times
if I compare my first video of 80 years 15 kg weighed today he weighs 1.5à 2 kg (but not repairable and disposable)
0 x
Top

One or the other element:

1) The addictive side of consumption: the "value" is not the use we make of it (if not, why change cell phone when it works perfectly?), But also the image we hope to give of oneself ... And so every 2 years, the "image effect" that the object has disappears and you have to buy one, more expensive, to derive new satisfaction from it ...

So I think there is an "addictive" (like a drug) side to our use. And that we need to be treated ... It is urgent (for us, for the planet too!).

2) Difficulty to repair certainly; labor cost certainly ... So it is not always "profitable", of course!

But: a) what about non-integrated ecological costs? So society of "all disposable" somewhere in the dead end anyway ...

b) what about the simple little breakdown that we no longer even detect - we must not "deflect" the debate. The fact established by the report is that 3 repairers out of 4, in the show, did not make an ultra-simple diagnosis, a "failure" that they could have detected with a simple Metrix ...

The motor does not work? (All have seen) So he receives power? Not like? There's Does juice output programmer? Like yes! How is it that this does not pass between the two? Here, a disconnected connector ... I still recalls the colors are coded son!

5 years ago, just after the warranty expires (additional), my dishwasher is leaking. I returned, a fitting that was rubbed was pierced. Grand means: silicone, bike tube, necklaces ... All for 10 balls! 5 years and that makes it work!

I am convinced, having watched the show, that if I had made for repair, he would have advised me to buy a new one! It is still the single or double life (if it die there).

No, there are scandalous things! The remuneration system for salespeople and repairers and - in part, I do not blame them totally - a kind of lack of professional conscience, it is the sign of a degenerate society ... ).
0 x
Top

When it comes to electronics, the evolution has been meteoric and comparisons are difficult. On the gray energy point of view, power consumption, waste materials and toxicity of the materials used in the Asian countries that supply a percentage increasingly important to the global electronics, the best and the worst, often following the will the Western client.

By cons, in manufacturing in Western countries, it has been making efforts on the amount and number of toxic / harmful employees even if we remain in the disposable. The change could have been much worse in relation to the environment.
The most toxic is the commercial method that aims to create obsolescence at the root. 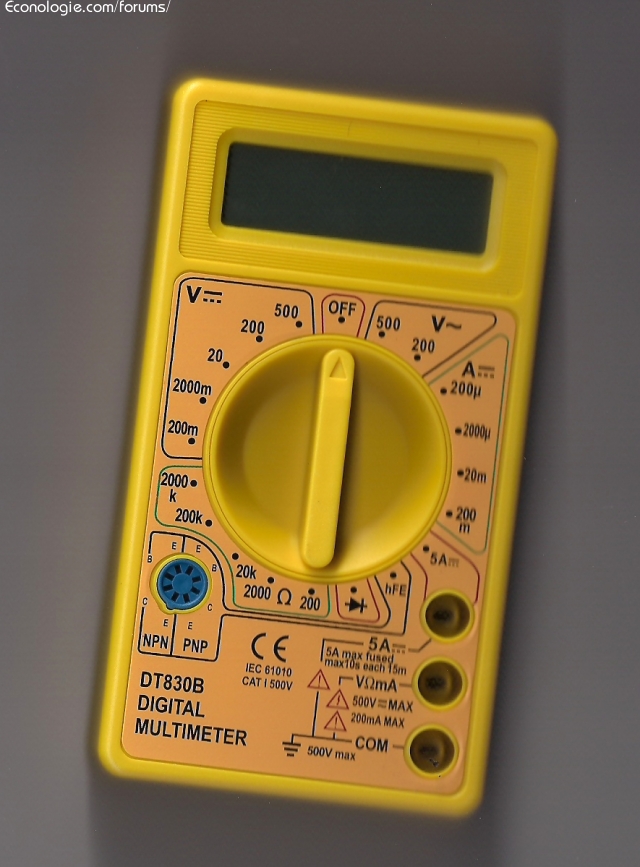 It works very well and has very good features for the price: 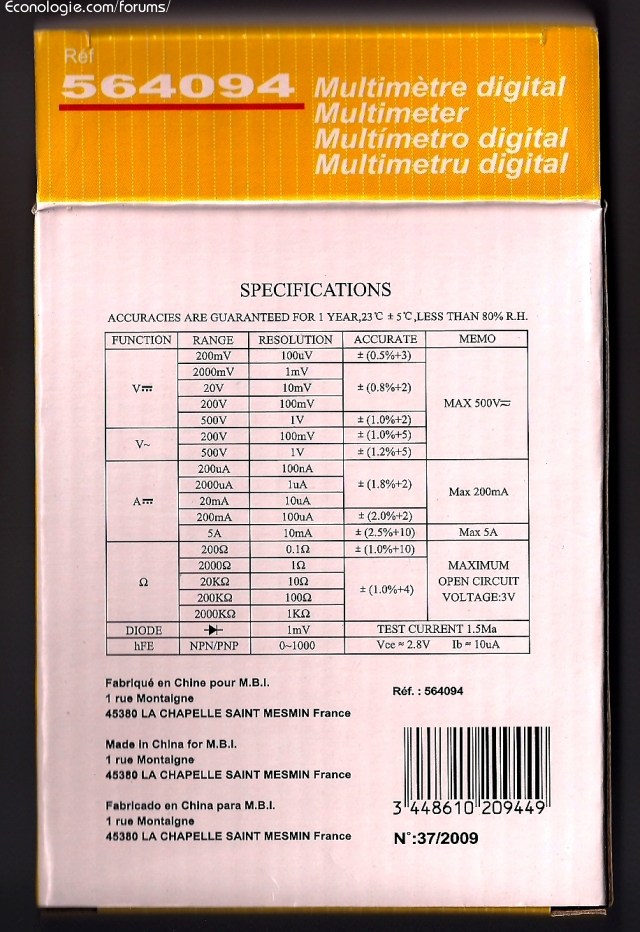 Users browsing this forum : No registered users and 65 guests