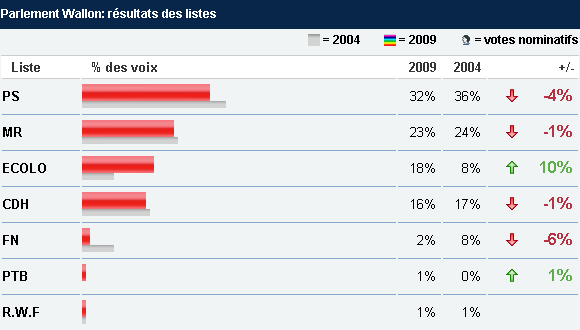 A historic progression has just been achieved by the Ecological Parties: Europe Ecology in France and Ecolo in Belgium.

In Belgium, a double ballot took place: European women and regional parliamentary elections. Voting is compulsory in Belgium, so absenteeism is very low!

In Wallonia at the Walloon parliament, the Ecolo party wins 10% of the votes cast (125% in relative progression!), going from 8% to 18% and it thus becomes a strong political party in Wallonia! All the other major parties are logically losing votes.

Results of the 2009 elections for the Wallonia Region, source RTL

We can see the same phenomenon in the Brussels-Capital Region on the French-speaking side since Ecolo goes from 9 to 20% (progression of 120%) but the Groen only go from 9 to 11% (progression of 22%). These figures are given in progression compared to 2004 as indicated on the diagrams.

In European women, on the other hand, Belgium only accounts for about 12% of the 2 green parties (French and Dutch speaking sides), weighed down by the Flemish vote!

Read also:  From Paris to Fukushima, the secrets of a catastrophe

In France, Europe Ecologie is at more than 16% (19% by adding the 3% of the Alliance) and gains more than 100% of votes in relative progression! Indeed, never had a green party exceeded 10% in a national election in France! 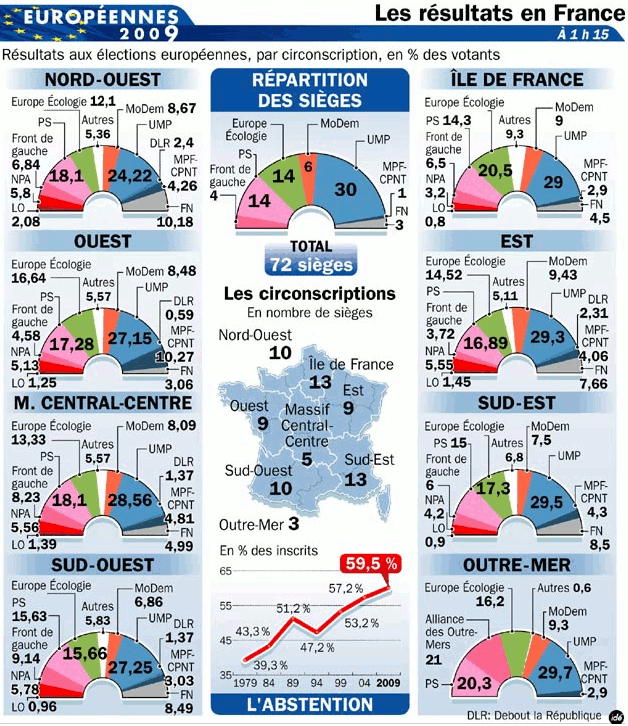 In some constituencies, Europe Ecologie is even ahead of the PS or the UMP! We will greatly appreciate the more than 20% ofEurope Ecology in Ile-de-France!

Does abstention explain this?

Not really because in Wallonia, voting is compulsory… and progress is impressive there. It would seem, and we are delighted, that there is a real fundamental change in voters!

Controversy over the broadcasting of the film Home?

The dissemination of Home movie Did last Friday really heavily influence the vote? Of a few tenths of a percentage, no doubt, but, likewise, such an increase cannot be explained simply by the diffusion of a film, this film undoubtedly only reinforces certain conviction, and at best, decides some undecided ... But have not all the media always had a more or less influential role in the political choices of each other? It only becomes undemocratic when the government of the day controls or tries to get hold of them.

What happens next? What can we expect from this?

Now that the ecologists have become a strong party, we are entitled to expect, perhaps more than for the other political parties, concrete results and actions in the field of the European environment!

We hope that the qualification (defamatory insult?) by Sarkozy of the ecologists of small sectarian group will never have to be again!

More:
- The "green" breakthrough at the polls
- The 2009 European elections
- Did the diffusion of the Home film influence the voting?
- Home movie released on June 5

Read also:  Expansion of the Brennenstuhl range on the econological shop and an economical job searchlight.