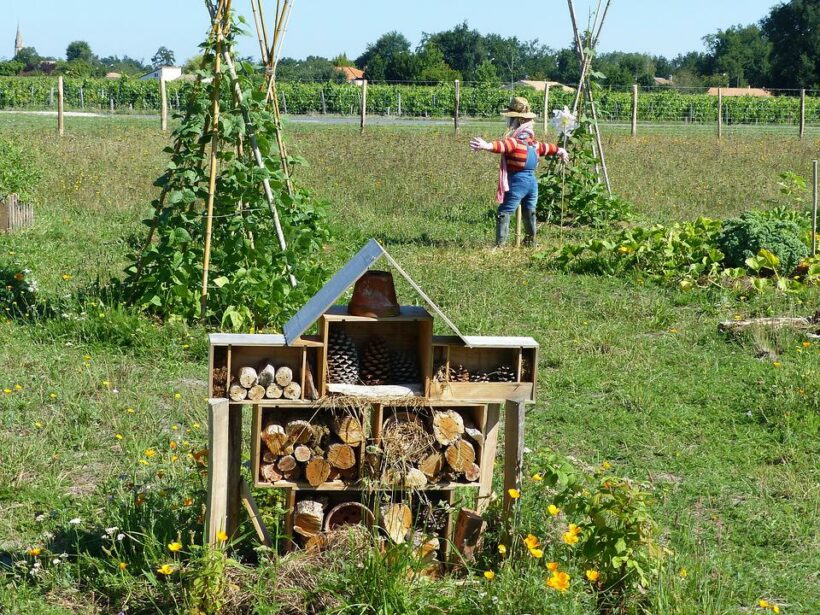 With the arrival of spring temperatures it is tempting to embark on the development of gardens and green spaces, or even that of a balcony vegetable garden. This is therefore the perfect time to recall the concept of permaculture, a mode of agriculture based on sustainable development, respectful of biodiversity and people and whose objective is to imitate the functioning of natural ecosystems.

The main concepts of permaculture

The word permaculture was assembled from the words "permanent" and "agriculture", on its own it reflects the concept used quite well. Thus it is a question of cultivating by paying attention to the land, to men and by taking care to redistribute the surpluses produced. The concept was born in the 70s on the initiative of Bill Mollison and David Holmgren or rather was reborn since in nature, everything is permaculture!

The goal is to recreate an ecosystem in its own right in which to harmoniously integrate the elements that one wishes to cultivate. Thus permaculture will not be limited to growing vegetables. It is a whole set of elements aimed at producing healthily and sustainably. For example, by favoring varieties that self-sow themselves: as is the case with squash, carrots, but also certain salads such as lamb's lettuce or lettuce. A fairly complete list of these vegetables can be found on the site LazyGardener.com

Since 2014, on the forum econology, Didier Helmsetter has also developed a new technique of hay-based permaculture. Many sloth garden books, were even published following these exchanges on the forum ! You can regularly find Didier on his Youtube channel:

It can also be a question of cohabiting with insects already present in the environment. Thereby earthworms are the best allies of permaculture. They allow the soil to be aerated, which then promotes the growth of plants. It is also possible to include animals that can contribute in their own way to the success of your vegetable garden. Thus a few hens in a garden cultivated in permaculture can naturally prevent the proliferation of insects that destroy plantations (slugs and snails for example). They will also participate in the aeration of the soil and produce eggs. Be careful, however, to respect a reasonable space for the number of hens introduced in order to avoid an opposite effect and too much degradation of your land.

Another insect to mention: the ladybug! Introduced in the form of larvae, it will effectively and naturally fight against the aphids on which it feeds. Below is the photo of a ladybug larva, give them a warm welcome in your plantations: 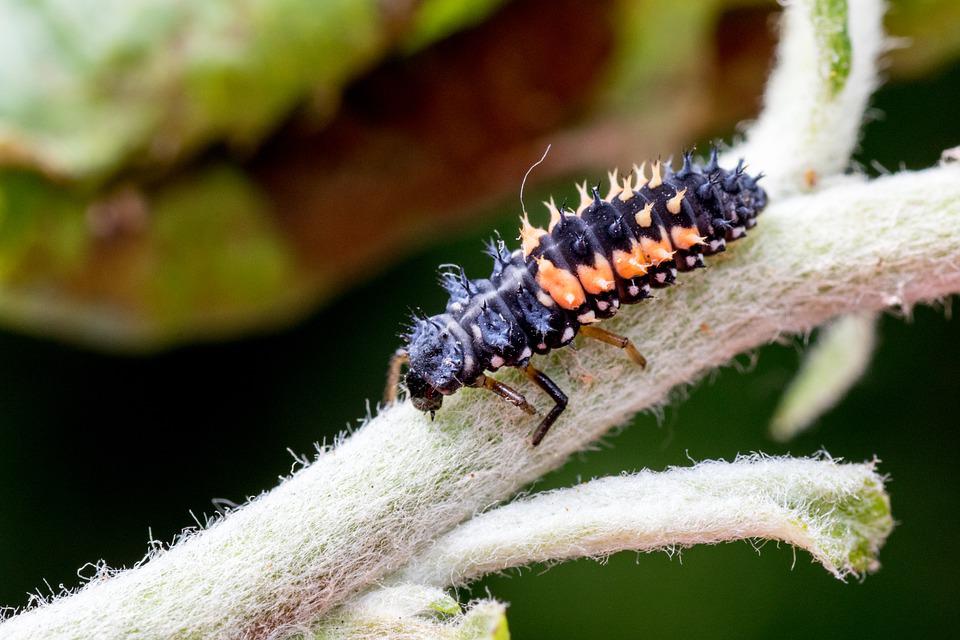 How and when to start a vegetable garden or a permaculture garden?

There are several permaculture methods, and therefore several starting possibilities. A first approach is to not till the soil at all. For this to be possible, it will have to be mulched so that the plants no longer grow there so that it can then be replanted. Before mulching, it is advisable to cut the grass close and leave it in place. Once the grass has decomposed, the ground can be covered with a substrate such as straw, wood chips, but also dead leaves or BRF (Bois Raméal Fragmenté). The possibilities are varied. The following video explains what BRF is and how to make it:

Mulching usually takes place in the spring. It must then be left in place for a whole season without planting to attack the crops the following spring in properly prepared soil. Mulching should not be placed on soil that is too dry, too cold or too packed. It is possible to practice it at the end of summer or in autumn, but not recommended to do it in winter.

Another cultivation method is to lightly till the soil. This method is recommended, for example, on heavy or packed soils. It is then a question of working the soil on a 15th cm, using tools such as the claw, the grelinette or the vole. In the following video you can discover the grelinette:

After the passage of these tools it is advisable to remove weeds (name given to weeds in permaculture) and add compost to enrich the soil.

What is the mound system?

In permaculture, it is also possible to work by creating what are called “mounds”. These are areas of land that you will develop by raising them from the ground to a height of 15 to 30 cm. However, you should know that their design will require time and more technical knowledge than by planting directly on flat ground. It is therefore necessary to first think about the benefit of their use.

There are many different types of mounds. Some are “placed” directly on the surface of the ground, while others are built on “buried” trunks (these are the Hulgelkultur mounds, named after their designer). This second type of mound decomposes very slowly, and will require very little maintenance despite being more complex to set up. The ideal is to be able to build the mounds in groups in order to facilitate their development.

Mounds are not suitable for all situations, they are even not recommended for certain ecosystems. Thus a windy climate contraindicates their use because they would tend to dry out too quickly. However, in cases where the mounds are feasible, they then bring many advantages: aesthetic, practical since there is no longer any need to bend over to work. The mounds also help to avoid compacting the soil. They will make possible a good irrigation of the soil, without favoring the excess of humidity, which will be favorable to the growth of plants.

The importance of choosing the layout of plants

In permaculture, it is the associations of plants that will allow a synergy beneficial to their growth. In nature, we often find certain plants next to each other. This is the case, for example, with the wild strawberry plant, which frequently grows at the foot of the hazel tree. It will also be possible to combine plants that will have a long cycle with other plants with a short cycle, for example potatoes with radishes or lettuce. These associations will allow the plants to benefit from the advantages that will be provided to them by the neighboring plant (this is the case, for example, of a tall plant which would bring shade to a more fragile plant). Be careful, plants in the same area, or on the same mound, must however have the same needs in water, fertilizer, etc.

On the other hand, some plants may be added for the purpose of acting as an insecticide for their planting area rather than for consumption. Indeed, insecticides and chemical fertilizers are to be avoided. Basil, for example, is a good repellent against flies and speckles, but also against ants. Lavender is also an effective insecticide, in maceration it can also be used in the house against spiders, but also against fleas or even certain dust mites. Be careful though because some plants certainly have a repellent action against insects, but also a strong tendency to spread quickly in the vegetable garden at the risk of suffocating other plantations. This is the case, for example, with mint, which develops very quickly using its stolons.

Watering and composting in permaculture

The use of rainwater recovery tanks allows the watering of your land to be as natural as possible. Depending on the size of the land, it may be advisable to have several tanks near the areas to be watered to facilitate the implementation. On the other hand, it can be useful to have several uncovered water points in your land so that insects, but also birds can come and drink there. Be careful, however, that these water points do not turn into stagnant water attracting mosquitoes!!

To reduce the frequency of watering, a solution has proven itself: the use of oyas. These are terracotta water tanks that are buried near the plant you want to water. The marram grass must be covered to avoid too rapid evaporation of the water, it is also possible to mulch them to further reduce evaporation due to excessive heat. However, it will take an average of 20 euros per seagrass, which can quickly represent a significant cost.

Another solution can be to water directly at the foot of the plants to limit water loss. This time it will be easily achievable by recovering plastic bottles so it will suffice to remove the bottom, before burying the neck at the foot of the plant to be watered. It will then be enough to fill the bottle regularly, rather than spraying randomly with a jet of water at the risk of promoting the burning of the leaves by the sun.

Finally, another important element to integrate into your land: compost. It will be essential to allow you to give a second life to the weeds that you have had to remove. But also and above all to contribute to the enrichment of the soil for your crops. The ideal is to use a composting solution that allows you to insert your green waste from above. Then recover the compost later using an opening facilitated on the bottom.

The following video presents the advantages of turning to an agriculture that is more respectful of the soil and nature: