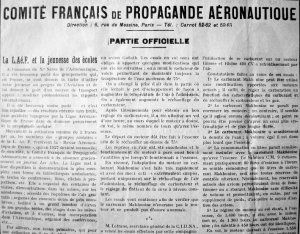 Following the tests carried out, in 1926, by the Ministry of the Navy, on the fuel Makhonine and information taken from the official services of this Department, the French Propaganda Committee Aerospace, judging considerable benefits that would present, in the aviation, the use of this non-flammable product, intervened with the leaders of the Air Union and CIDNA for the tests to be undertaken on commercial aircraft.

Communication of the results of the first tests was given to the Steering Committee at its meeting of the 17 this month.

A first engine was tested on the bench without any modification of the carburetor or the air intake; From the very beginning, he gave very convincing results.

The power that was from 263 CV to gasoline was from 246 CV to Makhonine fuel.

Idling with gasoline and Makhonine fuel was 400 towers.

The covers were very frank.

The temperature of the water which had been brought to 90 ° at the beginning of the test with the Makhonine fuel, was gradually lowered to 75 °, without the repetitions being worse. Below 75 °, the revisions became impossible.

No fouling of the candles was found.

After these tests, the engine was mounted on a Goliath aircraft. The flight tests forced us to make some modifications that were as follows: the radiator was equipped with flaps to maintain the water temperature above 75 °.

The air intake was lengthened in the part where she licked the muffler so as to increase the temperature of the air at the intake. Carburetor heating has also been increased.

After trial and error to obtain a good adjustment of the carburetor, it was carried out a flight of one hour, during which the engine gave, in flight, the same number of revolutions as with gasoline.

The engine start had to be done with gasoline to warm it above 75 °.

The air pickups were excellent and the engine sounded as good at the audition as when running on gasoline.

In summary, the adaptation of the engine to Makhonine fuel was done very quickly and with extremely simple modifications, dealing only with the heating of the intake air, the reheating of the carburetor and the adjustment of the float of the tank. constant level.

The tests will continue to verify that the Makhonine fuel does not foul the engine and does not produce abnormal wear.

Mr. Lefranc, Secretary General of CIDNA, reported on the tests carried out by this company.

CIDNA had already, at two years old, begun an investigation to study under what conditions it would be possible to replace gasoline with a less flammable fuel.

Steps were taken with an inventor, Mr. Bellem, who had managed to operate in very good conditions, several cars and trucks heavily loaded, whose engines were indifferently fueled with gasoline, oil and heavy oils.

The method consisted in providing each engine with a small injection pump which introduced the liquid into the engine cylinders with a sufficient intake delay so that the liquid was vaporized entirely by the vacuum created in each cylinder at the time of the injection. aspiration.
In the meantime, the company formed by the manufacturer of this device had to dissolve and the CIDNA could not finish in its workshops, the assembly of an engine 400 CV Lorraine, which had already modified the camshaft.

In the course of the year 1926, the CIDNA was interested in the tests of Makhonine fuel and repeatedly addressed to the Technical Service of Aeronautics which declared not to be aware of the tests pursued by the Navy and of which nevertheless several newspapers summarily reported.

At the beginning of December 1926, CIDNA's attention was once again drawn to this question by the article by Mr. Houard in Les Ailes which urged that commercial aviation do tests itself without waiting for the tests. officials of the administration.

Less than a week later, the 8 December 1926, a first flight of 20 minutes was made with great success by a six-seater commercial aircraft Blériot 46, equipped with a Salmson CM 9 260 CV engine. It was the first time since aviation existed that a commercial aircraft could fly with fuel other than gasoline or benzol.

The following days, many flights proved the success of this test and several official commissions of the Ministry of the Navy and the Aeronautical Services could attend and take part.

Currently about ten hours of flight have been made.

In order to undertake a systematic test of engine consumption and endurance, a new Salmson engine, out of service and workshop, was mounted on the aircraft and the flights continued.
At the same time, CIDNA is developing the use of this fuel on an air cooled Gnome and Rhône 400 CV engine.

Findings made during these tests:

In summary, it can be estimated that if all the above results are confirmed, the entire aviation, military as well as civilian, may consider Mr. Makhonine as the inventor who has definitively eliminated the most formidable danger of which it suffered.
If moreover, it is confirmed that the production of this fuel can satisfy, without difficulty, all the needs of France, as well civil as military and maritime, the invention of Mr. Makhonine would be of an almost inestimable national interest. (…)