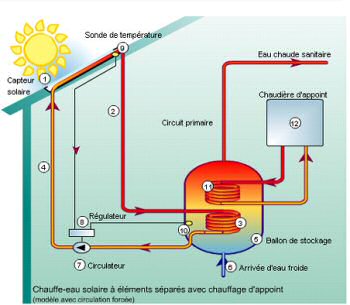 Solar thermal recovers heat from the sun with a fluid that circulates in the panels. In mainland France, the solar thermal represents over 55 000m² panels.

The purpose of a solar thermal panel is to transmit the heat emitted by the sun to a secondary water circuit. The sun's rays pass through the glass, inside an absorbent plate which aims to capture infrared rays. Behind this hot plate passes a water circuit which recovers this heat.

Subsequently this circuit supplies a secondary circuit that can power a home or domestic water heating.

The circulation of water can be done by simple physical phenomenon, hot water is less dense than cold water. This is why in the diagram hot water is always above cold water. 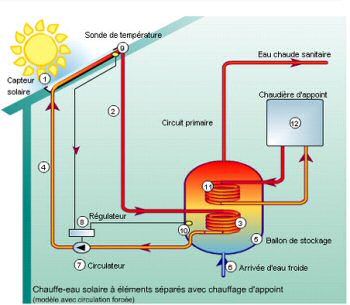 Principle of a solar thermal panel for domestic hot water.

Conclusions: high potential but an energy that is still expensive.

Solar is one of the oldest "renewable" energies. Prehistoric men already used it to dry their fish, for example.

Today it is once again on the front of the stage with the exhaustion of fossil fuels and global warming and its development potential is very important since it is very rarely exploited.

Finally, to conclude, we would still add a word about state subsidies.

If they make it possible to democratize solar energy, conversely they also allow an overbilling of the installations (the subsidies are given only on the most expensive installations) ...