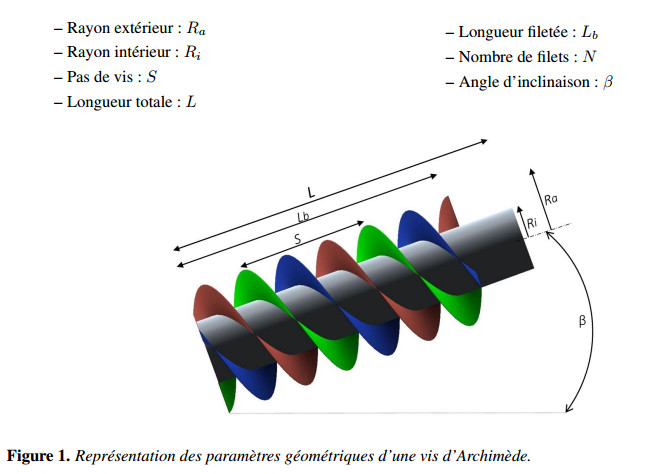 The use of the Archimedes screw in micro-hydro is a means of producing renewable energy and in recent developing. It is mainly used to exploit waterfalls low flow rates and low heights. We propose here to study experimentally the performance of this type of turbine based on hydraulic and geometric parameters. A first portion showing the influence of the water level downstream of the screw on the performance of the turbine. The yields and the pairs are then experimentally measured in terms of the speed of rotation of the screw fixed rate and, based flow fixed-rotation-speed. The results provide essential information on the design of this type of micro-plant.

The principle of the Archimedean screw is known for over 2000 years. Although this is disputed by many historians, is generally credited with the invention of the screw Archimedes of Syracuse (287-212 BC). It is from the 14ème century we started using the Archimedean screw to raise large amounts of water over low heights. Today, one still commonly used for elevation of wastewater treatment plants for example. It was not until 1992 Karl-August Radlik offers for the first time using the Archimedes screw, or hydrodynamic screw as turbine to generate energy [RAD 97]. The first micro-central Archimedes screw in the wild is then installed in 1997
River Eger Aufhausen (Germany) and develops a power of 4 kW . There are now more than 180 facilities of its kind across Europe and more than 400 worldwide [LAS 11]. According to Williamson et al. [WIL 14] these micro power plants have a high potential on the waterfalls of low height and low flow rates. The maximum height is about 10 m and throughput can reach 10 m3 .s-1. The most powerful central installed to date is located on the Albert Canal (Belgium) and develops a power of 400 kW . Among the main advantages of this type of plant, we note, first of all, his ability to keep a high efficiency despite fluctuations in flow. Thus, the rate may vary more or less around 20% of the rated flow without this having any impact on the performance [BRA 93]. A recent study on micro 70 plants in Europe showed that the average yield of all of these facilities was to 69% with a maximum of 75% [LAS 12]. Two other important qualities are its robustness and the fact that it is a fish friendly installation itself. Indeed, according to a study conducted by Kiebel et al. [KIE 09], for rotational speeds and generally used for undersized fish to 1 m, They can cross the central micro unharmed.
The use of hydrodynamic screw for energy production is a recent technology that continues to grow. Despite this, the literature about the Archimedes screw used for energy production is still insufficient for truly optimized design of a central microphone. In this context, it is proposed here to study experimentally the hydraulic performance of the Archimedes screw for the geometric parameters and the various hydraulic operating conditions. These experimental results are obtained using an experimental device installed at INSA Strasbourg. The results will understand the influence of each parameter and therefore, subsequently, to be able to optimize the performance of the Archimedes screw.

More: the use of Archimedes screws in hydroelectricity on forums