Here is a news that should please all defenders of water injection and Gillier-Pantone, according to an unofficial source (former classmate of the promotion), Renault and PSA are working together to get out as quickly as possible (it is is to say at the end of 2009) a diesel engine with water injection extremely similar to the Gillier-Pantone process.

This work is a continuation of the work on water injection that Renault has been carrying out for years and of which here is a patent from 2005: Renault patent for water injection and heating by exhaust gases.

The novelty with respect to this patent is the use of a electronically controlled instant steam generator evolved but above all a simulated steam treatment "reactor", exactly like a GP reactor, in order to to ionize the water vapor. This is the official explanation that matches perfectly with the explanation we posted on Econologie.com over a year ago. Read: ionization theory of water vapor in the GP reactor.

Another development in relation to our research: in order to avoid the driver having to fill up with water, Renault will use its research on condensation of exhaust gases. Here too, the work is not new because Renault had filed a patent in 2004: Renault patent for exhaust gas condensation.

The system will first be installed at the end of 2009, series, on Renault's V6 dCi to be extended to the full range of engines of 2 French manufacturers in the years that follow. 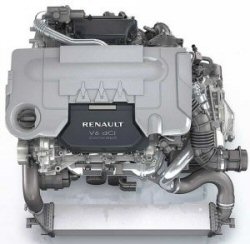 The commercial name has not yet been revealed but there is no doubt that the Gillier-Pantone name will be ignored ... NIH Syndrome is far too tenacious ...