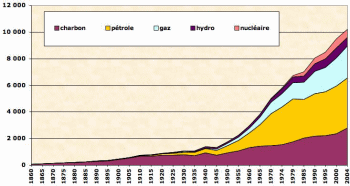 What is the global consumption of primary energy, its evolution since the beginning of the industrial era and the different sources of energy used by humanity?

The answers to these 3 questions are in the graphic below (click on the image to enlarge):

These pages have their origin on the forum of discussing : learn more and offer questions / answers about energy.