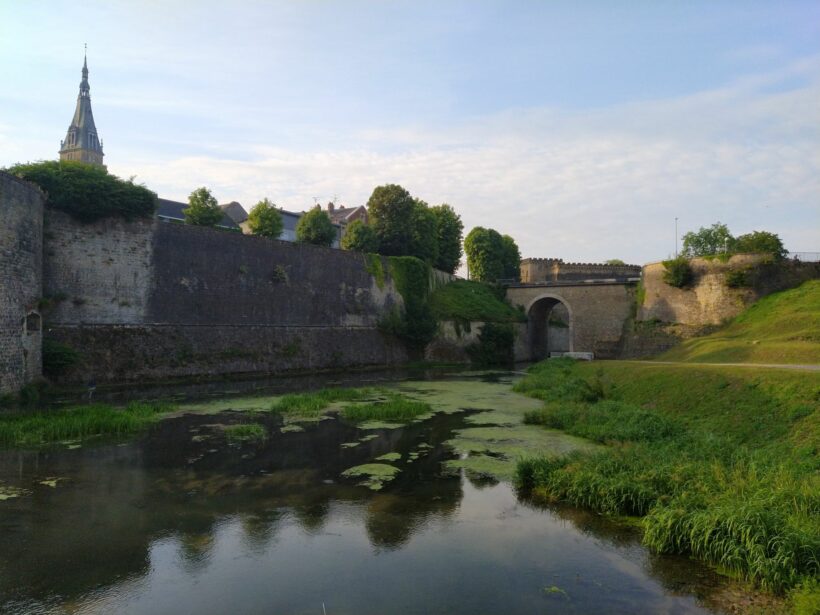 In recent years, heat waves have been steadily increasing. This summer of 2022 is no exception, with temperatures exceeding 40 degrees in some cities in France. By 2050, some parts of the world could become uninhabitable, this is the case, for example, of South Asia, the Persian Gulf and several countries bordering the Red Sea. Elsewhere in the world, in parallel with the global increase in heat, episodes of heat waves could also become more numerous in most major cities. France will not escape it, so how can we best protect ourselves from these waves of strong heat?

What are the main interests of urban greening?

A heat wave is defined as a period of intense heat day and night, lasting at least three consecutive days. The temperatures to be reached to be able to speak of a heat wave vary according to the regions.

source: Le Monde: From what temperatures can we speak of a heat wave in each department? (click to see the interactive map)

In France, a classification of Figaro establishes the cities that could be most affected by the increase in heat waves by 2040. We find Annecy, Lyon and Saint-Étienne on the podium. But other cities, particularly in the Grand-Est (Dijon, Nancy, Strasbourg, etc.) are also represented there. However, it is in the big cities that heat waves are the most difficult to live with. Each year, they are responsible for an increase in hospitalizations and health problems that can lead to death.

Indeed, in the city, it tends to be hotter during the day, and this heat does not manage to evacuate properly at night. This phenomenon called "heat islands" has several causes that accumulate. First of all, building materials in the city (asphalt, concrete, stone, cement) tend to retain heat. Light colors, helping to reflect the sun's rays are still quite rare in our Western countries. It also happens that the heat is trapped in the narrow streets of our agglomerations. Finally, the use of air conditioning contributes to the increase in urban temperature. This phenomenon is explained in the following two videos:

To better live these episodes of high heat, a solution has proven itself: revegetation!! Plants absorb light rays and organic matter (particularly CO2) which they transform into energy enabling them to grow: this is the photosynthesis. On the other hand they absorb water from the soil with their roots. This water then evaporates in the form of micro-droplets which contribute to cooling the ambient air: this is theevapotranspiration. Bringing plants to our cities would therefore help to lower the temperature there, while also providing areas of shade, which are essential in the event of high temperatures. Let's see together different examples to make our cities greener.

When we talk about vegetation, it's hard not to think of trees!! Indeed, these plants, certainly imposing, are also those which are the most effective in helping to lower the temperature. In addition to photosynthesis which allows them to absorb part of the sun's rays, their density also allows them to block part of the light rays and the temperature under a tree cover would be on average 4° lower only in uncovered areas. Evapotranspiration also allows them to reject up to 300L of water per day. Thus it is quite common to see cloud cover forming in forest areas. In cities too, this discharge of water can help regulate the temperature. Below, the wooded and shaded paths of various parks in the city of Reims. 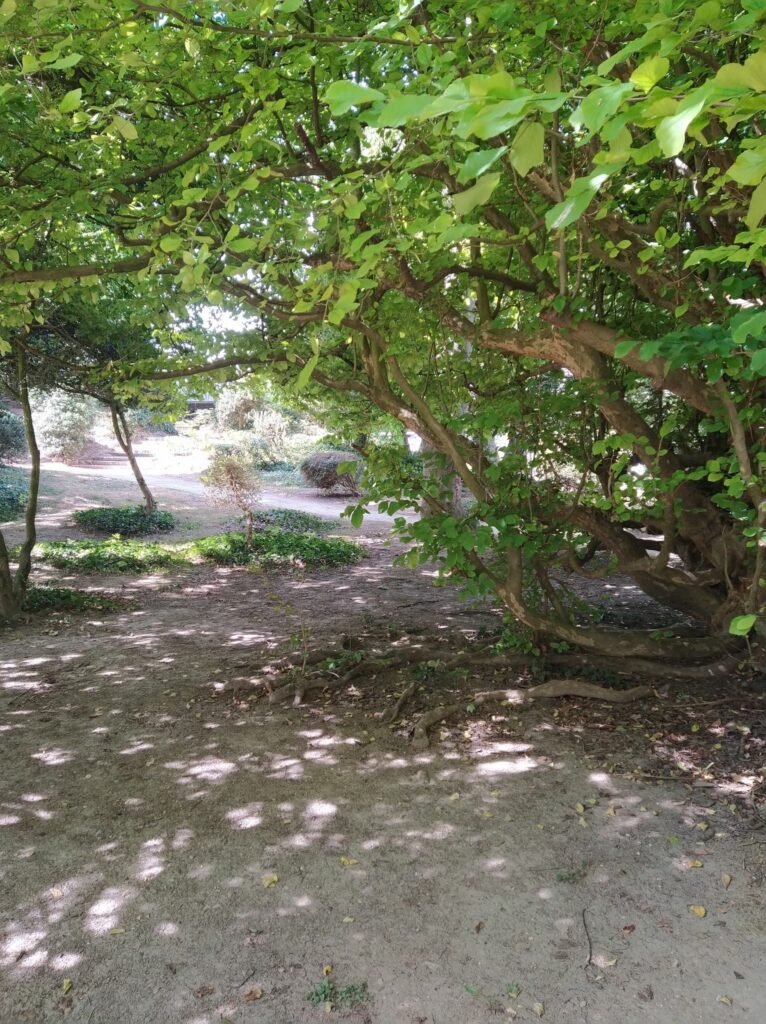 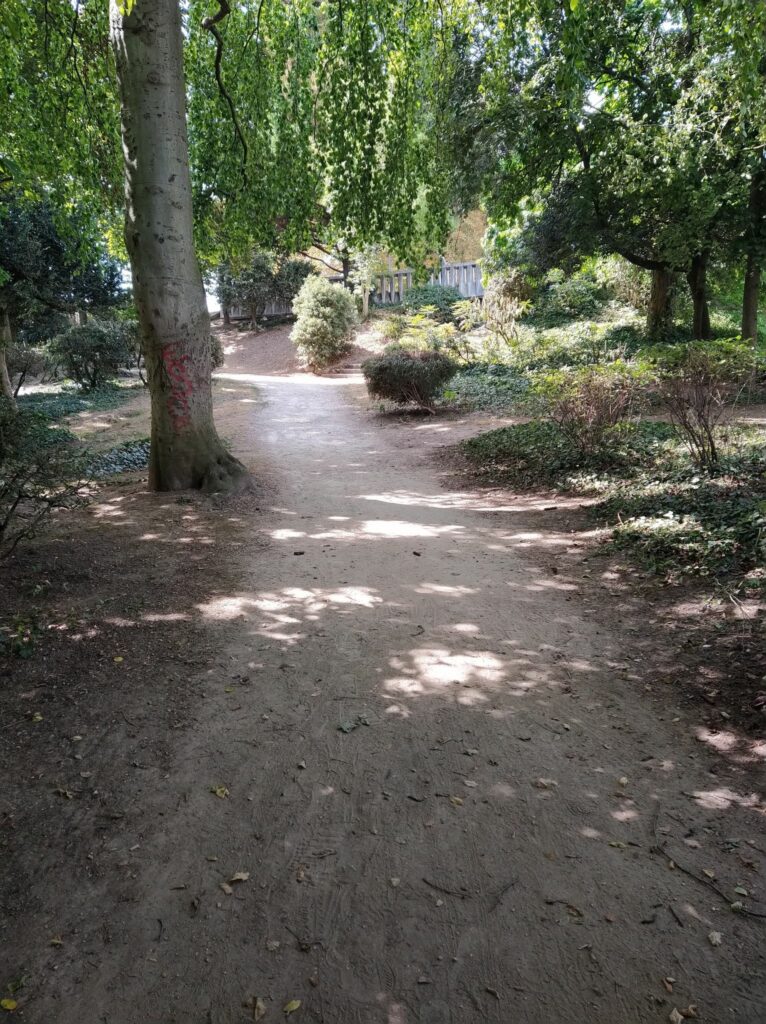 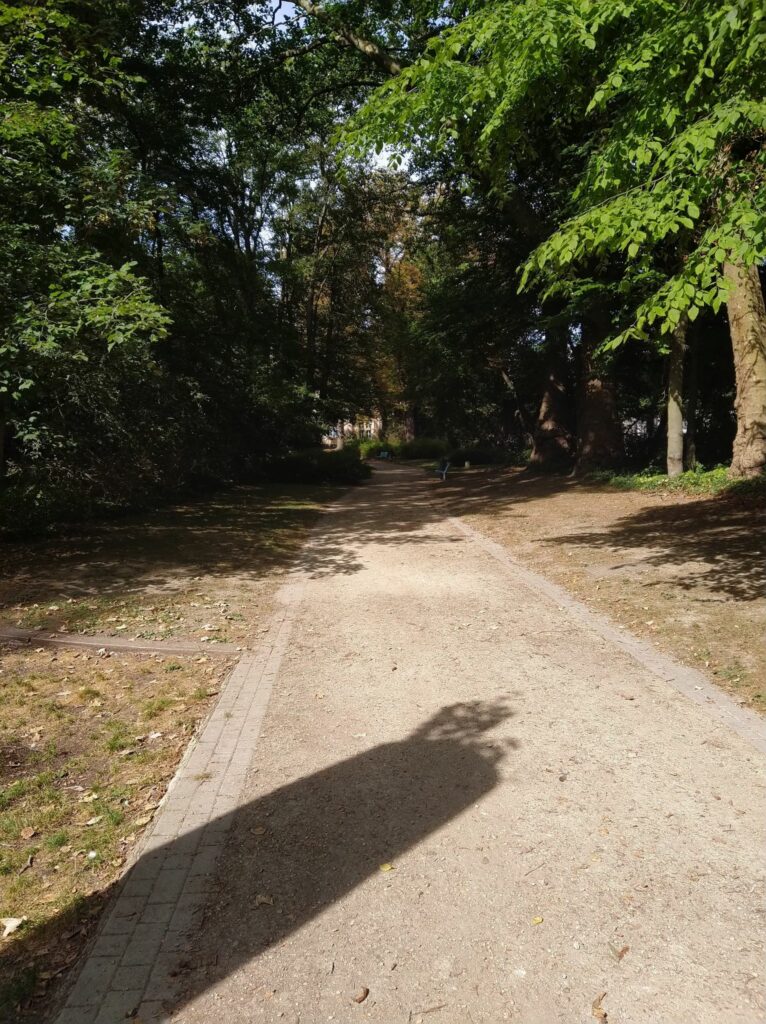 However, to be effective, planting must be thoughtful!! Initially, it is a question of identifying species adapted to the climate of the zone in which one wishes to plant them. Some trees, such as firs or spruces, are planted a lot because of their rapid growth. However, these species are impacted by global warming, suffering from lack of water or insect invasions (bark beetles, processionary caterpillars, etc.). They are therefore not necessarily good choices in the long term. Conversely, certain trees such as the holm oak prove to be particularly well suited to urban life, while being effective in absorbing pollution. The city of Metz has put online a series of 85 sheets listing the main local tree species. A series of criteria are included and noted to help determine the most interesting species to plant in urban areas.

Once the type of tree has been chosen, it is also necessary to find the right location for planting. Indeed, to be able to take advantage of the effects of evapotranspiration, the tree must receive a sufficient quantity of water. It will therefore be necessary to take care to leave an unpaved ground surface large enough at its foot so that water can infiltrate it, or to think about a system for redirecting rainwater so that it can properly benefit the tree. for its growth. 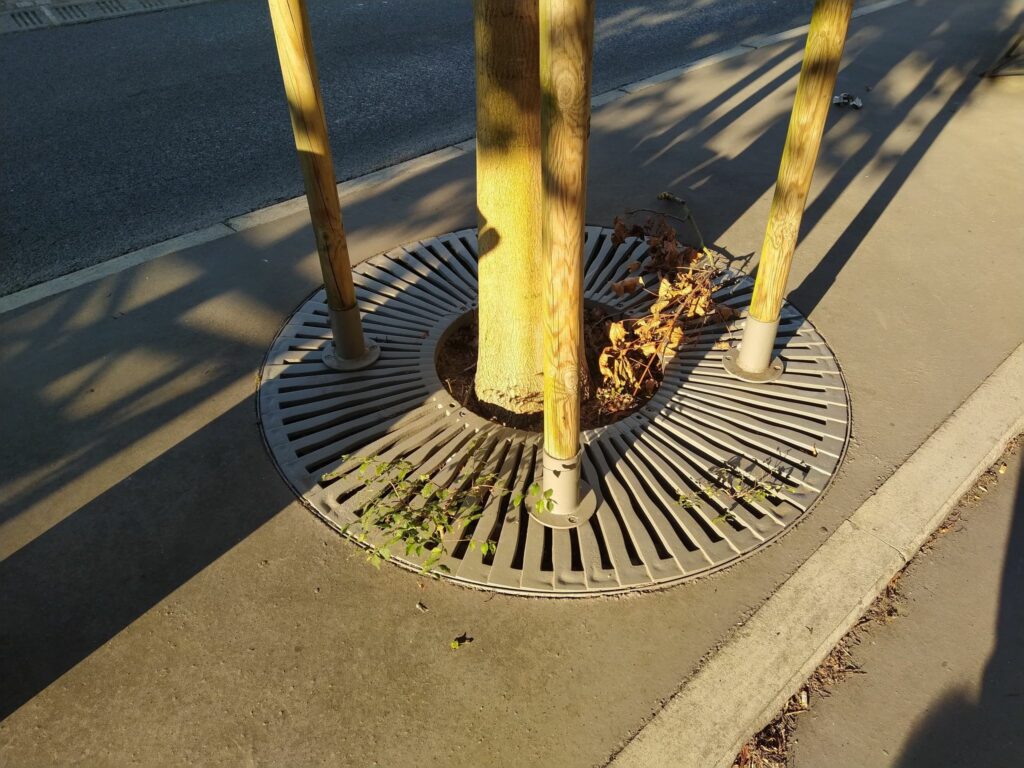 Here, this tree will hardly benefit from the rainwater which it would nevertheless need.

Sometimes it can be complicated to find space to plant trees, solutions can however be imagined:

In cases where the space does not allow the planting of trees, other initiatives, detailed later in the article, can be interesting to set up.

Urban revegetation has become essential to the preservation of biodiversity. Indeed, agricultural land, very often contaminated by pesticides, is no longer hospitable for insects whose populations are decreasing from year to year. But foragers and other insects are essential to the production of human food. To help them survive in our cities, a few very simple actions can be taken. Thus a city in bloom will provide them with sufficient food. It can therefore simply be a question of no longer pulling up the wild flowers that grow naturally in the middle of our lawns. 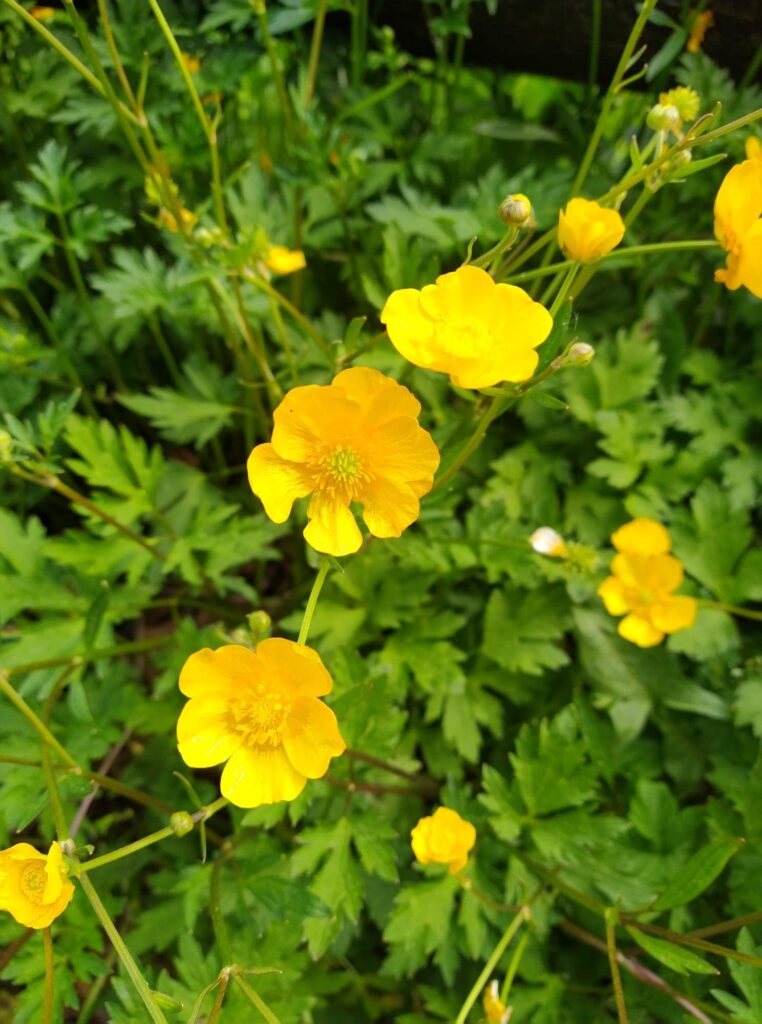 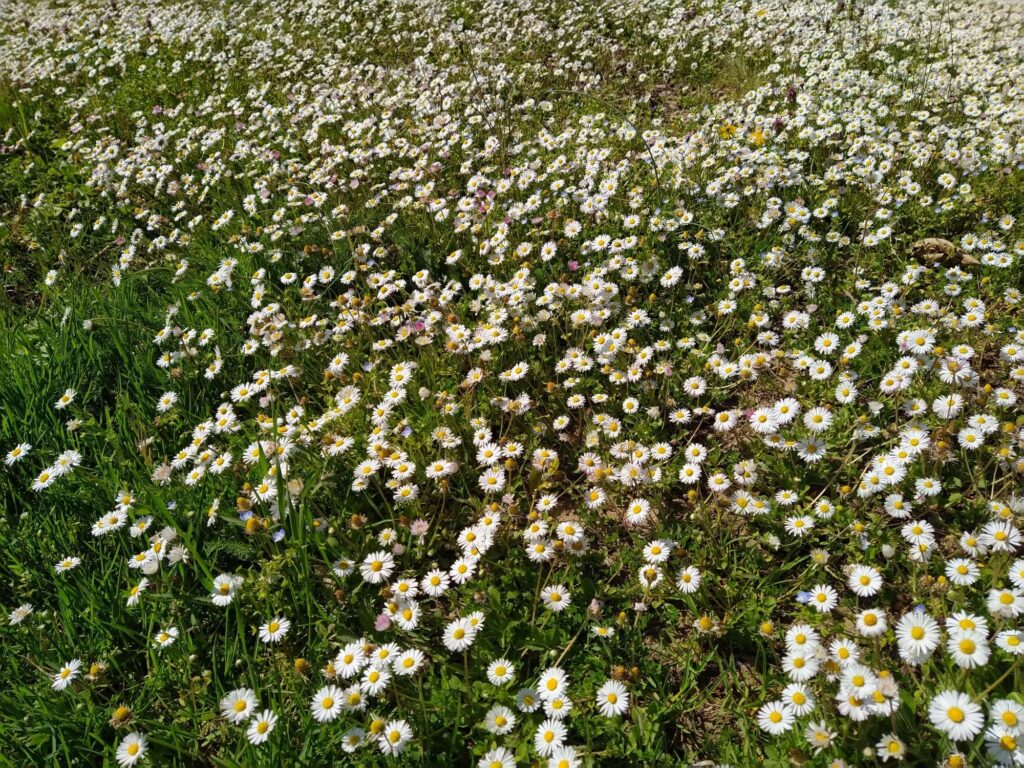 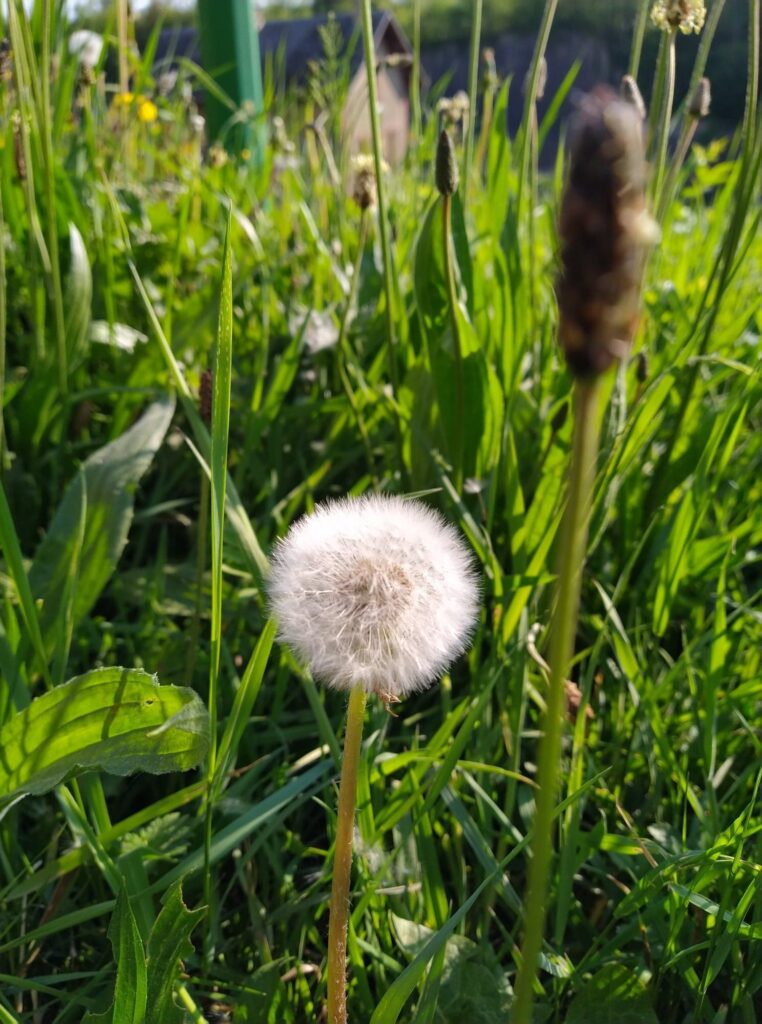 It is also possible to sow mixtures of field flowers which will give a touch of color to green spaces or within shared gardens. The establishment of these participatory gardens also brings life to the neighborhoods. It is also possible to make shelters for insects that can be set up there. This type of activity can easily be carried out in collaboration with schools and holiday centres. Insects, if present in good quantity, will also attract birds such as swallows.

Finally, it may be interesting to replace the mowing of green spaces with late mowing. This has many advantages:

Delaying the mowing of the grass allows it to stay green longer. It may be interesting to keep unmown areas in certain green spaces. This is, for example, what the city of Charleville does in several of its parks with the establishment of “biodiversity zones”: 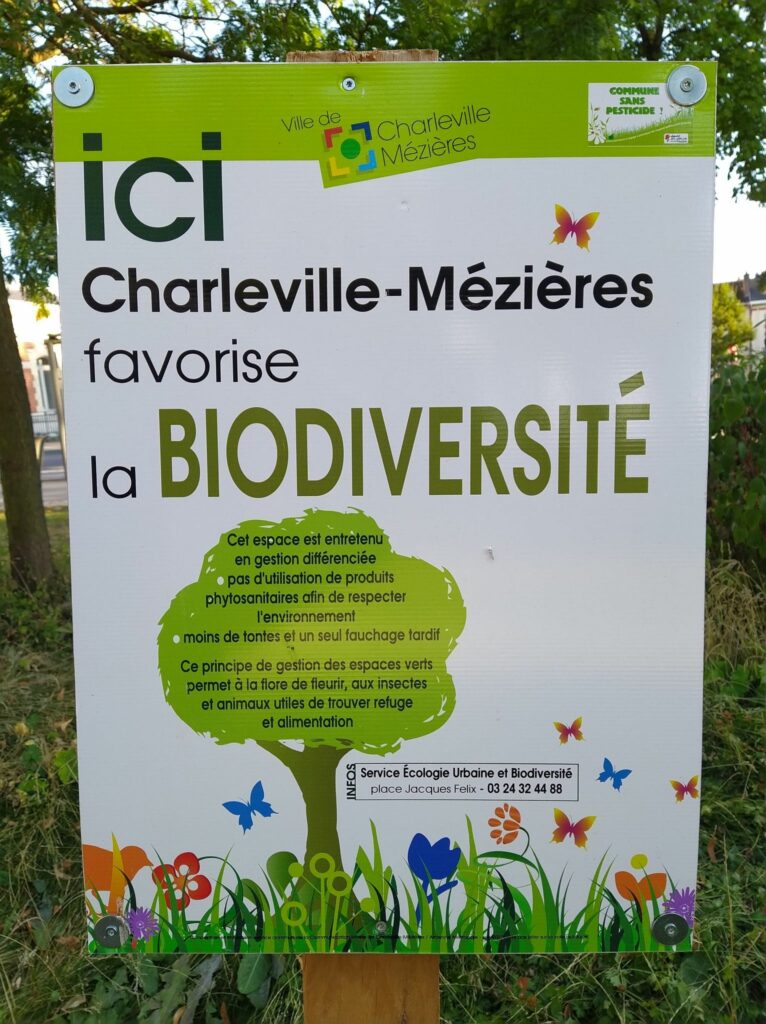 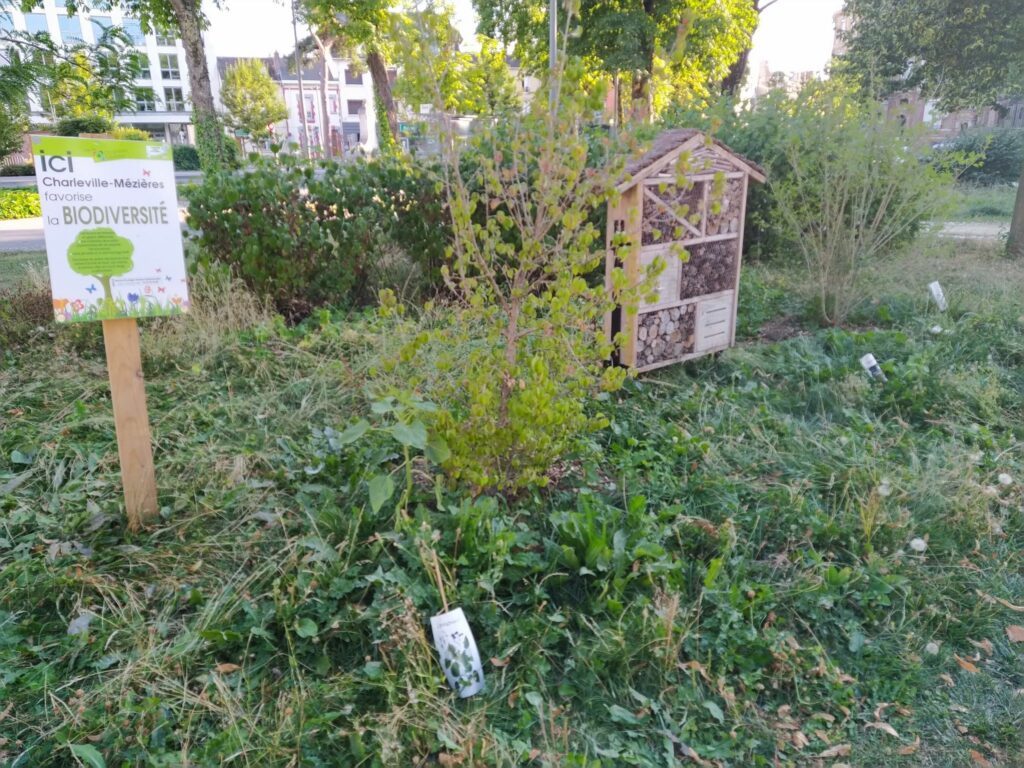 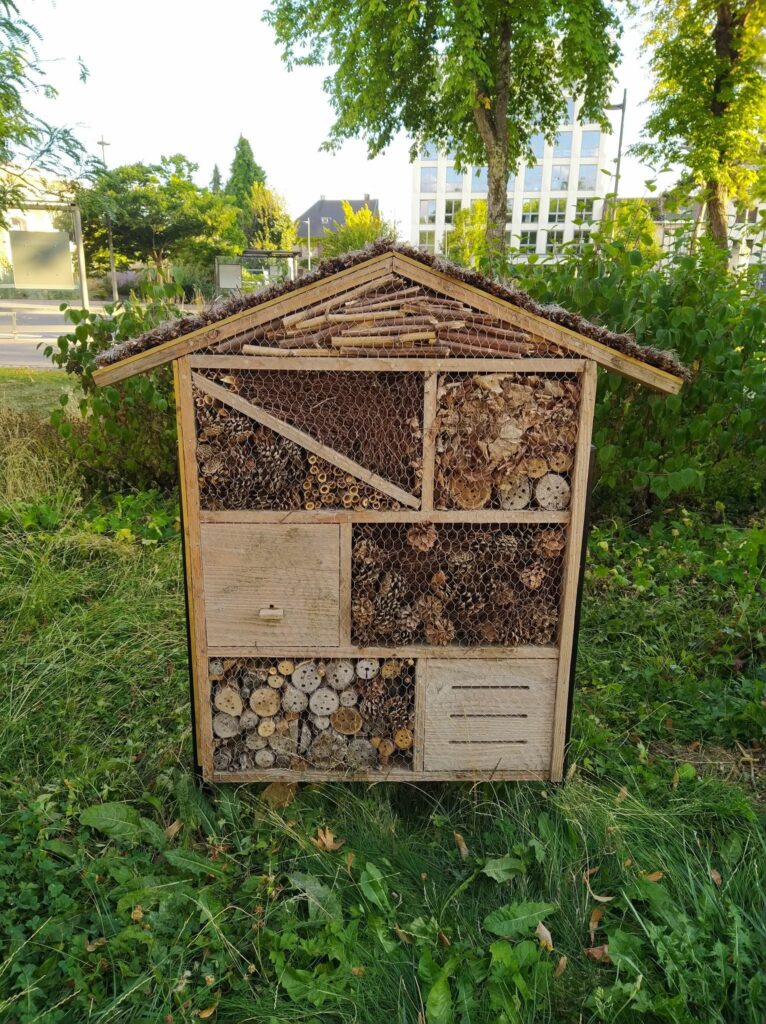 Planting can quickly take up space. It may therefore be advantageous to use for this purpose surfaces that have no other possibility of use. This is for example the case of the roof of our homes!! Whether it is a flat roof or a sloping roof, with a few adjustments, you will be able to grow depolluting moss and sun-resistant plants. This type of roof has the advantage of constituting effective insulation both against high heat in summer and against the cold in winter. 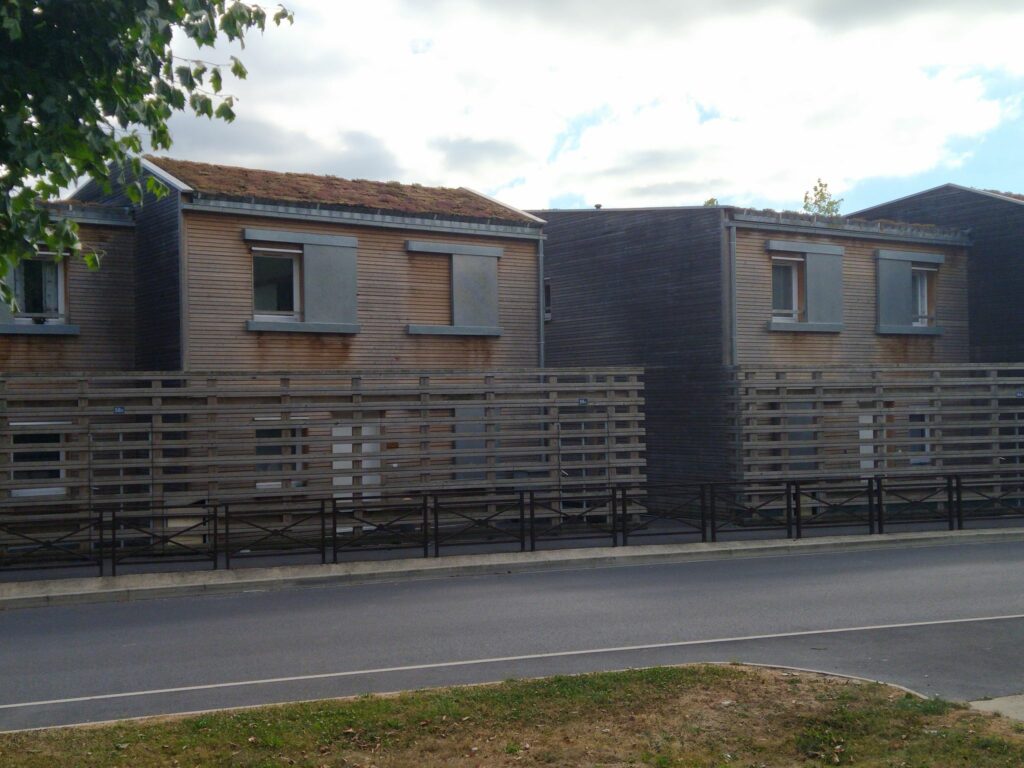 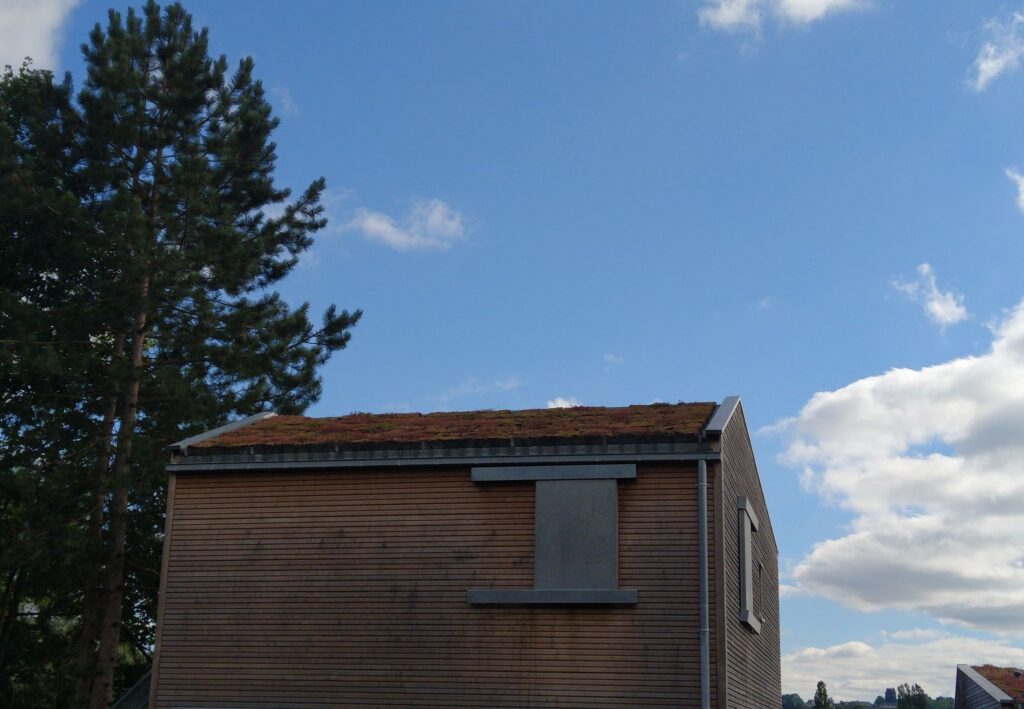 Once in place, the green roof will contribute in several ways to the fight against global warming. It will indeed be possible to install moss there, devoid of roots, thus effectively absorbing CO2 and fine particles. But also plants (essentially succulents), which will participate in evapotranspiration. Finally, the layer of substrate necessary for the survival of the plants will be of great help for the retention of rainwater.

The facades can also be vegetated. This was the subject of a article on green walls.

In the same idea of ​​revegetating unused spaces, it is possible to plant directly on the roof of the bus shelters present in all our French cities. This revegetation is however quite expensive (about 1000 euros per bus shelter), which probably explains why it is not yet very widespread in France. However, the supply is still starting to build up. JCDecaux, for example, offers several models of green bus shelters. A depolluting shelter, whose roof is simply covered with moss. A shelter with a green/flowery roof. And finally, a shelter with green walls. Adding an air filtration system through the green roof can also purify and refresh the air breathed by travelers. 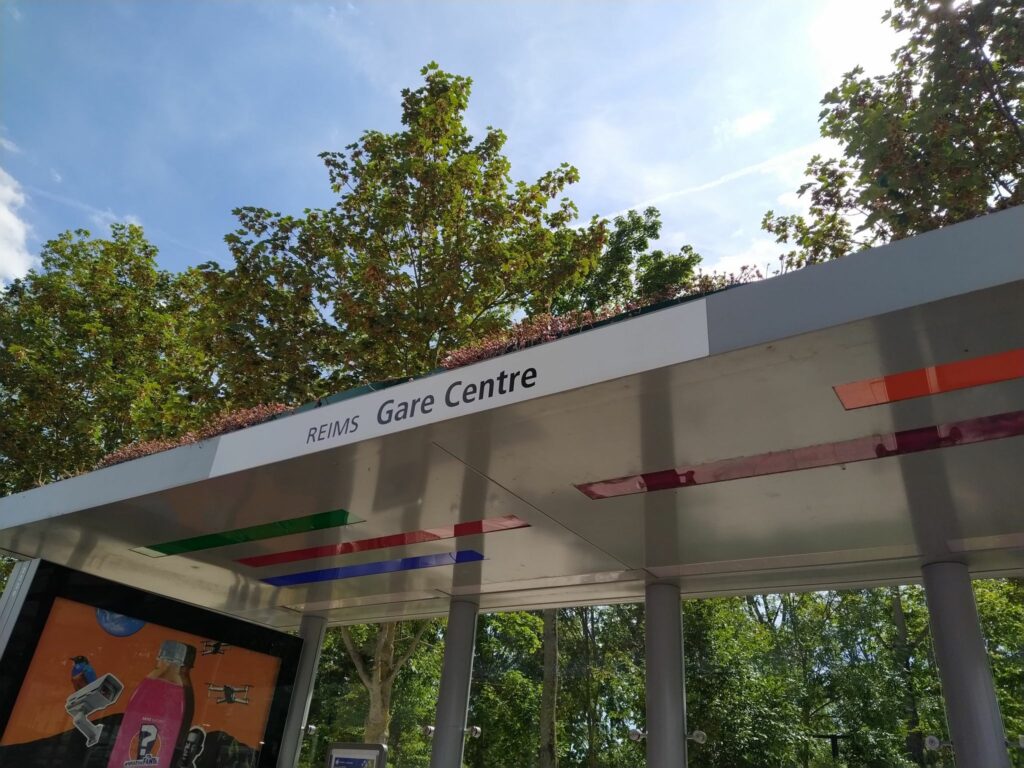 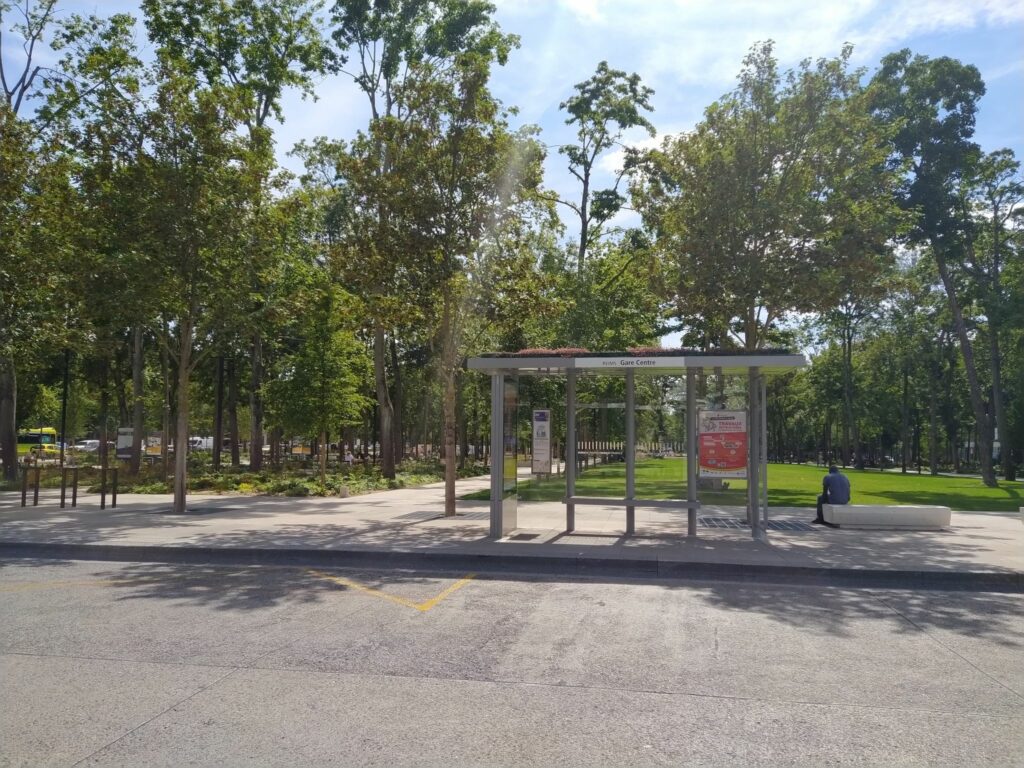 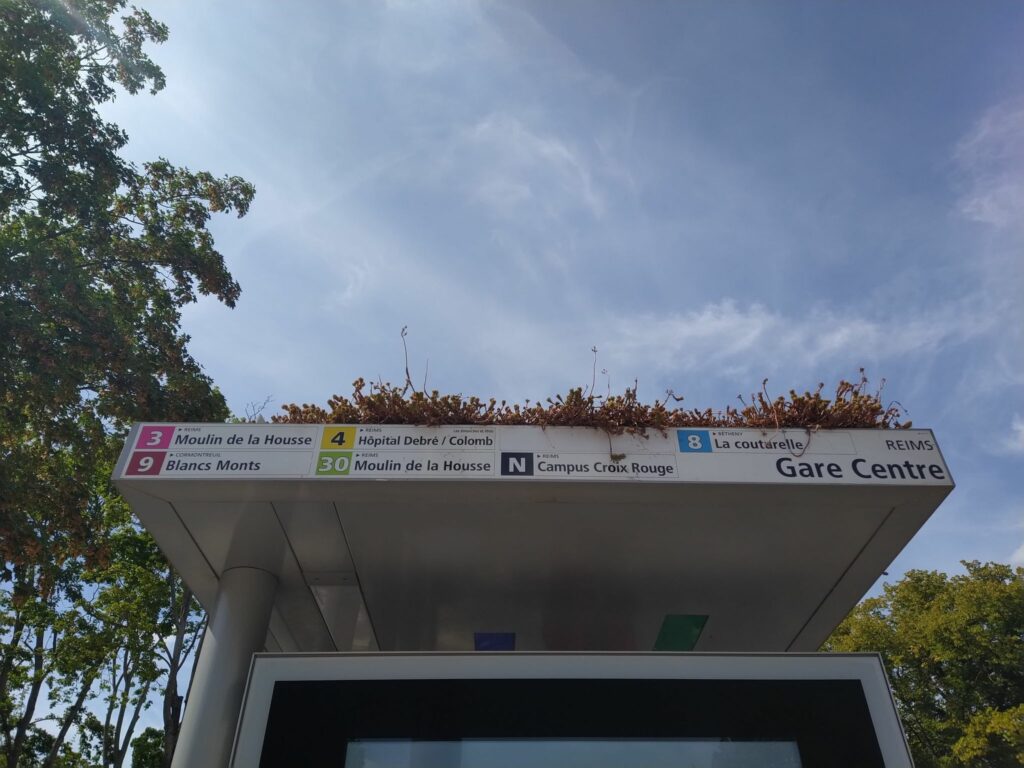 In Spain, or in Singapore, it is directly the roofs of buses that have been revegetated!! This solution has the advantage of being aesthetic, creating real mobile gardens, but also that of reducing the temperature inside the buses in summer. Here again, the price is on the other hand a brake since it takes about 2500 euros per bus to revegetate.

Initiatives to make our cities greener are not exclusively reserved for municipalities. So everyone can choose to plant in their garden or even on their terrace or balcony!! In a good-sized plot or garden, it may be worth planting a few fruit trees that will provide food, an umbrella tree under which to set a cool table, or any flowering tree/bush that will delight insects. On the balcony side, planting vertically can sometimes save considerable space. It is possible to sow many varieties including a good part of edible plants. Be careful, however, to stay within the framework of what is authorized by the city, and the owner of the building. Planters placed outwards from railings are often prohibited for fairly obvious safety reasons. The following video shows an example of greening on a balcony:

Some cities have implemented “vegetation permits”, allowing residents to cultivate certain urban areas freely. However, to be effective, this initiative must be followed and maintained by the inhabitants. Some cities, such as Paris, ended up backtracking because of unmaintained facilities which then had the opposite effect to that expected. 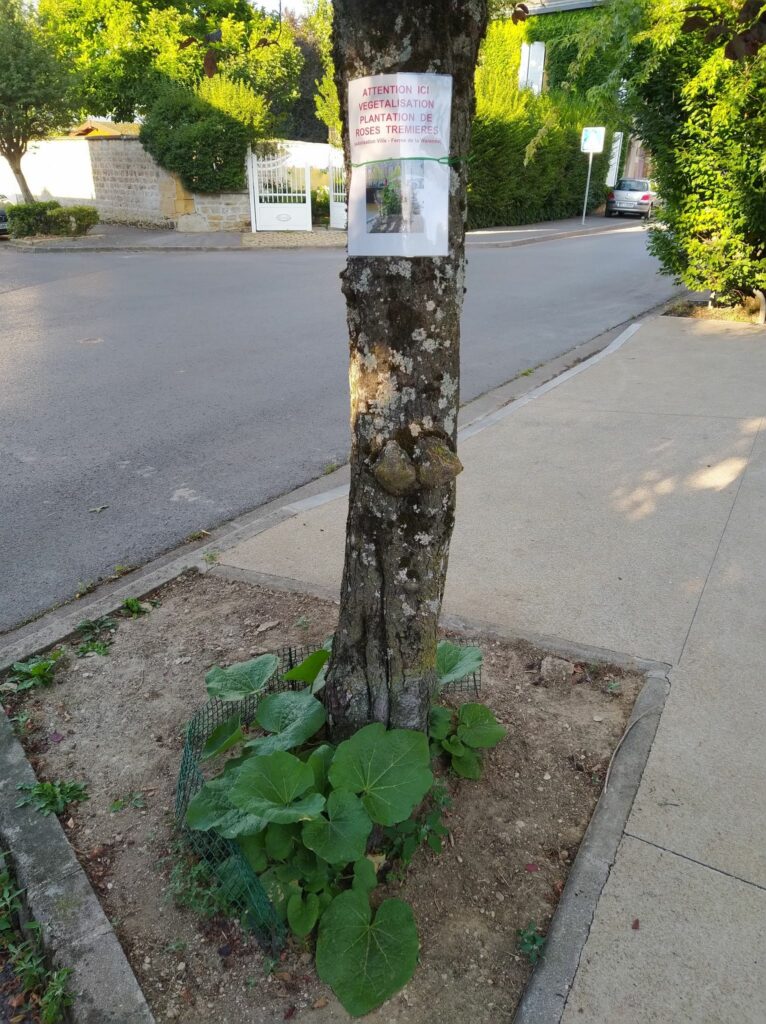 Greening in the city can also be accompanied by the establishment of other facilities such as games or sports trails. The ideal is then to make them using materials that respect the environment. Here is an educational trail made of wood in the Parc de la Patte d'Oie in Reims: 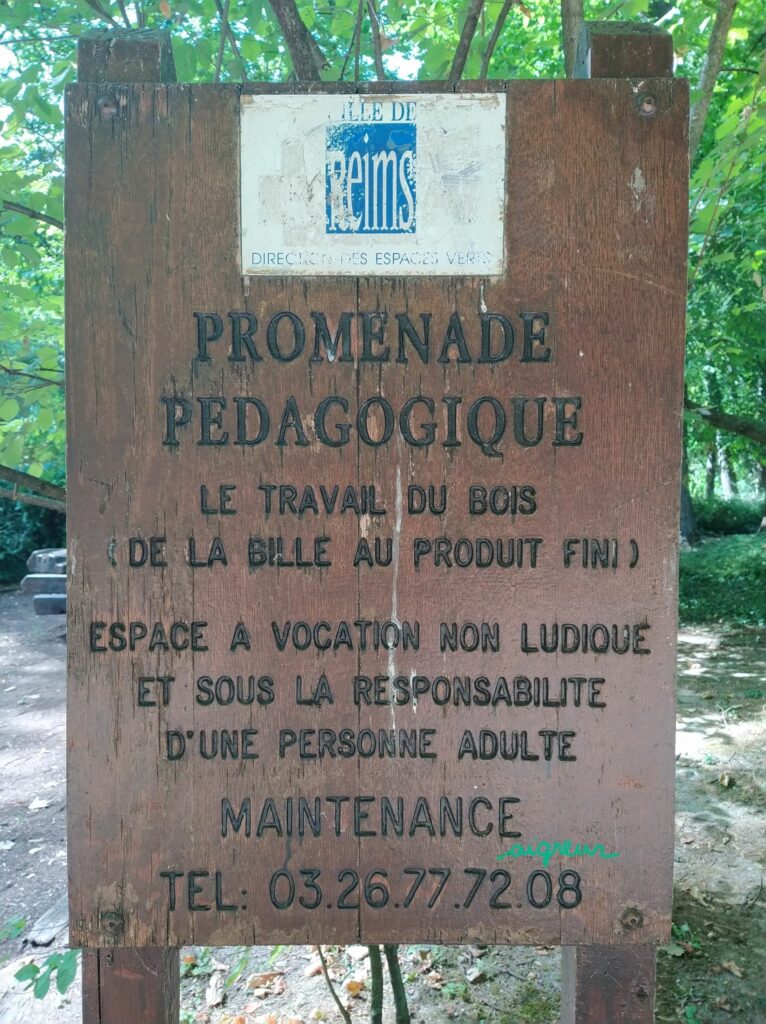 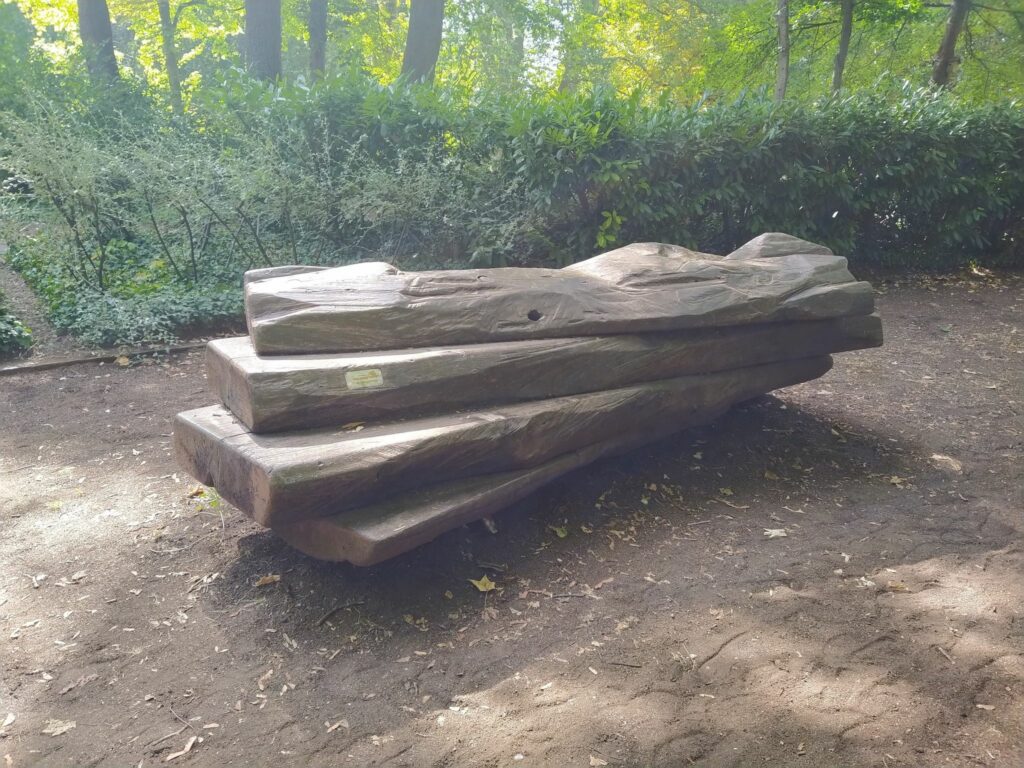 A question ? Visit the forum energy and global warming